Wood Plaster Paint. The artist creates sculpture as a condensation of his experience: the movement of the work is thus the mirror of an emotional practice embodied in the space. 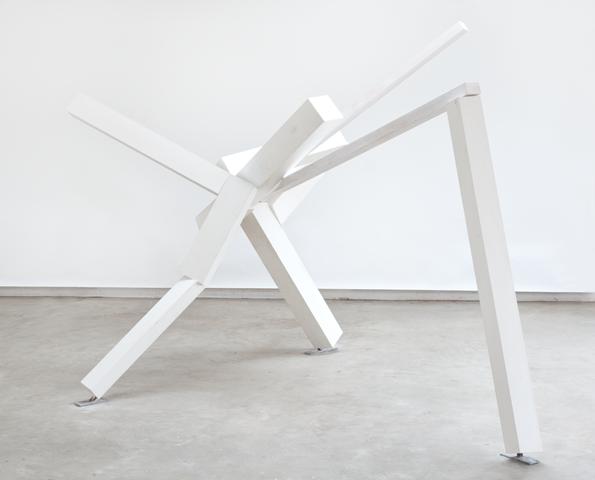 Galerie Karsten Greve is pleased to present the Wood Plaster Paint exhibition devoted to Joel Shapiro. Fascinated by the deployment of matter in space, the New York artist creates sculpture as a condensation of his experience: the movement of the work is thus the mirror of an emotional practice embodied in the space, which gives life to an art of vibration and ecstasy. The exhibition presents works of diverse materials and practices produced from the 1980s. Although different, each work has the characteristic of demystifying assumed categories as declaimed between figurative, abstract or conceptual art, thus bringing attention to the hic et nunc of the work.

The perception of Joel Shapiro's works is possible only when we consider the form as a language in itself, giving up, at least initially, any verbal description. The artist's work has always been centred around the notion of space and the experience that is made of it: growing in all directions, the shapes of the sculptures spread out in the rooms, invading the three dimensions of which they consist. The goal of the artist is the freedom of the sculpture, both in its lightness and its attachment to the ground. In this way the works establish a dynamic relationship with the viewer that is made of proportions, distances and directions. So as not to prejudice this dialogue, Joel Shapiro removed the base of his sculptures in the 80's, which like a frame or a stage set, have the dark power of distancing the art from the world.


The dynamism of Joel Shapiro's sculptures derives mainly from two aspects: the disposition of elements and their colour. The artist begins to paint wood to somehow transform it: colour makes it possible to change the shape, to enrich it with a meaning that would otherwise escape it. An element is made thicker and more voluminous if painted black, for example: the colour modifies our perception of the shape and, consequently, the presence of the material to the observer. In this sense, if the sculpture keeps the memory of the movement, the colour helps to evoke it. The creative process is itself done by becoming: the artist reworks the configuration redesigning the layout of elements until he finds a form that makes sense, since the form, beyond words, means something.

Joel Shapiro's work comes in various techniques and materials: the corpus consists of drawings, sculptures in bronze, iron, plaster, clay and wood. Cast from a wooden mould, the bronze keeps all the details of the previously worked materials: the veins and other irregularities are thus fixed in metal, witnesses to a vitality that remains visible. Joel Shapiro's sculptures sometimes take the form of architectural installations: interconnected by wire, nails or screws, the elements composing the work form suspended constellations in perfect and almost ideal balance. The viewer can then enter the space inhabited by the work and roam around.

Though the viewer is undoubtedly free in their perception of the work and can attribute to the shapes whatever they believe they recognize in them, Shapiro's sculptures are not voluntarily figurative: they evoke something without explicitly representing it. What is interesting in his work is that, although not figurative, it is not abstract either. The sculptures are invaded by an attitude, an approach that sometimes recalls an entity without however directly signifying it. It is therefore a sculpture that is vital and full of possibilities that is not the synthesis of anything in particular and which always strives for the vibration in the work: sculptures by Joel Shapiro condense an action, a movement that passes from one element to another and which thus makes it possible to feel the space.

Joel Shapiro was born in 1941 in New York, where he lives and works. He has received awards from the Royal Swedish Academy of Arts in 1994 and the American Academy of Arts and Letters in 1998. In France, the artist was appointed Chevalier des Arts et des Lettres in 2005. In 2013 the United States awarded the prestigious National Art Award for Outstanding Achievement. Among his most important public commissions include those for the Holocaust Memorial Museum in Washington and the Embassy of Ottawa. His works have included numerous international collections such as the MOMA, the Metropolitan Museum in New York, the Centre Pompidou and the Tate Gallery.