Chris Jones's sculptures are constructed from materials most have come to disregard, abandon due to the rise of the internet and technology. 'Along the Line' features the works by Charles Hinman, Jong Oh and Florian Schmidt. 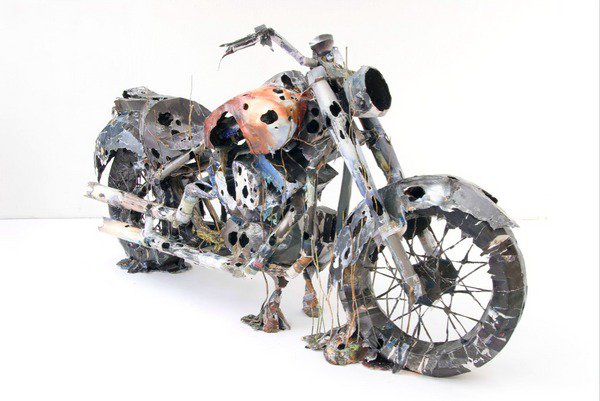 MARC STRAUS is pleased to present British sculptor Chris Jones' second solo exhibition at the gallery on view from May 4 – June 22, 2014.

Jones's sculptures are constructed from materials most have come to disregard, abandon due to the rise of the internet and technology – books, magazines, atlases, and encyclopedias. With these soft materials, the artist spawns sculptures that tell a story. The objects Jones delicately fashions force the observer to look deep into each layer, beyond the surface, to create a personal narrative based on the carefully selected and precisely placed imagery. Through this process of deconstruction and reconstruction we find ourselves, the viewer, now looking at familiar objects - a life-size Shelby Cobra car, a shopping bag, a brown paper bag lunch – and generating a different significance through the new life that Jones has assembled and appropriated.

The work of these three artists is connected through the use of straight lines, a removal of extraneous materials, and crisp formalism. However, to categorize them as minimalists as we are apt to does not fit comfortably. I think of artists with whom I started: Ellsworth Kelly, Carl Andre, Dan Flavin, and Donald Judd. Their art was severe, little outside the bounds of hard-edge and ninety degree angles; unemotional and fully planned. Even Kelly made precise preliminary paper constructions. Instead, while Hinman, Oh, and Schmidt are in the genre of minimalism, their work is largely informed by intuition and is altered in the making of it.

Charles Hinman (b. 1932, U.S.) rapidly came to the forefront of contemporary art in the mid-60’s with unorthodox shaped hard-edge canvases. Like Kelly a decade older, there is elegance in the relationships of shape and color, but Hinman pushes into the third dimension before Kelly employed curves and various angles. These were also precursors to Kenneth Noland’s shaped canvases at the end of the 60’s. There is greater alignment perhaps with Frank Stella in the 60’s. Hinman has hued to his own language and over five decades makes work that is consistently inventive and fresh.

Jong Oh (b. 1981, Korea), uses hand-painted strings, sheets of Plexiglas, and impossibly thin chains, to make work that reminds us of the formalism of Fred Sandback. Although a better understanding of Oh’s work would be a comparison with Richard Tuttle’s early career, which smacked of formalism (the shaped canvas pinned to the wall, bent wires with false shadows) but in the end were completely intuitive. Oh’s work is mostly site-specific; he assesses a space, museum or home, and begins to work, and the end result is unpredictable and elegant. More heart than calculation. They are like tone poems.

Florian Schmidt (b. 1980, Austria) is a painter of primarily two dimensional works. They are grounded in minimal abstraction, but his surface colors, textures, and depths vary. In some ways they synthesize the lineage that includes Barnett Newman and Brice Marden with the structural and three-dimensional aspects seen in the work of Europeans like Imi Knoebel and Dutch post-Rietveld. Schmidt shows a delicacy, a perfect intuition, in his details. The imputed formalism seen at a distance thaws when rough seams, stapled joints, and asymmetrical sections are increasingly obvious as we draw near. The paintings are beautiful without conceit.