The portraits selected for 'Sam Doyle: The Mind's Eye - Works from the Gordon W. Bailey Collection' exhibition are testament to his commitment to honor his culture and celebrate the ground-breaking achievements of important figures in entertainment and sport. 'Night in Day' includes a wide range of photographic nocturnes from a southwest moonrise to an impossibly bright Antarctic midnight. 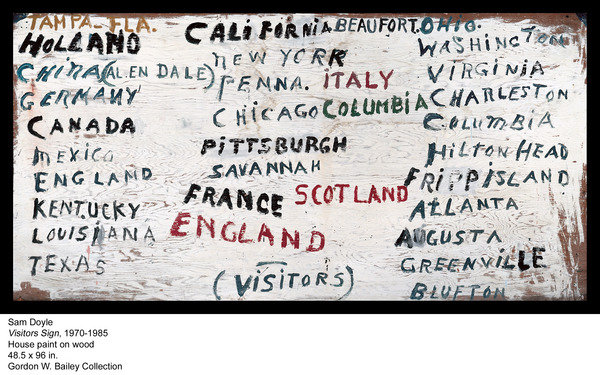 (Los Angeles—April 25, 2014) The Los Angeles County Museum of Art (LACMA) presents Sam Doyle: The Mind’s Eye - Works from the Gordon W. Bailey Collection, opening May 3 and continuing through August 17, 2014. Sam Doyle was born in 1906 on Saint Helena Island, South Carolina, the center of the region’s Gullah community where African cultural influences thrived. He began making paintings on cast-off sheet metal and wood panels in 1944; most were portraits of people and events important to his community. He placed the paintings in the yard of his clapboard house in a museum-like display.

By the time Doyle retired in the late 1960s, his history lesson had evolved into the St. Helena Out Door Art Gallery and attracted the attention of LACMA’s former curator of twentieth- century art, Jane Livingston, who, at that time was Associate Director and Chief Curator at the Corcoran Gallery of Art in Washington, DC. She invited Doyle to participate in Black Folk Art in America: 1930-1980, a seminal event that traveled and introduced the islander’s impassioned artwork to a much broader audience including artists such as Jean-Michel Basquiat — who collected Doyle’s works — and Ed Ruscha.

Known for a wide-ranging palette of vibrant colors, Doyle’s approach to painting can be characterized as gestural figuration. The artist composed his figures sign-like and painted in a style that is flat and frontal. The industrial or even architectural materials on which he painted also suggest this reading. Doyle’s works are to be read both visually and literally as many include painted words which he added to further inform the viewer about his subjects who were not just interesting people but unique personalities.

The portraits selected for this exhibition are testament to Doyle’s commitment to honor his culture and celebrate the ground-breaking achievements of important figures in entertainment and sport.

All works come from the collection of Los Angeles-based Gordon W. Bailey.

About the Artist
Sam Doyle (1906 – 1985) was born in South Carolina on Saint Helena Island where Penn School was established in 1862 to provide education and vocational training to newly liberated freedmen. Doyle attended the school until family hardship forced his withdrawal. Imbued with a profound appreciation of history by his elders and drawing strength from his devout faith, Doyle fully committed to painting the history of his beloved Gullah community and more generally African American advancement.

Using discarded materials — primarily metal roofing, plywood and house paint – Doyle created a stirring oeuvre of expressive portraits which includes two important series: “First” (achievement) and “Penn” (school). The creolized Gullah language was Doyle’s first and his creatively-spelled, painted words further enhance his works and inform the viewer. The artist summed up momentous events with poetic simplicity and had a genius for distilling the essence of personality. His paintings are often so deftly executed that they achieve iconic status.

Aficionados traveled from around the world to view Doyle’s outdoor history lesson. He commemorated many of their visits by painting their hometowns or countries of origin on a 4ft x 8ft plywood panel. As evidenced by his “Visitors” sign, Doyle’s influence is far and wide. The late Jean-Michel Basquiat once traded some of his own artworks to a gallery owner for a few of Doyle’s and noted contemporary master Ed Ruscha paid posthumous tribute to the artist with his painting Where Are You Going, Man? (For Sam Doyle), 1985, now in the collection of Eli Broad, and has cited Doyle’s influence, once commenting: “When I look at his pictures alarm bells go off, warning me of their power.”

Since the invention of photography, artists have looked to the night as a rich subject for photographic exploration. Between sunset and sunrise, when the responsibilities of the day give way to the autonomy of the night, the world takes on a mysterious glow that is rich with metaphor and innuendo.

The exhibition title, Night in Day, references a poem by Joseph Stroud that reflects on those slivers of the night that punctuate our days, literally and symbolically. This exhibition includes a wide range of photographic nocturnes from a southwest moonrise to an impossibly bright Antarctic midnight, from a silhouetted figurative sculpture to the piercing eye contact of a costumed reveler, and a misty landscape that assumes the look of midnight through the use of infrared film. Selected from LACMA’s collection and spanning the last 100 years, the exhibition includes work by Ansel Adams, Berenice Abbott, Larry Clark, Florian Maier-Aichen, Edward Steichen, Karl Struss, and Hiroshi Sugimoto, among others.

About LACMA
Since its inception in 1965, the Los Angeles County Museum of Art (LACMA) has been devoted to collecting works of art that span both history and geography, in addition to representing Los Angeles's uniquely diverse population. Today LACMA is the largest art museum in the western United States, with a collection that includes over 120,000 objects dating from antiquity to the present, encompassing the geographic world and nearly the entire history of art. Among the museum’s strengths are its holdings of Asian art, Latin American art, ranging from pre-Columbian masterpieces to works by leading modern and contemporary artists; and Islamic art, of which LACMA hosts one of the most significant collections in the world. A museum of international stature as well as a vital part of Southern California, LACMA shares its vast collections through exhibitions, public programs, and research facilities that attract over a million visitors annually, in addition to serving millions through digital initiatives, such as online collections, scholarly catalogues, and interactive engagement at lacma.org. Situated in Hancock Park on over 20 acres in the heart of Los Angeles, LACMA is located between the ocean and downtown.