Plausible Deniability. Gianni Motti's actions oscillate between the rational and the irrational, between irony and provocation, between rumor and misunderstanding. Which is why Motti's events are experienced mainly through the narrative and illustrative potential of photographs made by onlookers - the standard art crowd only has second-hand material at its disposal. 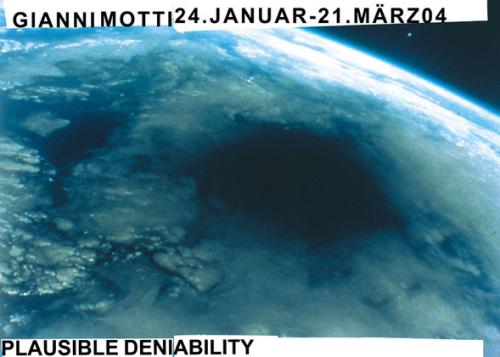 "My acts are not fictions. The 1986 Challenger explosion and the 1992 Los Angeles earthquake really were my doing."

He celebrates his own funeral, masquerades as a professional soccer player, speaks in the name of the people of Indonesia at the UN Human Rights Convention, causes earthquakes and repeatedly mimes the evil terrorist who secretively infiltrates a system, causing it to implode from within.

Gianni Motti (*1958) enjoys confusing his audience. He has appropriated subversive modes of behavior like no other artist before him. The fact that he often puts himself in dangerous situations does not seem to interest Motti in the slightest. The events he subverts, with surgical precision, can be of political, cultural or social character, and always include the unexpected. The audience and its horizon of expectation is not to be pandered to - Gianni Motti doesn't see himself as an artist who partakes in the culture of spectacle like some court jester, but as a universal activist of sorts, one who unveils the functions of different systems, sometimes destroying them in the process. From the very beginning, to escape from professional pressures and sensationalist demands, Gianni Motti celebrated his own funeral during the Saint Marta ceremony in Ribarteme Vigo, Spain, on July 29, 1989. Lying in an open casket, he was carried through the streets, already filled with crowds of people attending the festivities. Only when the coffin was already placed in the grave did the artist stand up and flee. The mourners' reactions were indeed unexpected. Emotionally overwhelmed and out of control, they began tearing at the resurrected figure before them.

Gianni Motti's actions oscillate between the rational and the irrational, between irony and provocation, between rumor and misunderstanding. Which is why Motti's events are experienced mainly through the narrative and illustrative potential of photographs made by onlookers - the standard art crowd only has second-hand material at its disposal.

For several years, Gianni Motti has been observing the RaÃ«l Sect. RaÃ«lians believe that aliens landed on earth 25'000 years ago, and created human beings, animals and plants through cloning technologies, out of dead material. According to their own latest figures, the sect counts 55'000 devotees. It was founded in 1973 by French journalist Claude Vorilhon, who calls himself RaÃ«l and lives in Quebec, Canada. In 1997, he founded the Clonaid society in Las Vegas. In Motti's newest video piece, Ufo-Cult (2003), one sees sect leader RaÃ«l and Brigitte Boisselier, the doctor who claimed to have cloned the first baby on December 26, 2002. The two are standing in an idyllic landscape, smiling and popping soap bubbles. Is the bubble a symbol for childhood regained, or a mere delusion that is about to burst?
The migros museum fÃ¼r gegenwartskunst will publish a complete biography of the artist Gianni Motti.

The migros museum fÃ¼r gegenwartskunst is an institution of the Migros Culture Percentage.