The major contemporary art event in Africa. "Producing the common" is the central theme of the 11 international biennale; artists and curators seek to link politics and aesthetics in a vigorous and engaged way. A rich program to discover in 5 venues and in numerous cities of Senegal. 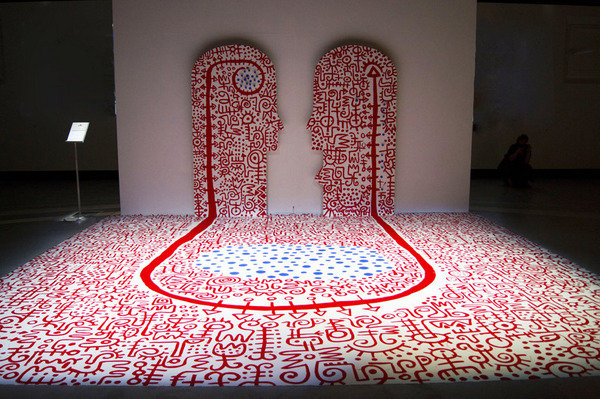 The International Exhibition of African and African diaspora artists is the main event of the Biennale. The selection is entrusted to the curators of Dak’art 2014: Elise Atangana for selecting the diaspora, Abdelkader Damani for North Africa and Smooth Ugochukwu Nzewi for sub-Saharan Africa. The selection is the combined result of artists invited by the curators, eight for each curator, and artists selected on the basis of portfolios provided by the artists or their representatives.

At this international exhibition are added four other events: an exhibition of guest artists dedicated to cultural diversity, the exhibition of African sculpture, Tributes exhibitions and Dak’Art into the Campus.

"Producing the common"
"All over the world biennial exhibitions multiply with the aim of creating a global image. Some might see it as a clear manifestation of globalization, a most exasperated expression, and a repetition of contemporary art exhibitions in a never-ending quest for novelty. For others, including us, the multitude of art biennials is an attempt to find “globality” and a common desire to produce a feeling of a singular world (Tout-Monde) in each place, a term coined by Édouard Glissant. What Glissant calls the "Whole-World,” is "our universe that is ever changing yet remains the same, and the vision that we have of it."

“Producing the common” is our central theme for Dak’Art 2014. With this theme, we seek to link politics and aesthetics in a vigorous and engaged way. Is the encounter of works of art in a specific place, the art exhibition, not an attempt to instantly produce the public space which people seek through movement and protests?
Most contemporary artists see politics as the prism through which they receive and interpret existential reality. They engage reality in their works and consequently involve their work in reality. Aesthetics is shaped by a wealth of forms and approaches used by artists to make their work legible. Thus, if politics is a way of communicating in the public space, is art therefore the base?

Art, more than any other domain, creates a chain of relations between men and women, but also the interplay between humanity, nature and the Universe. Artists’ creations must possess the vital force in order to command the attention of audiences. Art should be able to take into account common aspirations, fears, hopes and daily struggles with the utmost sincerity. That is why we think of the exhibition as the “distribution of the sensible,” to draw from Jacques Rancière. It is why we share his point of view of linking politics to art and aesthetics.

Our framework, “to produce the common”, is a conscious act of engaging what is collectively shared, and to take into account what affects everyone, the “Whole-World”. For Dak’Art 2014, we are interested in new modes of address used by contemporary artists (from Africa and elsewhere) in thinking critically about art and the artistic process as a public vocation, and as part of the whole.
A timetable for video screening and cinema, as well as interventions in public spaces, completes this program for Dak’Art 2014, anchored in both reality and the imaginary. We hope this ensemble will provide a space and time to think about art, politics, and affirm that being together is the only horizon for human creation. "
By the curators: Elise Atangana, Abdelkader Damani, Smooth Ugochukwu Nzewi.

8th May
Opened only to journalists, partners and officials accredited with their badge.
16h- Press conference with the curators : Elise Atangana, Abdelkader Damani, Smooth Ugochukwu Nzewi

Dakar venues
Secrétariat Général de la Biennale des Arts de Dakar 19, Avenue Hassan II Dakar RP
Dakar, Sénégal
From May 9 to June 8: exhibitions are open daily, including Sundays and bank holidays from 10 to 18h30. For Dak’Art into the Campus at theUniversity Cheikh Anta Diop from 9am to 21h, May 9 to June 8, daily.