Jeff Rankin chose woodcut as his medium for his exhibition 'Learning to Dance'. Isabel Mertz present sher first exciting solo exhibition as part of tour in South Africa and Lesotho in 2014. 'A Celebration of Sekoto: The Life & Song of Gerard Sekoto' features his life, art and music. 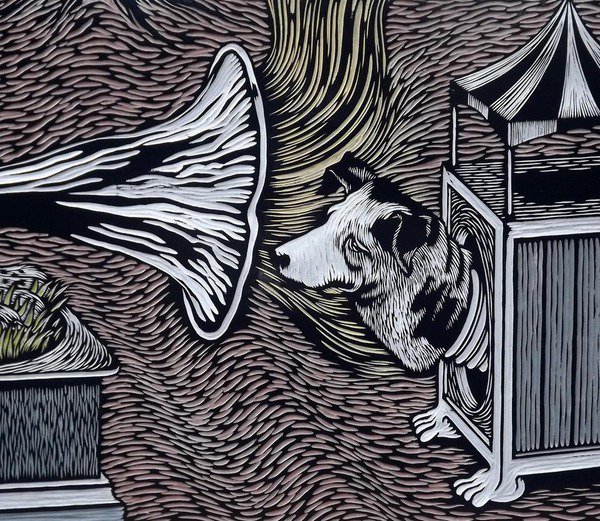 Learning to Dance, a unique collaboration between artist and poet, will be on view at the KZNSA’s Park Contemporary Gallery opening Tuesday evening.

In 2012 Durban artist Jeff Rankin, now based on the Eastern Cape’s wild coast, was commissioned by Doug Knox (aka the poet Wylde) and his wife Shalane to produce work for their new Durban home. Inspired by Shalane’s request that willow trees appear, and Wylde’s huge volume of online writs, Rankin chose woodcut as his medium. That choice turned a large project into a titanic challenge: the exhibition celebrates this 2-year labour of love.

The artwork includes 16 fine prints in limited edition, as well as the original finely cut hand-coloured woodblocks from which the prints were made. The prints are for sale. Also on show are an installation of printed fabric panels, made from huge woodcut pieces for the project. Artist and writer are interviewed in a short video on site. The artist has used selected extracts of Wylde’s poetry throughout much of this work, reminding the viewer of the link between word and image. Rankin has had several successful solo exhibitions in Durban. The work is always special, and this show is no exception.

2011 Gerard Sekoto Prize Winner, Isabel Mertz, will present her first exciting solo exhibition as part of tour in South Africa and Lesotho in 2014.

Mertz recently returned from Paris where she took up her prize and now, this touring exhibition is another part of her prize.   Mertz explains the idea behind the title of the exhibition, The Problem of Crossing a Bridge, by quoting Heraclitus, “no man ever steps into the same river twice, for its not the same river and he is not the same man" Mindful of this understanding, the artist’s work is presented as a journey that is not quite completed and invites the viewer to engage in sculptures and prints that explore her encounters with the ‘unmappable’.

Sculptor Isabel Mertz was awarded the Gerard Sekoto award for most promising artist in 2011 and also received a merit prize at the Absa L'Atelier Art competition. She has participated in numerous group shows in South Africa and recently exhibited in England and Paris.

The Problem of Crossing a Bridge runs from:

Isabel Mertz’s exhibition is presented by Absa, together with the French Institute of South Africa in collaboration with SANAVA, the Embassy of France in South Africa and the French cultural network of Alliances Françaises in Southern Africa.

A Celebration of Sekoto: The Life & Song of Gerard Sekoto
Gerard Sekoto
13 May - 01 June 2014
Mezzanine Gallery

In partnership with the Gerard Sekoto Foundation, Cedric Nunn, the Tatham Art Gallery, Concerts SA and The Headroom, the KZNSA invites you to join us in celebrating the extraordinary life, art and music of Gerard Sekoto (1913 – 1993).

Widely recognized as the pioneer of modern black South African art, we pay tribute to his life and song with an illuminating multimedia display in the Mezzanine Gallery and we mark his legacy in our Main Gallery with a solo exhibition by Isabel Mertz, the 2011 winner of the Gerard Sekoto Award.

For the opening event on Tuesday 13th May, Concerts SA have put together an African Jazz ensemble featuring Dalisu Ndlanzi on double bass, Dr Sazi Dlamini on guitar, Paki Peloeole on drums, and Sthembiso Ntuli on turner sax. Sharing the stage with this notable quartet will be acclaimed local poet Menzi Maseko as we embark upon an evening spent rejoicing in the rich heritage of Sekota’s music, art and poetry.

Exhibition opening: Tuesday 13 May at 6pm