The 19th International Art Fair will be present the Greek and foreign art galleries which show a picture of contemporary art trends. The parallel programme is rich of events forming a dynamic picture of the visual scene. 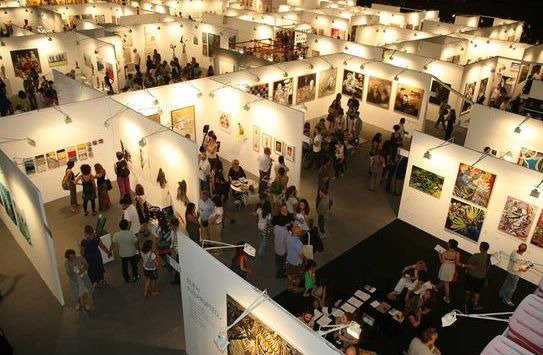 The 19th Art-Athina – International Contemporary Art Fair will be dynamically present at the Taekwondo Stadium in Paleo Faliro from May 15 to May 18. As always, the tone is set by the Greek and foreign art galleries which present a picture of contemporary art trends combined with the current flavour of the art market.
Additionally, cultural foundations, museums, art publishers and media contribute to a comprehensive picture of the artistic landscape of our time.

The parallel programme of Art Athina 2014 is rich and varied, with a host of events and actions forming a dynamic picture of the contemporary visual scene.
Specifically:

Presentation of the Daskalopoulos Collection
The Dimitris Daskalopoulos Collection, one of the most respected collections of contemporary art in the world, will honour Art Athina for the first time with its presence on this year’s Parallel Programme. The collection comprises over 500 works signed by 170
major artists of post-war and contemporary art from the international and the Greek art
scene. The collection will be represented by the audiovisual installation “Supersubjektiv” (2001) of Swiss artist Pipilotti Rist. The artist was born as Charlotte Rist in 1962 in Rheintal, a town near the Austrian border. She studied at the University of Applied Arts in Vienna and then at the School of Design in Basel. Her work —visceral, earthy and full of life— comprises sculptural, sound and video installations. A preoccupation with the human, specifically the female, body accounts for much of her art.

Presentation of the NEON Cultural Organisation
NEON, is a non-profit organization, which works to bring contemporary culture in Greece closer to everyone. It is committed to broadening the appreciation, understanding, and creation of contemporary art in Greece in the firm belief that this is a key tool for growth and development.
NEON, founded by Dimitris Daskalopoulos, breaks with the convention that limits the contemporary art foundation of a collector and enthusiast to a single place. It is a vibrant and engaging interlocutor with civic and cultural stakeholders and the wider public. It acts on a multitude of initiatives, spaces, civic and social contexts. It seeks to expose the ability contemporary art has to stimulate, inspire and affect the individual and society at large. NEON realizes its mission through free exhibitions, educational programs, grants and scholarships, talks and events and a creation of a network of international partnerships. NEON constructively collaborates with cultural institutions and supports the program of public and private institutions to enhance increased access and inventive interaction with contemporary art.

It is presenting the exhibition ‘A Thousand Doors’ at the Gennadius Library in collaboration with the Whitechapel Gallery, 4 May – 30 June 2014 NEON and the Whitechapel Gallery are collaborating to present an exhibition of works by Greek and international artists at the Gennadius Library curated by Iwona Blazwick OBE, the Director of the Whitechapel Gallery. The exhibition will be installed throughout the venue, both inside the library spaces and outside them in its formal gardens. The selected works
are executed in a wide range of media, and include video, sound and sculpture installations.
Participating artists include Edward Allington, Matthew Barney, Christian Boltanski, Pavel Büchler, Michael Dean, Nina Fischer and Maroan El Sani, Ceal Floyer, Isa Genzken, Shuruq Harb, Nigel Henderson, Georg Herold, Susan Hiller, Hannah Höch,
John Latham, Mark Manders, Juan Muñoz, Giuseppe Penone, Elizabeth Price, Michael Rakowitz, Annie Ratti, Meriç Algün Ringborg, Daniel Silver, Francis Upritchard, Adrián Villar Rojas, Jane and Louis Wilson. New works have also been commissioned from the Greek artists Jannis Kounellis, Nikos Navridis, Paky Vlassopoulou, Kostas Ioannidis
and Valentina Karga.
The exhibition will be accompanied by a series of programmes (free guided tours, open discussions, and educational programmes) created by Greek and international curators who have participated in the Curatorial Exchange Programme organized by NEON and the Whitechapel Gallery since 2012.

Art-Athina Contemporaries: Statement made
Curator: Artemis Potamianou
The action/exhibition “Statement made” of “Art Athina Contemporaries” attempts to document the contemporary art scene in the present tense. The artists in the exhibition come mainly from the galleries that participate in the main programme of Art Athina. "Statement Made" attempts to present more than a snapshot of the art currently produced in Greece as well as abroad; it aspires to establish and promote a discourse among the works, the artists and their practices and showcase the preoccupations of the artists and the variety of media they employ.

Platforms Project @ Art-Athina 2014
Curator: Artemis Potamianou
Young artists full of enthusiasm from many parts of the world will come together at this year’s “Platform Project @ Art-Athina 2014”. Platforms have attained their own distinct place on the international art scene without clashing with the environment they are called upon to serve. Last year’s successful event comprised 500 artists from 44 platforms in 16 countries! In this year’s “Platform Project” the platforms are 47 and come from 18 countries (Argentina, Austria, Belgium, Canada, Cyprus, Germany, Greece, Italy, Latvia, Netherlands, Romania, Russia, Sweden, Switzerland, Turkey, UK, USA, Finland), while the artists involved in the project will exceed by far last year’s already impressive figure.
The “Platform Project @ Art-Athina 2014” aims to map the artistic actions generated through collective initiatives, with artists who decide to join forces in looking for answers to artistic issues by working together with the ‘shell’ provided by a platform. The platforms/artists’ groups have the opportunity to present some project in specially provided booths and thus present aspects of the independent art scene and the way the operate and create channels of communication with other countries for joint actions. Platform Project @ Art-Athina 2014 will have special tributes to the platforms of the Balkans and Canada, which will be complemented by a series of lectures about art in those regions and the problems they encounter.

Collecting the images of the sensible: Contemporary art works from Turkey’s
collectors
Curators: Beral Mandra, Saliha Yavuz
Art-Athina opens it gates to the contemporary art production in the Balkans, South Caucasus, the Middle East and the South Mediterranean. The distinguished Turkish curator Beral Madra, soul of the successful Istanbul Biennale, and Saliha Yavuz, director of the “GriZine” portal that specialises in contemporary art, have joined forces to curate the exhibition “Collecting the images of the sensible: contemporary art works from Turkey’s collectors”, which brings into Art-Athina works of contemporary art
acquired by major Turkish collectors. The works in the exhibition come from the following collections: Fazlı Özcan, Parko Art Collection (Öner Kocabeyoğlu). Tansa Mermerci Collection, Elgiz Collection, Fusun & Faruk Eczacibasi Collection, Mustafa Taviloglu Collection, Ahmet Merey Collection and Olgaç Artam Collection. As the curators point out in their note, the exhibition aims to present not just a picture of art collecting in Turkey nut also the interface between two different viewpoints: the artist’s and the collector’s. They add: “even if we consider that the gaze of the artist determines that of the collector, [...] the concurrence of perception, reflection and discrimination is still notable”. As to what it is that connects artists and collectors, it is in fact the fascination, the temptation and the multifaceted content of the “image of the sensible”. The show focuses on the “identity and image of women” as interpreted in the artworks of two generations since the
1990’s.

Tribute to ZYGOS Gallery
Curator: Manos Stefanidis, Asst. Professor, University of Athens
The event “Tradition and Avant-garde: The ZYGOS Gallery” is dedicated to an important venue for Greek art history, the Zygos Gallery and the invaluable art magazine of the same name. In the event, which will be held on Sunday, May 18, professor Manos Stefanidis will describe the role of the magazine’s and the gallery’s founder Frantzis Frantzeskakis (1926- 2010). In 1955 Frantzeskakis as a young journalist and avid art lover launched Zygos, the influential art magazine which he ran with his wife Aikaterini for 28 years until 1983. Featuring articles on art history, architecture, folklore and aesthetics, the magazine served as a bridge between Greek and international contemporary art. One year later, in 1956, the “Zygos” Gallery opens at a central spot in Athens (Voukourestiou & Panepistimiou St.). It was the first professional art gallery in post-war Greece, operated for half a century and collaborated with the top artists of the time—among others, Spyropoulos, Tsarouchis, Asteriadis, Gaitis, Ghika, Caniaris, Mytaras, Karas, Fassianos, Karavouzis, Papayannis. As part of the tribute, three street artists (Idol 16-Yannis Kallidis, Nackle-Yorgos Tsiaglanis,
Skon-Vassilis Skondras) will present a parallel visual happening.

TALKS @ Art-Athina
Internationally renowned art theoreticians, curators and artists will give lectures as part of the 19th Art-Athina. The full schedule will be announced shortly. KIDS’ LAB – Children’s programme
Curator: Harriet Mitrakou-Gyparaki
Paying special attention to its educational aspect, Art-Athina gives once again to young visitors the opportunity to discover new skills and ways of expression and activate their visual perception in a specially designed interactive facility on the premises.
Art-Athina Party Art Athina, in collaboration with the famous and historical GURU Bar, has organised a party for Saturday, May 17. Set against the Flisvos Marina as a backdrop, it will feature some surprise drinks and dishes and above all the musical programme of Constantinos Zouganelis.
Since its inception, Art-Athina has had moral and material support from the Ministry of Culture.
The Athenian art-fair, one of Europe’s oldest, continues on its course, remaining true to its history and setting new, ambitious and topical targets. Art-Athina, the country’s most prominent annual artistic event, aspires to consolidate its role as a major regional European exhibition and establish itself as a historical yet modern event of the highest level.