An abstract painter with roots in minimalist drawing. Blending line, texture and contrast to compose spatially complex and visually hypnotic work are the hallmarks of the artist. 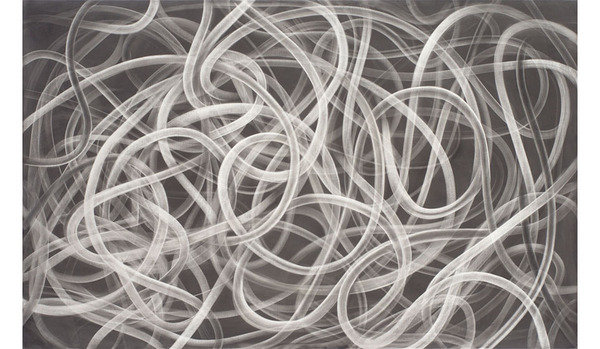 An abstract painter with roots in minimalist drawing, Mark Sheinkman's twenty-year-plus career depicts a core fascination with the essentials: line and space. The grit of his works on paper from the 1990s - dense, mechanical grids and striations; the horizontals and verticals seemingly pressing and smearing against one another - eventually gave way to a more lyrical approach: still the same layering, depth and sculptural technique but now with an added levity; the gestural swirls capturing light in a way reminiscent of even earlier experimentations with flashlight drawings on photosensitive linen. Sheinkman's work is purely abstract, the titles arbitrary or archival, referring to the date or street names of the city where the piece was produced. The process is consistent: oil mixed with alkyd applied on linen to create a smooth, white surface onto which powdered graphite is added with brushes and rags. Sheinkman then instinctively carves into the black with an eraser, exposing the white underneath. The action repeats; more graphite is deposited over the erasures, developing movement and history within the confines of a flat space. This is one of Sheinkman's hallmarks: blending line, texture and contrast to compose spatially complex and visually hypnotic work. Sheinkman continues to draw upon the lexicon established by the New York School with his latest body of work; recalling the mark-makings of Cy Twombly and the action of Jackson Pollock; all generated with the simplest of materials, following that creativity thrives in the company of restriction.