Cinema Zenit. The Italian artist is one of the most interesting comic book artists on the international scene. This project is set in a dream-like world, non-stop projection of short films in some abandoned cinema, with mysterious apparitions. 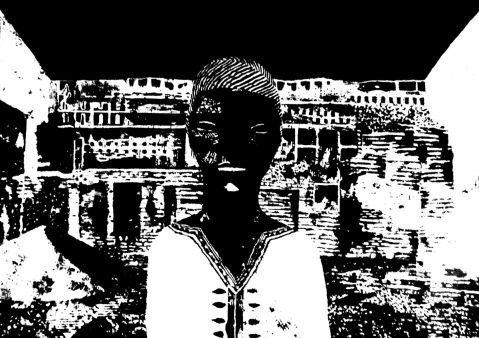 The Centre d’Art Contemporain Genève presents its first exhibition dedicated to contemporary comics with Cinema Zenit by Italian artist Andrea Bruno. Andrea Bruno is one of the most interesting comic book artists on the international scene. Among his influences are the great masters of the Italian and Argentinian schools, including Alberto Breccia, José Munoz, Sergio Toppi, and Hugo Pratt.

Andrea Bruno is interested in stories in which the unsaid, the characters’ alienation and dream-like settings are constant features. Over the past twenty years the artist has created an increasingly personal style, abandoning line and pen in favour of black blotches of ink, and the use of a brush and pieces of corrugated cardboard used as dabbers. This technique allows an impressionist-expressionist effect: the figures, bodies and faces created by the sharp contrast of deep blacks and pure whites emerge like mirages from the paper. The overall effect of the images and plates sequences is that of a powerful vision not dissimilar to the fantastical worlds conveyed by some of Tarkovsky’s and Béla Tarr’s films. Andrea Bellini, the director of the Centre d’Art Contemporain Genève, point to the way “Bruno creates his special inking in multiple layers, with constant accumulations and subtractions. Entire areas of the plates may be entirely abstract, like black-and-white coral reefs from which astonished contemporary heroes emerge, as though etched into pitch. And yet Bruno is not, and does not wish to be, a painter: the process of creating the image, the grammar of the narrative and the visual sign itself all come from reflections and research that come entirely from the practice and language of comic-strip art.”

Cinema Zenit is set in a dream-like world, almost as though it were a random, non-stop projection of short films in some abandoned cinema, with implausible characters and mysterious apparitions. It recounts the story of a young foreign woman staying in a lively but degraded and obscure city gripped by a tension between its proud inhabitants and intimidating occupying forces. Amid unexpected encounters and curious incidents, the reader follows the protagonist as she draws nearer to the forbidden heart of the old city and its disturbing atmosphere. The work is an attempt to explore the potential offered by a fragmentary narrative of huge visual impact. The story is conveyed by a consolidation of black and white which is seen as a non-negotiable precondition for expression by the artist.

Cinema Zenit is a project that will be presented at the Centre d’Art Contemporain Genève in its Project Space through both three large-format publications and three exhibitions following the story’s unfolding. Together with the original artworks for Cinema Zenit, the exhibition will include the artist’s latest plates and drawings, from Sabato tregua (Canicola, 2011) to large-format drawings for Biblioteca onirica (Alessandro Berardinelli Editore, 2013).

Andrea Bruno (Catania, 1972) is an Italian comic-book artist. His works have been published in many international magazines and anthologies. His recent books are Brodo di niente (Canicola, 2007), Sabato tregua (Canicola, 2011) and Come le strisce che lasciano gli aerei (Coconino, 2012, with texts by Vasco Brondi), also published by Rackham Editions in France, and the fanfold Biblioteca onirica silkscreen series (Alexander Berardinelli Editore, 2013). He has received numerous awards and has had solo exhibitions in Bologna, Agrigento, Perugia, Lucern, Stockholm, St Petersburg, Buenos Aires and Paris. He lives and works in Bologna. .
www.blackindianink.com

Canicola Associazione Culturale was set up in Bologna in 2004. Through a publishing research project, exhibitions, workshops, and attendance at festivals, it focuses on contemporary comics and drawings. Its production concentrates on a project-based magazine and books by Italian authors, as well as the translation of works by authors previously unpublished in Italy. Canicola is part of a cultural network of similar international organisations and has received several awards and national and international honours.

Opening at 5 p.m. on Saturday 17 May 2014 on the occasion of Geneva’s Museum Night, an event organized by the City of Geneva.