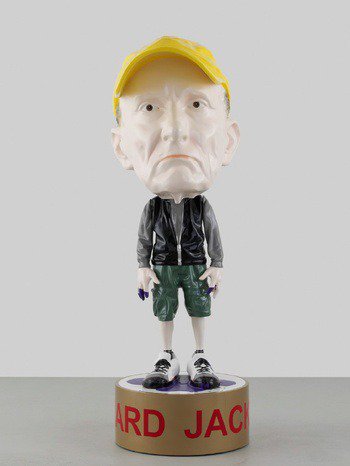 Hauser & Wirth is pleased to present an exhibition of major new works by Richard Jackson, including the latest in his series of large-scale mechanical installations.

Los Angeles based Jackson has been a pre-eminent figure in American contemporary art since the 1970s, counting Edward Kienholz and Bruce Nauman among his contemporaries. Influenced by both Abstract Expressionism and action painting, Jackson explores a performative painting process which seeks to extend the potential of painting by upending its technical conventions. For Jackson, paint is not a tool used to create a representational image, but is used as a ubiquitous liquid which is spurted, splattered and sprayed over the surface of his installations.

Jackson responds to the high-mindedness of painterly practice by repositioning painting as an everyday experience. He draws on domestic environments and basic human activities, such as defecation and sexual behaviour, to create the foundation of his installations. His approach to artistic practice is democratic as he combines it with references from lowbrow American culture, including motifs from hunting and baseball.

In a characteristic display of crudeness, ‘Pain-t’ (2012) depicts a line-up of boys with their pants pulled down, coated in paint which has been fired from their orifices. During the seminal action, paint was ingested through the figures’ mouths and followed the entire digestive tract before forcefully spurting from their behinds. In a similarly degrading image, ‘Copy Room’ (2014) entails a sex doll positioned on top of a photocopier, legs spread and recalling a scene from debauched office parties as the machine churns out endless replicas of her bodily imprint.

‘Shower Room’ (2013) is a contained environment with a black and white, tiled interior, which is reminiscent of a horror movie or a locker room, in a re-location of quintessential scenes from American culture. In a playful nod to the conventions of painting, the empty room recalls a blank canvas. The resulting kaleidoscopic showering of paint disrupts the clean, stark environment in an exuberant array of colour and disorder.

Jackson’s work often employs the image of the clown. In this exhibition, a grotesque kinetic sculpture with breasts for eyes and a paintball gun installed in its mechanised penis spins as it ejaculates libidinal paint into the surrounding space. A parallel pre-occupation for Jackson is the myth of the artistic genius, which he approaches with wit and humour. In ‘Bobble Head’ (2013), Jackson plays on the idea of the artist as a contemporary figure in pop culture. He sends himself up by creating multi-coloured editions of a self-portrait clad in his signature baseball cap, with an oversized head, based on the bobble-head figure of a baseball player.

Jackson’s work is process-oriented and the structural aspect of his installations involves a high level of craftsmanship and engineering. However, the final application of paint is generated through an automated process which Jackson calls ‘activation’. He equips his ‘painting machines’ with a network of pipes and hoses which, when deployed, cause violent eruptions of paint that immerse the work and surrounding area. The finished installations remain in the aftermath of this extreme and unpredictable performative action.

Richard Jackson was born in Sacramento, California in 1939. He first came to international attention with a major presentation of his installation works at the Menil Collection, Houston, in 1988, followed by the 1992 exhibition, ‘Helter Skelter’ at the Los Angeles Museum of Contemporary Art. Since then, his work has featured in numerous group exhibitions including the 48th Venice Biennale (1999) and the fourth Lyon Biennale of Contemporary Art (1997), as well as ‘Iconoclash’ (2002) at ZKM, Karlsruhe.

In 2014, Jackson’s work will be included in the group exhibition ‘Collection on Display’ at the Migros Museum für Gegenwartskunst, Zurich, Switzerland. His next major solo project is ‘Richard Jackson – CAR WASH’ held at the CAB Art Center, Brussels, Belgium, opening in September 2014.

Hauser & Wirth is delighted to unveil previously unseen drawings from Phyllida Barlow’s archive, dating from her time at Chelsea School of Art in the 1960s to the present day. Now 70, most of Barlow’s sculptures from the past five decades have been destroyed, leaving the drawing archive as the only surviving record of her earlier sculptural practice. Barlow’s drawings chart major international art historical influences as she experiments with new ideas and processes, showing influences from Arte Povera, Pop Art and New British Sculpture amongst others.

Best-known for her colossal sculptural projects, drawing is an integral part of Barlow’s practice; she draws before, during and after creating sculptures, both as a means of developing a working process and to visualise ideas which are later translated into three dimensions. Drawing provides Barlow with the freedom to improvise and engage directly with materials. The resulting works are fluid and incredibly dynamic. She works across media, using pencil, pastel, charcoal, acrylic and watercolour, always with the intense physicality evident in her sculptural work. Cross-hatching, scribbling or covering expanses of paper in washes of flat colour, her mark-making is at once deliberate and spontaneous. Consistent with her sculpture, Barlow’s drawings make bold use of vibrant colour as a means of expression.

Early interiors from the 1960s are vaguely Cubist in sensibility, as doorways and corner walls are stacked on top of each other in a flat frontal view, and table-tops, ceramics and picture frames form abstract geometric shapes which further disrupt the room’s composition. These early works are heavily stylised and objects are rendered in flat blocks of colour. Barlow uses broad architectural themes as a framework for unravelling space; doorways suggest vortexes between interior and exterior spaces as she brings the outside in and takes the inside out. Rather than on the objects themselves Barlow focuses on in-between spaces and the void.

Her drawings from the 1970s are characterised by a move towards abstraction as Barlow depicts in pencil lozenges, arcs and lumps of varying bulk. The original subject matter, only just identifiable through her reinterpretation of the world, is still grounded in interiors and landscape. In the 1980s Barlow employs heavy compressed charcoal to mark out freestanding pyramids, interlocking walls and maze-like structures. She makes liberal use of swathes of black, resulting in atmospheric industrial structures. Elsewhere she uses charcoal in a highly graphic way to create cartographical and labyrinthian sketches from her imagination.

Drawings from the last two decades depict a multitude of forms that reoccur throughout her sculptural practice – fences, awnings, barrels, staircases, cable winders, tower structures and lumpen masses of accumulated materials. In her more recent drawings the entire surface of the paper is a coloured ground, emphasising the encounter between an object and its surroundings.

Barlow’s sculptural practice is grounded in an anti-monumental tradition and is often concerned with the relationship between objects and the space that surrounds them. This sculptural understanding of the world permeates her drawings which exhibit a ‘breaking-down’ of space. Freed from the confines of reality, paper becomes a space for adventure as Barlow creates unlikely compositions within her drawings which disregard the laws of physics; imagined structures balance precariously or are suspended in mid-air. Barlow’s drawings are fascinating in themselves and also reveal the thoughts and processes behind her development as one of Britain’s preeminent sculptors.

The exhibition is accompanied by the publication ‘Phyllida Barlow: Fifty Years of Drawings’, containing an interview with Hans Ulrich Obrist, published by Hauser & Wirth in association with JRP|Ringier, 2014.

Phyllida Barlow was born in 1944 in Newcastle upon Tyne, England. She lives and works in London. In the late 1960s, Barlow began teaching at the Slade School of Fine Art as Professor of Fine Art. In 2009, she retired from teaching in order to focus on her own work. In 2011 Barlow was selected a Royal Academician.