Regulado. In February 2014, in Birbam, Filipa Cesar has been documenting, together with the filmmaker Suleimane Biai, the construction of a house that will serve the surrounding villages as a meeting space. The installation results from a confrontation, which occurred in the course of shooting in Birbam and by which the cinematic action was called upon in unforeseen ways. 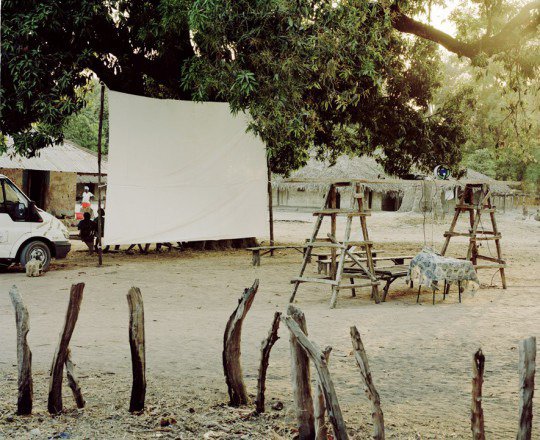 Filipa César, in her films and installations, explores the post-colonial constellations that were spawned by the recent history of Portugal. Since 2011, her research is focused on the film production in Guinea-Bissau, the beginnings of which were closely linked to the struggle for liberation. In February 2014, in Birbam, about three hours north of the capital Bissau, for the period of three weeks she has been documenting, together with the filmmaker Suleimane Biai, the construction of a house that will serve the surrounding villages as a meeting space. Alongside his work as a filmmaker, Suleimane Biai is the régulo in this region and hence has assumed the duties of the head and conciliator of the community. Regulado, an installation conceived for Neuer Berliner Kunstverein in cooperation with Arsenal - Institute for Film and Video Art, is named after the régulo’s scope of responsibility, usually an association of several villages. The installation results from a confrontation, which occurred in the course of shooting in Birbam and by which the cinematic action was called upon in unforeseen ways. Centered around two related videos, each of them shot in one take, the installation sketches relationships between various discursive and physical spaces, which intertwine within this encounter: the régulo’s scope of responsibilities and the staging space in front of the film camera, but also the assembly hall built off-scene, a mobile cinema in Birbam and the showroom in Berlin.

Suleimane Biai (b. 1968 in Farim, Guinea- Bissau) works as a director, producer and screenwriter at the Instituto Nacional do Cinema e Audiovisual in Bissau and since 2010, also as the régulo for the villages around his native town Farim. He studied film directing at the Escuela Internacional de Cine y Televisión in Cuba and alongside the realization of his own films and documentaries (including Djitu ten ku ten, 1997) worked as an assistant to Flora Gomes (including Pó di Sangui, 1995) and to Sana na N’Hada (Xime, 1993).

The works of Filipa César (b. 1975 in Porto, living in Berlin) are consistently shown in solo and group exhibitions, biennials and festivals, including most recently: Kunstmuseum St. Gallen (2013); Jeu de Paume, Paris (2012); Haus der Kulturen der Welt, Berlin (2011); Manifesta 8, Cartagena (2010); 29th São Paulo Biennial (2010); 63rd Berlinale (2013); International Filmfestival Rotterdam (2013, 2010); Mudam Luxembourg (2012). Under the title Luta ca caba inda she has recently produced a number of works and presentation formats that deal with the lot of re-emerged film footage from the 1970s in the National Film Institute INCA in Bissau.

After Cuba (2012), Regulado (2014) is Filipa César’s second collaboration with Suleimane Biai. The exhibition is part of the project Visionary Archive located at Arsenal - Institute for Film and Video Art. As part of this research project on African film archives, both filmmakers, together with Sana na N’Hada, organize a mobile laboratory on the film history of Guinea-Bissau under the title Von Boé nach Berlin (From Boé to Berlin). The central module of this project is a mobile cinema throughout Guinea-Bissau, where the recently re-emerged archive material shall be brought up to date, among other things, in the places of their origin.

Public Program
Sunday, May 25, 2014, 3 pm
Visionary Archive – It all depends #3:
From Boé to Berlin - A mobile laboratory on the film history of Guinea-Bissau
Presentation, film screening and artist talk with Suleimane Biai and Filipa César
Venue: Arsenal Cinema, www.arsenal-berlin.de