FBI Files, an exhibition of more than 50 collages and paintings by contemporary American artist Arnold Mesches (b. 1923). Mesches created these works after gaining access to 760 pages of files compiled by the Federal Bureau of Investigation (FBI) reporting on his public activism, professional work, and private life between 1945 and 1972. 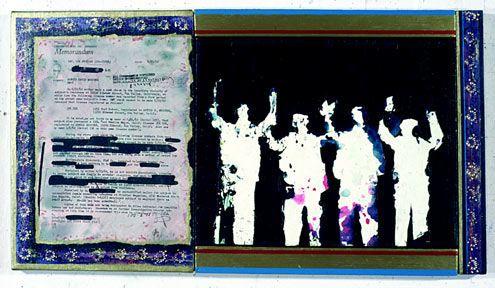 The acclaimed P.S.1/MOMA exhibition in its only West Coast showing

Los Angeles - Arnold Mesches: FBI Files, an exhibition of more than 50 collages and paintings by contemporary American artist Arnold Mesches (b. 1923), will be on view at the Skirball Cultural Center from January 30 through March 28, 2004. Mesches created these works after gaining access to 760 pages of files compiled by the Federal Bureau of Investigation (FBI) reporting on his public activism, professional work, and private life between 1945 and 1972. Through this intelligence, Mesches became aware of the hundreds of FBI officials and cooperating ordinary citizens--friends, colleagues, students, and acquaintances--who secretly monitored him for more than 25 years. Touching upon such themes as the right to privacy and freedom of expression, the mixed-media compositions portray three decades of American life and culture from the perspective of one artist.

Mesches, whose oeuvre is informed by world history and his experiences during the Depression, World War II, the Cold War, and the 'Red Scare' era, will give a talk on the exhibition on Thursday, January 29, 2004, at 7:30 p.m. at the Skirball. Related literary, film, and other programs are also scheduled.

The exhibition at the Skirball has been coordinated by Senior Curator of Fine Art, Barbara C. Gilbert. Organized and circulated by P.S.1 Contemporary Art Center, an affiliate of the Museum of Modern Art, Arnold Mesches: FBI Files was recently awarded the second-place prize for Best Show of an Underknown Artist by the Association International des Critiques dÂ¹Art (AICA). The exhibition has garnered national and international acclaim for its artistic excellence and originality and its relevance to current debates on governmental surveillance into the daily lives of American citizens.

Mesches requested and received the FBI files in his name in 1999, exercising rights granted by the Freedom of Information Act. Mesches was struck by the strong visual character and aesthetic beauty of the typed documents. Large portions of text were obscured, or redacted, with heavy ink. The crossed-out names and other classified data reminded the artist of the slashing black strokes in the paintings of the late Abstract Expressionist Franz Kline. In December of 2000, Mesches began the body of work that comprises the FBI Files.

For the series, Mesches integrated actual pages from the FBI files with news clippings, photographs from his personal archives, 1950s-era commercial art, magazine illustrations, and elements from his own paintings, drawings, and handwritten texts. Decorating many of the resulting collages with colorful painted borders suggestive of medieval books of hours, Mesches crafted them as 'contemporary illuminated manuscripts' depicting the social and political climate of his day.

Mesches juxtaposes government forms and memos with an assortment of icons of popular culture. These include an advertisement for Winston-brand cigarettes, a view of the Hollywood sign, a vintage film still of actor Robert Mitchum, and such images as a Ku Klux Klan member bearing an American flag, a movie theater audience wearing 3-D glasses, Sputnik, robots, motorcycle gangs, and Batman. Celebrities, politicians, and other notables of the day such as Malcolm X, Nikita Krushchev, Walter Cronkite, Richard Nixon, and Marilyn Monroe also figure in the work. A postcard that Mesches wrote to President Dwight D. Eisenhower on the topic of atomic weapons is embedded in one of the collages.

MeschesÂ¹ paintings are included in the collections of major museums worldwide and have been featured in 102 solo exhibitions. Born in the Bronx, the artist has strong ties to Los Angeles, where he lived for more than 40 years and where his works were first exhibited in the 1940s. He has taught at the University of Southern California, the University of California Los Angeles (UCLA), the Art Center of Design, and Otis College of Art and Design. After leaving southern California, in 1984, Mesches moved to New York. In 2002 he relocated to Gainesville, Florida. He was recently awarded a Krasner-Pollack Foundation Fellowship. At the age of 80, he continues to teach at several universities and art schools and to produce paintings, drawings, and collages.

Catalogue: The FBI Files by Arnold Mesches, featuring an essay by the artist and published by Hanging Loose Press (ISBN 1-931236-41-0, 64 pages, 55 color plates, paperback, $30.00), will be available at Audrey's Museum Store at the Skirball.

Related Programs: During the run of Arnold Mesches: FBI Files, the Skirball will present a wide range of exhibition-related programs.

Â· January 31: Censorship and Civil Liberties, a discussion on the personal, artistic, and political dimensions of domestic surveillance, featuring Arnold Mesches and a panel of experts--including author and former California legislator Tom Hayden and Ellen Geer, artistic director of the repertory theater company Theatricum Botanicum, which was opened in the 1950s for actors blacklisted during the McCarthy era. Moderated by award-winning radio commentator and producer Tony Kahn.

Â· February 7 and February 14: The Art of Social Protest: Mesches and Beyond, a two-part course on the art and politics of Mesches, presented by the SkirballÂ¹s Lifelong Learning department

Â· February 26: Lecture and book signing by Norma Barzman, author of The Red and the Blacklist, a memoir of her life as a Hollywood insider during the McCarthy era. Presented in association with Town Hall Los Angeles.

The exhibition at the Skirball is made possible in part by the Frederick R. Weisman Foundation.

About the Skirball
Skirball Cultural Center is dedicated to exploring the connections between four thousand years of Jewish heritage and the vitality of American democratic ideals. It welcomes and seeks to inspire people of every ethnic and cultural identity. Guided by our respective memories and experiences, together we aspire to build a society in which all of us can feel at home. Skirball Cultural Center achieves its mission through public programs that explore literary, visual, and performing arts from around the world; through the display and interpretation of its permanent collections and changing exhibitions; through scholarship in American Jewish history and related publications; and through outreach to the community.