'Foul play' by Joseph Gerard Sabatino combines crude industrial materials with elements of nature. For 'Fanfare for Crossing the Road', Ann-Marie LeQuesne asked musicians, who were dressed in uniforms and positioned beside the traffic lights, to mimic the digital acoustic crossing sounds that signal to the blind when to cross. 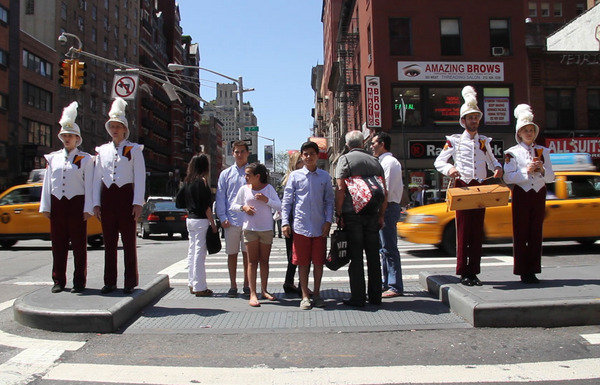 FOUL PLAY combines crude industrial materials with elements of nature. This new body of work is the third overlapping themed installation created within the last two and a half years. In his current exhibition, the artist continues to explore the life cycle of the silkworm, it’s attraction to the mulberry tree and how its phase of life and death forms a natural continuum. Even with the caterpillar’s brief lifespan, the larva feeds and quickly grows. It ultimately spins silk threads around its protective shell, later becoming unwound by an individual, then eventually woven into a luscious silk fabric.

BIO: 7_Lines-In-Black-In-Gray-I,-2014,-(detail)-61-x-48-inches,-black-charcoal-and-graphite-on-Sunray-printing-paper)_webJoseph Gerard Sabatino began his journey as a photographer, but soon expanded into different materials and methods. After receiving his education from Montclair State University and Lorenzo di Medici Institute in Florence, Italy, Sabatino went on to exhibit in a variety of New York and New Jersey venues. Solo exhibitions include the Paterson Museum and The Dryfoos Gallery at Kean University. He has exhibited in Northern Kentucky University’s Underground Railroad exhibition and participated in Bittersweet: The Chocolate Show at Rutgers University. Sabatino was also selected to participate in three consecutive New Jersey Arts Annuals. Internationally, Sabatino has featured work in Florence, Italy as well as in Graz, Austria. The artist was a recipient of Aljira’s Emerge Artist Fellowship Program and was one of ten artists selected nationally for the William and Dorothy Yeck Award for Miami University’s “National Young Sculptors Competition”. His work has been reviewed or featured in The New York Times, The Herald News, ArtVoices Magazine, The Star-Ledger, The Record and The Jersey City Reporter. This summer Sabatino will install a public work at The Gateway Center II Causeway. He has upcoming solo shows at Solo(s) Project House (Newark,NJ) and R. Jampol Project(s) (NYC) in the fall of 2014.

Ann-Marie LeQuesne stages performances with groups of people in public places. Her invitation to participate is an open one. The actions are simple, but are often disrupted or altered by their location. LeQuesne invites both the participation of her collaborators and the attention of those passing by. The action is then filmed or photographed, becoming material for a subsequent restaging from the documentation.

Fanfare for Crossing the Road is an international project that adds ceremony to a common event. Ann-Marie LeQuesne asked musicians, who were dressed in uniforms and positioned beside the traffic lights, to mimic the digital acoustic crossing sounds that signal to the blind when to cross.

The work began in the spring of 2011 in front of the Albert Memorial in London. It has since been performed in Helsinki, Lisbon, Cardiff and New York.

Ann-Marie LeQuesne will feature different videos at the AC Institute every two weeks through July 26, 2014.

BIO:
FanfareCardiff_webLeQuesne grew up in the United States, but has lived most of her life in the United Kingdom. She has a wide range of experience in collaborative performances, including events in the Tate Modern, the Tate Britain, a performance at the Arsenal Football Grounds, and a staged event on an icebreaker in the Arctic Circle.