The VII edition of the festival of new visual art film and performance features a performance on board a sea-going sailing barge; a large scale concert; psychedelia, multi-layered analogue sounds from vintage studio equipment and hypnotic vocal; a performance lecture; a sound installation for one person at a time and much more. 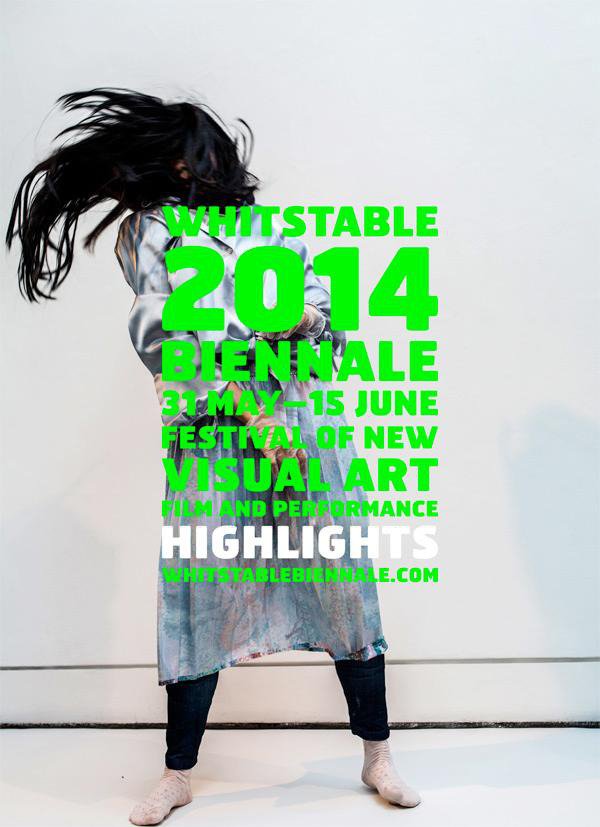 Selected highlights from the main programme:

The Sea Becomes a Stage
There will be a performance on board a sea-going sailing barge, performed at sea and entitled 'Vast as the Dark of Night and as the Light of Day' by artist Ben Judd. The work explores a blurred boundary between ritual and performance, employing the choreographic and the rhythmic as a method of constructing and examining communities, the performance will attempt to form a temporary, and fragile, community out of the participants on board ship.

Whitstable Biennale Special Event
Richard Wilson, sculptor, twice shortlisted for the Turner Prize and who recently installed Slipstream at Heathrow Airport teams up with artist duo Zatorski + Zatorski. Viewable from the town’s beaches, Whitstable Sounding, a large scale concert will take place at sea. It will be performed by a fleet of historic vessels that the artists have modified to become playable musical instruments, 51° 21’ 45′′ N, 1° 01’ 13′′ E Whitstable Sounding: Rockets and Blue lights (close at hand) to warn steam boats of shoal water begins in the last hour of light on Saturday 21st June, the longest day of the year. As daylight fades the ships will paint the seascape with steam, smoke and light, setting a Turner-esque stage that will reverberate with the sounds of ships ‘voices’. (NB This is a Whitstable Biennale Special Event taking place a week after the main Biennale dates on June 21st)

Das Hund & the Pilgrim Shells
A performance by Samuel Levack and Jennifer Lewandowski will feature their band Das Hund performing in the South Quay Boatshed. The huge warehouse will be infused with psychedelia, multi-layered analogue sounds from vintage studio equipment and hypnotic vocals, while the artists’ films will be projected onto totemic sculptural sets.

Choristers will walk a mile out to sea
Cathedral choristers in white robes will walk a mile out to sea at dusk, on a shingle shelf just above water-level, whilst performing a work about grief and loss by artist Louisa Fairclough who has teamed up with composer Richard Glover. As the choristers return to land the waves of the incoming tide behind them will engulf and cover the causeway they were walking on. Audience members will be invited to either watch from the shore or join the choristers on their poignant journey along the shingle causeway.

Art Angel Open winner
Since being commissioned by Whitstable Biennale 2014, Katrina Palmer, like Clio Barnard (Whitstable Biennale 2008) before her, has won the Art Angel Open. Whitstable has, it seems, become a route for accelerating the careers of the most exciting young contemporary artists in the UK.Katrina Palmer is creating a new audio installation which features the opening paragraph of an influential piece of twentieth century literature. The source text, in which a character moves between a state of wakefulness and dreaming, is half-forgotten and misremembered by the group discussing it.

A sense of place
Kieren Reed investigates the potential of art to transform society with a new social artwork for Whitstable Biennale 2014 entitled From the Ground up, (A) Social Building. The work creates a unique space for audiences to explore, and a point from which to pick up information about the whole festival.

Through his functional sculpture Reed is exploring the legitimacy of participatory practice and the possibilities of creating innovative learning environments within the act of building a public space.

Building 519
Rosa Ainley’s extensive research into the Pfizer pharmaceutical complex near the town of Sandwich, Kent UK leads to a new work of fiction entitled Building 519, and other Pfizer Tales. The work explores the echoes of the previous lives the Pfizer pharmaceutical complex, leading to a new incarnation of the site, (re)constructed from people’s memories and accounts, both real and imagined.

The Sorrowful and Immaculate Fall of One Hundred Grazing Sheep
The visitor will be taken alone to an undisclosed building where artist Bronwen Buckeridge presents a sound installation for one person at a time. Arriving at the location your journey is not yet complete as Buckeridge will use layered binaural soundscapes to transport you (the listener) to yet another place – a treacherous beach.

It all began with Richard Burton...
It all began with Richard Burton... is a performance lecture taking place on a bus. Artist S Mark Gubb leads a tour through the coastal towns of east Kent, revealing a peculiarly personal relationship with the place he grew up in. Setting off from Whitstable, the tour gradually makes its way through a landscape of strange connections and events, littered with hearsay, C-list celebrities and coincidences. It’s the kind of history that exists anywhere, but one that can only be gathered over a lifetime of being somewhere.

In 2008 when Bob and Roberta Smith, a judge on Whitstable Biennale’s Open Submission Award declared "Let art be the balm that heals society" it was taken as a rallying cry. That same year Clio Barnard exhibited ‘Plotlands’ a new commission for the festival. She subsequently won the Art Angel Open, was nominated for a BAFTA and went on to make ‘The Selfish Giant’ a feature film that has won or been nominated for just about every award going.

Sue Jones, Director, Whitstable Biennale says ‘We like to give artists their first big break’.

Artist, Katie Paterson said in 2010 “The Whitstable Biennale commission gave me the opportunity to experiment with a new model of working, and to create a large-scale andambitious series of new work (one of which included working with experts at the London
Centre of Nanotechnology, and journeying to the Sahara desert). All the Dead Stars extended my relationship with Astrophysics Dept UCL, which contributed towards my receiving a Leverhulme Award."

Launch of The 7th Whitstable Biennale 2014 on Saturday 31st of May on the main beach at 12:30pm where drinks will be served