From the Ethics of Acting to the Empire without Signs. The artist makes a new installation referencing the changing environment of his atelier as well as his unique collaboration with French theatre director Jean Michel Bruyere. 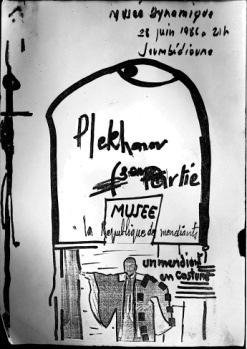 “Issa Samb is considered a total artist. His practice ranges from acting, for both theatre and cinema, to writing (poetry, essays, novels), installing, performing, painting and sculpting... yet his work is unclassifiable.” Curator Koyo Kouoh.

Iniva (Institute of International Visual Arts) is pleased to present the first UK solo exhibition of artist Issa Samb at Rivington Place this summer, curated by Koyo Kouoh, Artistic Director of Raw Material Company based in Dakar. Samb will make a new installation referencing the changing environment of his atelier as well as his unique collaboration with French theatre director Jean Michel Bruyère.

Born in Dakar in 1945, Samb founded the Laboratoire Agit’Art with a group including filmmaker Djibril Diop Mambety, painter El Hadj Sy, and playwright Youssoufa Dione in 1974. From its inception the Laboratoire was a revolutionary and subversive artist collective that brought together many creative disciplines from painting to performance.

Samb has developed a recognisable approach of provocation, collective action and improvisation that is rooted in modes of contemporary art and theatre, the role of the artist in the society, and the interactivity of traditional African performance. This comes together in sculptural form at the courtyard of his atelier in the Rue de Jules Ferry in Dakar, where found and transformed objects and materials including threads, fabrics, clothing, branches, stones and other ephemera are installed around a tree. A total artwork, this dynamic arrangement provides an entry point into the spirit of Issa Samb as an artist as well as the Laboratoire Agit’Art as a collective.

The gallery installation at Rivington Place will include materials and works shipped from Senegal as well as found elements collected in London’s street markets. Central to the exhibition will be fragments of the artist’s writings and footages and videos as well as short films from the oeuvre of French director Jean Michel Bruyère in which Samb plays the role of an actor at the service of Bruyère’s durational performance-installations. An archival display of material will also position Samb’s work in relation to his engagement with Laboratoire Agit’Art and to Senegalese art and politics.

This exhibition is part of Practice International, a project supported by the Culture Programme of the European Union.

Issa Samb was born in 1945 in Senegal and lives in Dakar. He studied art at Institut National des Arts and philosophy, law, and sociology at Université de Dakar in the late 1960s. In 1974 he founded, together with a group of artists, writers, film- makers, performance artists and musicians, the Laboratoire Agit’Art, whose aim was to transform the nature of artistic practice from a formalist, object-bound sensibility to practices based on experimentation and agitation, process rather than product, ephemerality rather than perma- nence. With a focus on the contingent character of actions, Laboratoire Agit’Art was informed by a critique of institutional power. He lives among his artworks in his courtyard-home-studio, which combines all sorts of objects: a permanent exhibition that varies on a daily basis. Samb has never seeked to be exhibited, preferring to show his works in his studio to escape the conformism of exhibition spaces. He nevertheless co-founded Galerie Tenq – Village des Arts. He is the author of numerous plays, poems and essays. A retro- spective of his work was held at the National Art Gallery, Dakar in 2010. His work has been included in exhibitions such as dOCUMENTA (13), Kassel, 2012, Biennale de l’Art Africain Contemporain, Dak’Art, Dakar, 2008 and ’Seven Stories of Modern Art in Africa’ , Whitechapel Gallery, London, 1995. Word!Word?Word! Issa Samb and the undecipherable form, his first solo exhibition in Europe was on view at OCA, Office of Contemporary Norway in 2013.

Jean Michel Bruyère is a French born artist, writer, director and graphic designer based in Marseille and Berlin. His theatre-performance based work is grounded in the tradition of improvisation and actionism. He is the director of numerous films, videos and plays. His most recent works include Return to Chicago – Tribute to Fred Hampton (2013), Le Progrès de l’Immobilisme (2013), Polyptych Bobby Seale (2012) and Le Préau d’Un Seul #12 (2012). He is a founding member of the artists collective LFKs based in Paris, Marseille and Berlin. Bruyère is a regular guest at Festival d’Avignon and his work was shown at the Logan Center, Chicago, ZKM, Zentrum für Kunst und Medientechnologie, Karlsruhe, 9th Shanghai Biennial among other venues. His animated sculpture-installation Le Chemin de Damastès (The Path of Damastes) is on view in the exhibition „Art Robotique“ curated by Richard Castelli at Epidemic in Sevran until January 2015.

Koyo Kouoh is an exhibition maker and cultural producer whose curatorial work revolves around the redefinition of the contemporary African persona. She is the founding artistic director of RAW Material Company, a center for art, knowledge and society in Dakar. She has served as curatorial advisor to documenta 12 in 2007 and to d(OCUMENTA) 13 in 2012. She has collaborated with the Dakar Biennale from 2000 to 2004 and co-curated the Les Rencontres de la Photographie Africaine in 2001 and 2003. Her most recent projects include Word!Word?Word! Issa Samb and the undecipherable form, OCA Office of Contemporary Art Norway and Raw Material Company, 2013, Chronicle of a Revolt: Photographs of a season of protest, Raw Material Company and Haus der Kulturen der Welt, Berlin, 2012, Condition Report on Building Art Institutions in Africa (Hatje Cantz Publishers, 2013), a collection of essays resulting from the eponymous symposium held in Dakar in January 2012, Kouoh is the curator of the education programme of 1:54 Contemporary African Art Fair whose inaugural edition took place in London in October 2013. She lives and works in Dakar and Basel.

Practice International is an initiative of CasCo (Utrecht), Iaspis (Stockholm), and Iniva (London). The project aims to reflect on our positions as artists, curators and institutions, to think how we can embody and meet new forms of practice involving agents of social change, introduce new terms into the discourse, and question institutional habits.

About Iniva
Iniva (Institute of International Visual Arts) works at the intersection of society and politics. It engages with new ideas and emerging debates in the contemporary visual arts, reflecting in particular the diversity of contemporary society. We work with artists, curators, creative producers, writers and the public to explore the vitality of visual culture. (www.iniva.org) Iniva is supported by Arts Council England.

About Rivington Place
Opened in 2007, Rivington Place is home to Iniva and Autograph ABP. Designed by architect David Adjaye OBE, this award winning building is dedicated to the display, debate and reflection of global diversity issues in the contemporary visual arts. Rivington Place is home not just to two exhibition spaces but also Iniva’s Learning Space and unique research library, the Stuart Hall Library.