Live art by 14 celebrated international artists. Each artist was invited to activate a room, exploring the relationship between space, time and physicality with an artwork whose 'material' is a human being. Alongside new works, historical pieces will be presented for the first time and other rarely seen works will be brought. 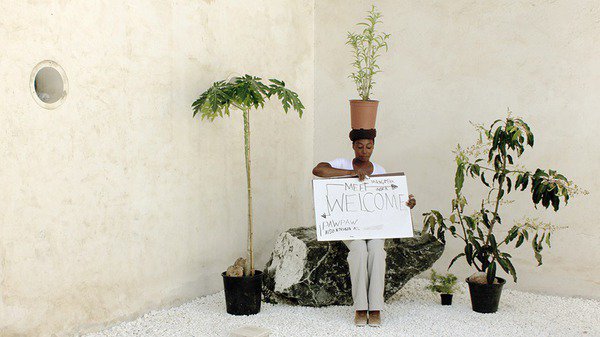 Curators Klaus Biesenbach, Director of MoMA PS1 and Chief Curator at Large at The Museum of Modern Art, and Hans Ulrich Obrist, Co-director of Exhibitions and Programmes and Director of International Projects at the Serpentine Gallery, have invited 14 international artists to each activate a room, exploring the relationship between space, time and physicality with an artwork whose 'material' is a human being. Giving visitors an insight into a more performative and interactive practice, visitors will encounter a new situation within each of the 14 rooms, engaging in a diverse series of immersive and intimate experiences.

Conceived specifically for Basel, Ed Atkins, Dominique Gonzalez-Foerster and Otobong Nkanga will create new works for the show. Alongside these world premieres, historical piece by artists such as Bruce Nauman and Yoko Ono will be presented for the first time at 14 Rooms and other rarely seen works by acclaimed artists from around the world will be brought to Basel.

‘14 Rooms’ will include Jennifer Allora and Guillermo Calzadilla’s 'Revolving Door' (2011), in which a group of d ancers spontaneously form a line and begin to rotate around the room in a circular motion, sweeping up visitors as they move around the space.

In his exploration of social boundaries and socio-cultural inequalities, Santiago Sierra places a succession of war veterans, from varied past conflicts, standing facing one corner of a 5-5-meter room and instructed to only move from their post once solemnly replaced by another veteran mimicking the changing of the guard.

Damien Hirst’s important early work 'Hans, Georg' (1992), consisting of a rotating cast of identical twins sitting below two of his own identical dot paintings, will be restaged at the show under a new title.

Marina Abramović’s 'Luminosity' (1997) places a performer on a bicycle seat fixed onto a wall bathed in bright light, exploring themes of loneliness and spiritual elevation.

Roman Ondák’s 'Swap' (2011) asks a performer to choose an object as they sit behind a table, and when visitors enter the room they are then able to swap the object with anything else they are willing to exchange, while in Chinese artist Xu Zhen’s 'In Just a Blink of an Eye' (2005) a body floats in mid-air as if frozen, defying both time and gravity, and making the audience question reality and reflect on the work's seeming impossibility.

Artists and the curators will be attending the opening of the exhibition.

While the artists themselves are not present in these works, they instruct performers on how to act out their specifications, resulting in over 70 performers – primarily from the Basel region–taking part in the exhibition. ‘14 Rooms’ will be staged in Hall 3 of Messe Basel in walking distance from Messeplatz. The exhibition will open to the public ahead of Art Basel on Saturday, June 14 and will stay open until Sun day, June 22.

Ann-Christin Rommen, Marc Bättig are the Producers of the exhibition and Samuel Leuenberger is the Associate Curator.

The exhibition will be accompanied by a book published by Hatje Cantz. The English/German edition will be available to purchase onsite as well as through bookshops.

Hall 3 of Messe Basel, walking distance from Messeplatz Basel
Public opening dates and hours:
The exhibition will open to the public ahead of Art Basel on Saturday, June 14 and will stay open until Sunday, June 22, 2014. Daily from 10am to 7pm, apart from Monday, June 16, 2014, from 10am to 5pm.
Day Ticket (return entry): CHF 18
Reduced Day Ticket for Students/Seniors: CHF 12
Groups of 10 people or more: CHF 15 per person
Combination Ticket Art Basel (available to purchase onsite only): CHF 55
Tickets are available from 14rooms.net