In 'Vernacular Alchemists', the artists offer a radical investigation of the way we look at ourselves and at the world in general, building an autonomous universe governed by its own laws and aesthetic codes. With 'Myriorama', Ceel Mogami de Haas & Vianney Fivel features a series of videos. Stefan Tulepo is interested by common areas, as architectural as social, through traces and evolutions left by time. 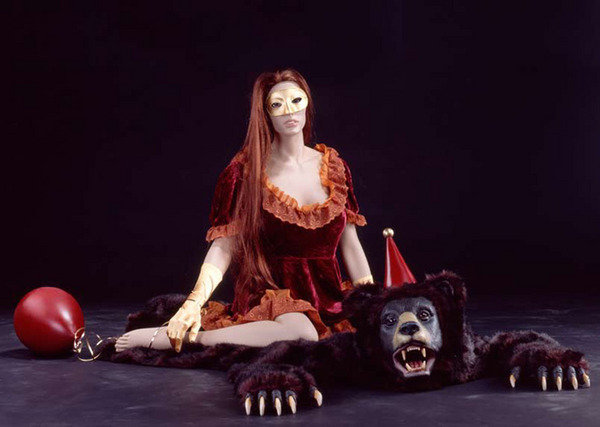 The title of the exhibition is a quote from an essay by John C. Welchman[1] written in 1999 about Mike Kelley’s works. He referred to the attraction of the recently disappeared artists to forms we call “popular” – or at least outside of the values system established in the art world –, to his ability to develop “narrative strategies” as absurd as erudite, and also to the vernacular appropriation. The Vernacular Alchemists here evoked can be placed in this lineage and will to “shut down traditional disciplines whose logic is based on authenticity and originality”[2], while seeking to reveal the hidden face of our society.

However, if they show a particular interest in popular culture, they have exceeded the dichotomy between high and low culture, as seen since the mid-80’s. They are thus fully aware that these forms of alternative or underground culture are now assimilated into contemporary society, from the mainstream industry to the most prestigious museums. While the advocates of High & Low, mainly part of the West Coast scene and some now legendary exhibitions, do not hesitate to confront heterogeneous ideas, concepts and references, calling a nonchalance and an “aesthetic of cool” one could consider as typically Californian, the artists presented here rather tend to adopt a critical stance vis-à-vis this brutalist/appropriationist approach, including freeing the counter-cultural logic of their post-punk peers. Their approach is closer from alchemy, an attempt of transformation, transmutation that goes beyond the “simple” manipulation of pre-existing elements.

Whether they revisit forms of vernacular culture, folk, pagan or paganistic traditions, call ancient or more contemporary rituals, study heterodox group practices or develop real mythologies, the elements and concepts these artists use and combine reach to transcend reality. Without talking about “occult” or “shamanism”, one can legitimately refer to the concept of cosmogony as a very personal new reading of the world evolution even a “marginal reality”. They offer a radical investigation of the way we look at ourselves and at the world in general, building an autonomous universe governed by its own laws and aesthetic codes. An approach that one could call “anthropological theater”, that echoes many rites and legends, from the American Spiritualist movement to St Nicholas through various singular parades. All those traditions ultimately express social truths: by inventing imaginary worlds, these individuals or communities hold true discourses about themselves, while representing belief systems enrolled in a fundamentally religious context.

A Myriorama is a set of picture cards, which is arranged and rearranged to create various images . The cards are painted to be juxtaposed in any order. The number of possible arrangements tends to infinity.

Ceel Mogami de Haas and Vianney Fivel named their project after the picture cards game to make a series of videos. the superimposed images from various sources generate a series of free associations and interpretations. Image overlay fits a specific form which recalls a cone, a sphere, a cylinder or a polyhedron and creates different speeds redistributinting constantly stories in a broader narrative framework.

The game cards are found or created for “the needs of the cause” (Christian Besson ) and come from very diverse fields of knowledge. To deal with this chaos, a montage is required to combine the cards in order to bring out not only images but also what happens in between them. “Sometimes I do not know where this dirty road is taking me ; sometimes I can not even see the reason why”. We could recognize Martin Heidegger in these verses of Townes Van Zandt, but also Robert Walser, Paul Celan, Aby Warburg, Gertrude Stein or Mad Max. Myriorama is a ” spontaneous method of irrational knowledge based on the critical and systematic objectification of delirious associations and interpretations”, the famous paranoiac-critical method by Dali.

As a montage enterprise, Myriorama combines readymade elements with artifacts, providing an interwoven understanding of common and personal as complementary agents.

Myriorama doesn’t lead to any conclusion, rather it has a perpetual movement of composition and decomposition of the collected material as the eponymous card game offers endless from one image combinations .

Stéfan Tulépo is interested by common areas, as architectural as social, through traces and evolutions left by time. These wanderings in Brest, surveyed during his three-month residency with his pickup truck, led him to see it as a layer cake in which structural work, decorative items and gestural oddities stratify. Here, a tree brushed the plaster of a facade with the wind of Brittany, there the walls of disused barracks betray a living space stopped in time…

Far from a simplistic fascination for urban melancholy even so present in this rebuilt city, Stéfan Tulépo uses the manner of an archaeologist-poet to recover and transcend the forms of banality that this playground is filled of. As a sculptor, resolutely committed to a voluntary plastic gesture, he seizes gleaned objects. With a scratch, a break, a spot, he extends a form by playing with the hazards that materials, time, colors, textures, dust, number of layers and used tools may offer.

From facing stones of an old hearth, he excavates the urban icons that are the electric poles and other candelabra, carves the recurring motifs of facades in a set of shutters or engages in a detailed engraving of a street of Brest to the surface of a home aquarium.