His creative process has become even more complex. The roles that things played in earlier works have now taken surprising new interpretive directions. There is a stronger sense of cross-referencing with reality, if one wishes to look for it. 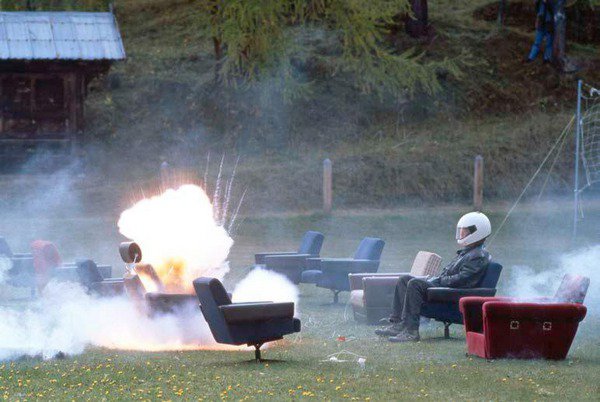 His “small and large happenings” as he calls them, have brought him international fame. Roman Signer, born in 1938 in Appenzell, Switzerland, has become one of the most important sculptors in the world. The starting point for his unique creative process is a concept of sculpture that is disengaged from the object, making processes visible. Everyday things form the basis of his work. The objects he uses, such as tables, chairs or kayaks have a distinct character of their own. However, Roman Signer does not use them for their typical functions; instead, he transforms them in a way that exposes the multiple potential layers of meaning in their presence as physical objects. Familiar things become strange; functional things appear absurd. Both the exhilarating and the abysmal qualities of everyday life become visible.

Roman Signer has accrued an impressive list of exhibitions both in Switzerland and internationally. After presenting his first retrospective in 1993 and numerous contributions to group exhibitions, the Kunstmuseum St.Gallen is once again presenting a comprehensive showcase of Signer’s work. The centrepiece of the exhibition is his installation work created since 2011. It will be exciting to see how the artist deals with the traditional museum spaces when he returns to them after twenty years. He knows these spaces like the back of his hand – in the early 1980s, when the museum was closed, he had the opportunity to set up a studio there.

Roman Signer’s creative process has become even more complex. The roles that things played in earlier works have now taken surprising new interpretive directions. There is a stronger sense of cross-referencing with reality, if one wishes to look for it. The content-based element of his work is significant to Roman Signer’s lucid contemporaneity, even in pieces that can clearly be read as existential ciphers. The exhibition combines sculptures, installations and video works into one concise flow and moves between large-scale single pieces and interrelated groups of works.