This loose confederation of about 15 artists, mostly from the south of France, made work marked by an interest in materiality, expansive ideas of what a painting could be and often a lyrical use of bright color. 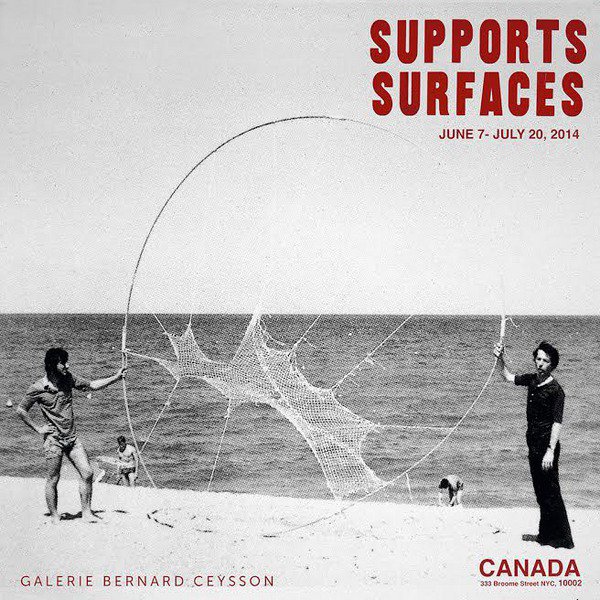 CANADA is pleased to present “Supports/Surfaces”, the first comprehensive exhibition in the United States of this under-recognized French art movement. Supports/Surfaces was a loose confederation of about 15 artists mostly from the south of France (Nimes, St. Etienne, Nice, Etc.) who made work marked by an interest in materiality, expansive ideas of what a painting could be and often a lyrical use of bright color. There is no manifesto, but the writings and ideas of Freud, Marx, Clement Greenberg, Michael Fried and Chairman Mao were tossed together along with a deep interest in Matisse, another artist associated with the south of France.

French society in the 1960’s was undergoing upheavals and social protests that mirrored the struggle for civil rights and anti-war movements in the USA. Many of the artists involved with Supports/Surfaces were veterans of the war in Algeria, and as young artists and citizens they were looking for alternatives to the colonial war machines that seemed to be the norm in western society. They made art without slick fabrication, organized on loose permeable grid structures; which implied a canvas and utilized repeating forms and/or patterning which seemed to offer a humane possibility for both art making, and a metaphorical proposal for just society.

Everyday items used as art materials were as radical then as they are commonplace now. Witness the dishrags of Dolla, the painted sunshade umbrellas of Viallat, the lathe constructions of Dezeuze or Saytour’s bolt of raw fabric in the seminal piece “Deployed”. Supports/Surfaces artists may or may not have been the first to pick up such materials, but what they did with them formally is the key to what sets the group apart from say Arte Povera in Italy or the more famous French group BMPT. In their hands there was a coupling of base material, the format of painting and the poetics of unprogrammatic form and color that simultaneously questioned and reaffirmed painting.

Art, particularly art that is quiet, politically unpopular, different, possible to ignore or misunderstand has little chance of living a life beyond the studios and conversations of a few. What propels a group of artists to come together in mutual support and debate? It could be a shared history, similar education, or mere expediency. The fact that the art on display at CANADA seems fresh today, still has currency in our world, is a testimony to the comradeship, friction and wild ambition of the Supports/Surfaces artists. While not an artist, for the past forty years Bernard Ceysson has been the primary advocate for the vision that Supports/ Surfaces posited. The uncanny harmonics of these important French artists and working artists in New York City at the present moment seems worth examining.

An English language book was co-published by Galerie Bernard Ceysson and CANADA on the occasion of this show. The book features many color plates and illuminating writing by Rachel Stella and Joe Fyfe. The book also sports a handsome cover of raw cardboard and a cloth spine in the bright green of the Football Club AS-St. Etienne, of France’s premier league, a soccer team well known for punching above its weight class.