Gouaches. Adapting certain aspects of his sculptures relating to their angularity and kineticism, the gouaches present a synthesis of these geometric forms with more earthly, representational subjects. 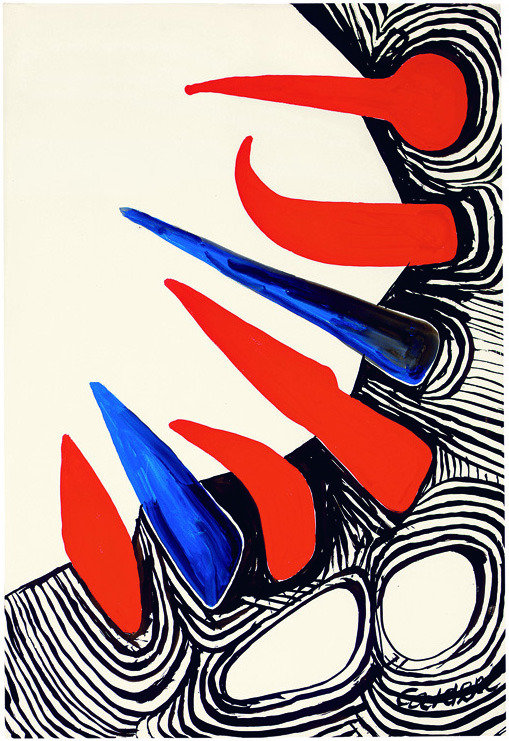 Gagosian London is pleased to present "Alexander Calder: Gouaches," the second installment of a two-venue exhibition in New York and London.

In the late 1920s, Calder's new method of sculpting--bending and twisting wire to "draw" three-dimensional figures in space--resonated with both early Conceptual and Constructivist art, as well as the language of early abstract painting. Seeking to capture the constant motion of life, he created kinetic sculptures in which flat, abstract shapes in light sheet metal, painted in a restricted palette of black, white, or bright primary colors, hang in perfect balance from wires. Marcel Duchamp was the first to describe the new works as "mobiles," while standing "stabiles" employed welding and bolting techniques to reject the weight and solidity of sculptural mass, to produce forms that were both linear and planar, open and suggestive of motion. By 1950, Calder had achieved international renown, affording him opportunities to engineer his sculpture on a monumental scale.

Parallel to his sculptural practice, and expanding upon early work in illustration, brush drawing, and painting, Calder created a series of paintings in gouache during a yearlong stay in Aix-en-Provence in 1953. He would continue to work in gouache throughout his life. Painting quickly, he transcribed the vocabulary of his sculpture into a medium far more immediate than the large-scale works in sheet metal produced simultaneously. Adapting certain aspects of his sculptures relating to their angularity and kineticism, the gouaches present a synthesis of these geometric forms with more earthly, representational subjects. The spiraling vortices of his early wire sculptures reappear atop pyramids (a recurring motif following a flight over Egypt), or hovering beside red suns (impressions of Guatemala's fiery sunrises). Boulders, solar systems, and cacti are points of departure for his exuberant line, which conveys arabesques, orbs, and layers of bold stripes. Delighting in nature and evoking the subconscious, Calder celebrated essential yet enigmatic forms in an array of ochres, yellows, and vermilion, a vivid palette reserved for a lifetime of spontaneous impressions.

For further information please contact the gallery at london@gagosian.com or at +44.207.493.3020. All images are subject to copyright. Gallery approval must be granted prior to reproduction.