Using multi coloured, scrawling, hand writing, his work exposes the British underbelly, the man on the street, the woman ignored, the angry, the mute and misunderstood. 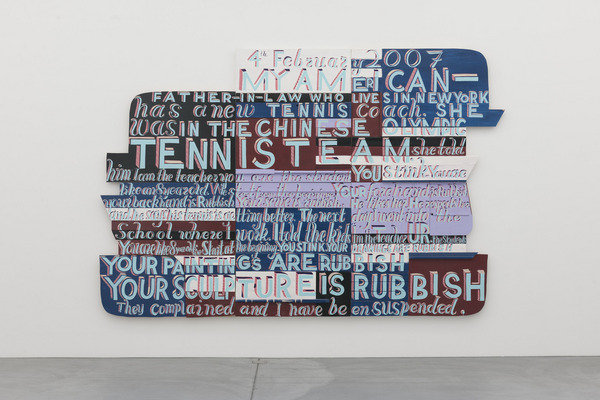 Von Bartha’s Garage is proud to present a new exhibition of the work of Bob and Roberta Smith. Critically composed of recent works previously unseen in Switzerland. Bob and Roberta Smith is an artist, activist and teacher that used to be, he and his sister, before she left being a communist and an artist, to train as a psychoanalyst. His work exposes the British underbelly, the man on the street, the woman ignored, the angry, the mute and misunderstood.
Like the child in the oppressive out of date education system, his work is politics, like a heat seeking flame in the playground. It includes a work, titled: I Said That’s A Disaster, Dairy Painting: paint on found timber from a skip (2007).

Using multi coloured, scrawling, hand writing, he gives a humorous, self-conscious account of his first museum show in the USA. The morning of the show, the curator calls to say the party, and maybe show, is cancelled. Not hearing the news of 9/11, he declares, ‘That’s a disaster!’ The sign ends ‘turn on the TV Bob’. Bob calls for a politics and culture informed by art, a consciousness recognizing we all have stories to tell and grim moments, an education system with creativity at it’s heart and a much needed feminist art movement. Personal and Political refers to Carol Hanisch's essay of 1970, recognizing that family, the work of love and care, sexuality, identity and subjectivity are shaped by political power.

In Bob’s work art and life are blurred, in Kaprow like Happenings, political campaigns, his band The Ken Ardley Playboys and his hand painted slogans and diary stories on found wood. His jokes and pokes at the Art World and British Politics allow a Life for the Mind. (Also the title of a show he curated of artists who, in Bob’s words, “stick a sharp pair of scissors into the soft underbelly of male hegemony”). He prays to inanimate objects like the record player and Louise Bourgoise and says Art is not easy. Easy art is not good art.