Still Water Runs Deep. 20 Danish and international artists / artist collectives have been invited to exhibit both in inner city Odense and its green spaces thereby creating a route through different times, moods and locations. The project wants to experiment by opening up a number of under-represented dimensions of the urban space. 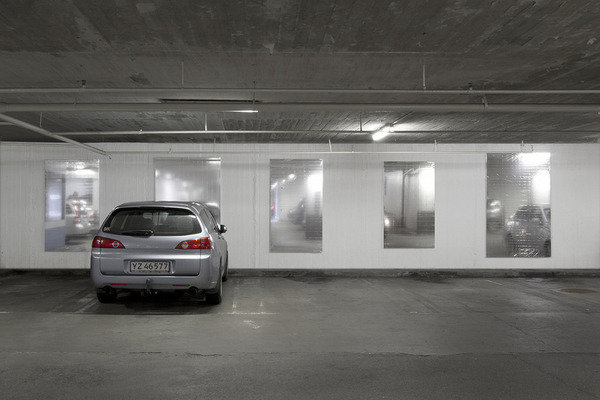 Contemporary art in the center of SCULPTURE ODENSE 14 has the tagline Still Water Runs Deep. Danish and international artists have been invited to exhibit both in inner city Odense and its green spaces thereby creating a route through different times, moods and locations.

One of the artists, British Simon Fujiwara, has made an artwork called Ghost inspired by the story of the Odin Tower.

Like a Funen Eiffel Tower with a height of 167 metres and an ultra modern steel construction, the tower was the proud landmark of Odense. In 1944 Danish Nazis blew up the tower as an act of revenge against the local resistance people and their sabotage against the occupying forces. Steel from the tower has been melted down into shoe taps which guests can put on when they walk around the city. Fujiwara has traced the journey of the steel from the piers of Little Belt Bridge to 30 tons of blown-up steel scrap which was broken up by HJ Hansen and sold as recycled metal to companies all over Denmark. The minimal art work reminds us of the terror and xenophobia of the past, and turns the exhibition route into a journey through time where history moves through the city like the quiet ghostly echo of the past.
Fujiwara´s artistic practice is placed somewhere between fiction and archeological excavations of the political and social structures which are deposited in our physical reality. Architecture has been the focus in many of his works for instance Incest Museum 2008 and Phallusies, 2010, which form architecture and structures based on hidden psychological layers, suppressed desires and pure invention. In Ghost the movement has been reversed – here monumental historical architecture becomes an intimate experience connected to the body of the visitor and the feelings connected to the drama of the tower is brought back to life.

The exhibition is curated by Charlotte Sprogøe.

When you visit Odense one of the things that surprise you the most is the river and the scenic landscape, which it creates through the center of the city. The river is the pivotal point of Sculpture Odense 14 and a symbol of the time dimensions, cultural structures and depths, which are also hidden in the idyllic fairy tale city of Odense.

Still Waters Run Deep wants to experiment by opening up a number of different dimensions of the urban space at the same time – dimensions which are normally either invisible or under-represented. Forgotten times, sociological, aesthetic layers and moods are excavated, emphasised and reflected. The sculptures are primarily new commissioned works created and chosen especially for Sculpture Odense 14. They do not necessarily relate to the factual historical layers of Odense but sometimes more to the material deposits and specific moods that exist and to the dramatic stories of the past – and the future.

Still Waters Run Deep works with the city itself as a sculptural form where openings, compartments, layers and dimensions exist. If you dive into history the ”kingdom in the middle”, like many other Danish cities, was created by a series of important cultural eras from the Viking Age to the Renaissance and later the Industrial Era. What makes the city so unique is that a lot of these epochs and cultures still exist because buildings or entire neighbourhoods from different eras have been preserved. In a way the city has been influenced by history in a very concrete and concentrated way. Odense is a place where all the different urban spaces seem to be folded into each other. The backyards of Odense are not closed but function as passages from one cultural-historic environment to another. This throws the styles and constructed forms of the eras into relief.

In the same way the river moves through different kinds of nature and cultures. Tue Greenfort shows us that in his work Å /River, which starts at the source, in Arreskov Lake with its leftovers of polluted water but also of Viking castles, through conventional farm land to the idylised Munke Mose with its dramatically staged fish ladder, past fin de siécle villa gardens with their own little quay berths, past the toxic area and on to the fjord. It is a reconstructed artificial landscape and influenced by time and a habitat, which is connected to a network of cultural, organic, industrial and commercial constallations.

Conceptual, fragmented and formal sculpture
Still Waters Run Deep is planned as a series of symphonic poems, limited and impressive with their own expression and focus and each of the 20 locations have been orchestrated in their own way. The works have no ending and no moral, instead they hint at moods and forms. The connections between them are something you create yourself on your way around the city. The artists have chosen their own locations, and made works based on the impressions and undertones, which they have sensed mentally and culturally. The city of Odense has an extensive sculpture tradition. A lot of them are figurative, monolithic and narrative. To create a different path, another kind of sensibility is unfolding in Still Waters Run Deep. A more conceptual and formal approach is present everywhere – a blue note.

A fragmented approach to the concept of sculptures can be seen here – for instance Nina Beier´s Liquid Assets, where a whole statue has been cut into pieces and becomes a series of objects instead. A lot of the works make up a complex, scattered whole. They become a kind of riddle which solves itself only in the eyes of the spectators who construct their own complete picture when they confront the sculptures like Mikkel Carl´s (New) Paintings Caught in the headlights of Parking Cars, a work which comes to life when caught in the headlights of parking cars. Sculpture Odense 14 works with a formal aesthetic art concept, which experiments with how sculptures, through their form, can comment on reality, the city and its surroundings. These are sculptures in motion, through time and thoughts. Sculptures that persistently refer to things outside themselves.

The use of urban space as an animated scene for contemporary art should be seen as contemporary art´s expanded use of found objects and the way it relates to its own time. Here we see it at its most extreme because the works are directly based on the surrounding reality. Public space is a complex exhibition space, because so much is going on at the same time. But it is also a very inspiring place to be because of the many agendas, visualities, structures and configuration points, which can be incorporated and developed upon. The line between where the artwork stops and the surroundings start are in some cases very blurred. The man-made and not man-made mix with each other. Both come to life and act in the works. Their construction and the constructions of reality are also both present. Like when the Czech artist Jirí Kovanda uses public space as an arena he can put into perspective. His actions are so misplaced that they become a stark contrast to their surroundings and his performative actions are so reduced and neutral that they almost turn into studies of basic forms, a kind of aestheticised social act.

The sculptures in this exhibition cover a wide field both when it comes to scale and form from the minimal to the monumental. The exhibition presents performances and living sculptures as well as stationary installations. They represent a series of different sculptural strategies in contemporary art from art scenes all over the world. The sculptures are primarily placed in backyards, passages, basements, on facades and in tunnels. The works do not enter into dialogue with the explicit but with the implicit. They are disturbed reflections of the city and of us in it, like Mikkels Carl´s shiny mylar emergency blankets in the underground carpark, Ib Agger´s aluminium columns and Theis Wendt´s reflections where the sculptures reflect a room which is not there. Others are of a more figurative nature, like David Douard´s figures who, like real window shoppers, stand there looking at the rooms inside. We reflect ourselves in the city, the culture and in each other and this is where the creation of the subject takes place. When we are confronted with this reflection, with what we see, we are made aware of our own blind spot, ourselves. The exhibition tries to pinpoint this displacement.