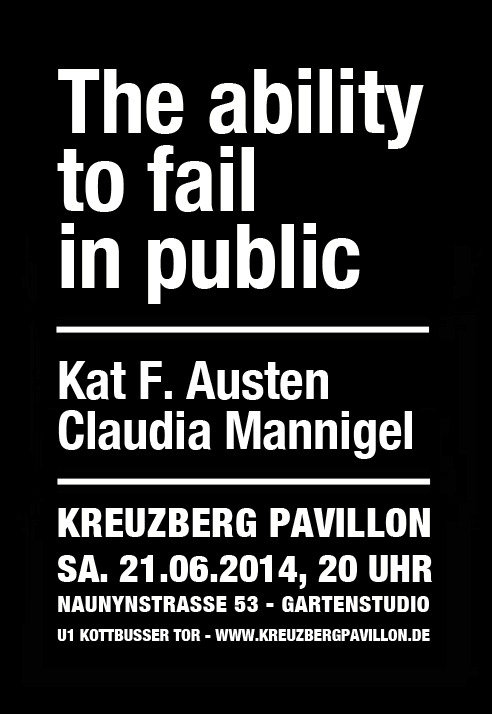 What does it mean to fail? The artists Kat F Austen and Claudia Mannigel explore the experience of sound by bringing the question of failure to the forefront, they highlight exhibiting uncertainty, experimental artworks, and the role of participation in art. Saying yes to doing an exhibition on the day of Fête de la Musique, Christopher Street Day and the FIFA World Cup they try to make site specific works within a very short time frame in so doing they fully embrace the possibility and the[ir] ability to fail in public.

At this time Kat F. Austen is not sure what she will show to the public. The interactive work she is developing this week may fail on the day. Time Slides* is a response to the square outside Kreuzberg Pavillon, its tranquility, its different characters during day and night and its relationship to cars and traffic. Within that square Austen will install an interactive sound installation that constantly creates and manipulates digital memories. If it fails to do so however, she will have to rely on her backup plan Time Slides #Fail, which aggressively and surprisingly introduces the busy traffic noise of Brussels into an otherwise tranquil space. It is so called because it does not create a layered history but rather is a projection of stimuli across time and space from one instant to another. Both works address sensory and cognitive overload by creating a disjuncture between the aural and the visual, between the lived and the digital.

* The artist wishes to acknowledge the indispensable help of Jun Matsushita in the making of Time Slides.

Claudia Mannigel questions the cultural dominance of sight suggesting to shift the focus from a visually mono-sensory experience of the world to a wider sensual approach by focussing on hearing and touch. She proposes a corporeal experience of space and time through sound and it’s material manifestation - vibrations. Sound activates, occupies, creates space and has the ability to create bonds and voids. On June 21st, she’ll investigate and enter in dialogue with the exhibition space at Kreuzberg Pavillon experimenting with it’s aural, spatial and vibrational qualities. By playing her sound piece wareal she’ll introduce very low frequency sounds into the space attempting to create a vibrationally sensitive environment. At this point, it’s open and completely unpredictable how the sound will resonate, embrace, make flow, amplify, divide, erase space and possibly even any notion of time. Her soundpiece might also just be a starting point.