Edge Habitat. The exhibition brings together a genealogy of works materialised in the form of bands of cotton fabric, 16 millimetres high and of varying lengths, and dyed in a conspicuously limited range of monochromatic colours. In Porto a hand-coloured 16 mm film, and a sound piece. 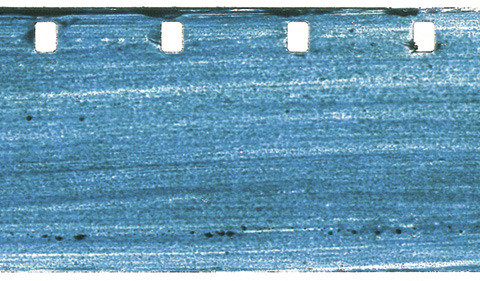 The term "edge habitat" refers to the border area where two adjacent ecological systems meet, where there is greater biodiversity and denser populations of various species of animals and plants. Adopted by Helen Mirra (b. 1970) as the title for this exhibition and for a recently published book surveying her practice in the 15-year span 1995–2009 (Edge Habitat Materials, Chicago: WhiteWalls, 2014), this expression is highly suggestive about an unbound artistic practice that resists obvious categorisation whilst having a consistent logic and a geographical vernacular, indicating a view of the world as a place where different subjects and objects cohabit and influence one another.

This exhibition brings together a genealogy of works materialised in the form of bands of cotton fabric, 16 millimetres high and of varying lengths, and dyed in a conspicuously limited range of monochromatic colours. Writing is in the core of many of these works; Mirra has frequently used these lines as a support for the typing of text. Among those, including the ones that relate to a specific philosophical essay or literary work and which have appropriated the convention of the index, we find ourselves confronted with eccentric uses of language. One is variously reminded of concrete poetry, haiku, or minimalist music. Here and there, the exhibition also incorporates drawings, paintings, two sculptures, a sound piece, and a book, as neighbours to the line works.

The work evidences a highly economical use of resources, procedures and formal solutions—frugality is an appropriate term in this case. As our relationship with Helen Mirra's work deepens, a way of seeing the condition and the experience of the subject in the world is gradually unveiled: a correlative experience that is rooted in such simple mechanics as sanding wood, folding a blanket, rowing a boat, or walking.

In the room at Culturgest in Porto set aside for micro exhibitions, three pieces by Helen Mirra are presented that are closely related with the genealogy of works reconstructed in her Lisbon exhibition to be held during the same period: a hand-coloured 16 mm film, Map of parallel 81˚N at a scale of one foot to one degree longitude, from 2001; a sound piece made in collaboration with Ernst Karel, A Map of Parallels 41˚ N and 49˚ N at a scale of ten seconds to one degree, from 2002; and an LP, specially released for this occasion, with the recording of a performance by Helen Mirra and Fred Frith in 2004, Kwangsi-Quail.
This presentation thus functions as a small satellite of the exhibition that brings to Portugal the remarkable work of an artist who still remains largely unknown in these parts, despite her already lengthy exhibition career, which includes, among others, solo exhibitions at the Renaissance Society, in Chicago (2001), Whitney Museum of American Art, in New York (2002), University of California Berkeley Art Museum (2003), Dallas Museum of Art (2004), DAAD Galerie, in Berlin (2006), KW Institute for Contemporary Art, in Berlin (2012), or Haus Konstrutiv, in Zurich (2012).