Through works by eight artists, the show explores the tension between the photograph and the object in light of the new and complex ways that we experience images in contemporary visual culture. 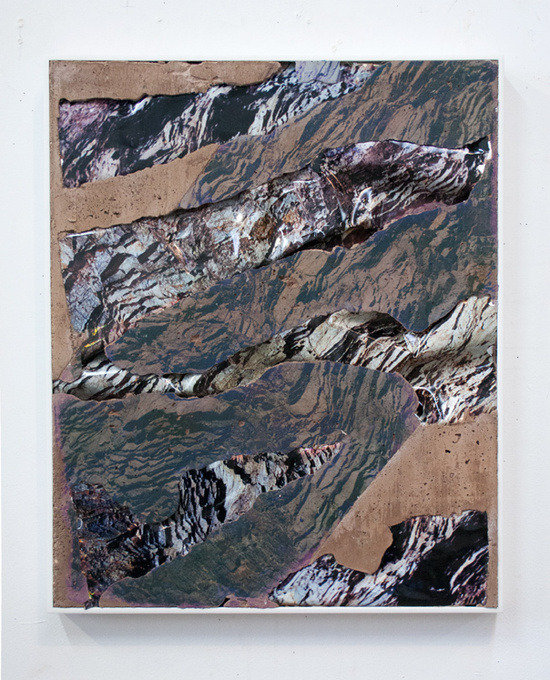 New York NY…Beginning 26 June 2014, Hauser & Wirth New York is pleased to present Fixed Variable, a group exhibition featuring works by Lucas Blalock, Ethan Greenbaum, John Houck, Matt Keegan, Josh Kolbo, Kate Steciw, Chris Wiley, and Letha Wilson. Through works by these eight artists, the show explores the tension between the photograph and the object in light of the new and complex ways that we experience images in contemporary visual culture: mediated by the computer, corrupted by Photoshop, unnoticed and ingrained in the urban landscape. Through process and play, the artists in Fixed Variable confront the reductive definition of the photograph as a truth-telling, two-dimensional document. The image is intervened with and acted upon, be it with Photoshop, poured concrete, or a simple crease.

For Lucas Blalock, the photograph is something that you ‘look through’. Blalock uses a large format camera to photograph deceptively simple, mundane still-lifes and environments. His subsequent Photoshop distortions unfold subtly, confronting the viewer with their unreality often through repeated close viewings. The resulting photograph is a white lie, a false image nominally but fundamentally true to the original in much the same way a Cubist portrait is to its subject.

Ethan Greenbaum photographs painterly and poetic moments on the New York street, from its constituent asphalt to graffiti-ed basement trapdoors, producing images that act as personal landmarks on a map of his neighborhood. Greenbaum prints on vacuum formed plastic that is molded around gypsum ceiling tiles. Recognizable from classrooms and government buildings, that material is soft enough to allow the artist to make gestural markings in its surface. The resulting artwork juxtaposes sculpture, photography, and painting in a holistic portrait of what is overhead and underfoot.

John Houck’s self-authored software program allows him to combine any number of colors on a given grid system. The resulting index sheet consists of hundreds of thousands of tiny colored grids, each with a different color combination. Houck folds the print, allowing the crease to intervene with the cold, rational framework – a human gesture in a field of computed data. He then photographs the result, reprints and repeats. Each layer invites a new error and disturbs the visual logic of the pixelated picture plane.

Matt Keegan works in sculpture, screenprint, and text, but photography is the constant referent at the root of his practice. Using stock imagery and his own photographs, he explores our relationship to iconographic systems, such as language, art historical symbols, and common idioms. Keegan explores how photography’s lexicon can be layered and juxtaposed to create new visual phrasings.

Josh Kolbo uses 35 mm film to create double-sided C-prints that stretch as long as 18 feet, scrolling off the wall with the stately presence of a minimalist sculpture. The photographs are of objects around the studio, like Pringles, a set of blinds, and the artist’s hands. These photographs are darkly lit, highlighting the various textures and shapes, but also removing all sense of context, space, and time. The objects within Kolbo's photographs are of little importance – their sole purpose is to show the possibilities of color and texture on the surface of a print as it hangs authoritatively on the wall.

Kate Steciw culls stock photographs from the Internet to create richly colored digital collages. Online images come from an infinite space, imbued with the promise of something concrete, that can never live up to its seductive photographic identity. The work itself invades space with its geometrically shaped frames, dangling from the ceiling or sitting playfully on wheels, ready to surprise the viewer as the Internet order never could.

Chris Wiley photographs overlooked buildings in Los Angeles, the city of ignored and neglected architecture. He captures light-filled moments of the city’s most humble surfaces, then frames those images with recognizable building and framing materials. The photograph and its frame play off of one another, putting image and object head-to-head and celebrating the forgotten physical vernacular of LA. The dissonance of Wiley's work teases out new meanings for both signified and signifier, as they wink at one another and the viewer.

Letha Wilson travels annually throughout the quintessential American West frontier (including California, Utah, and her home state of Colorado), returning to Brooklyn with dozens of rolls of sunsets, volcanoes, and rocky mountain formations. Her practice begins with the simple C-print, which she transforms into a sculpture – a landscape unto itself -- by meticulously folding the photograph or leaves it to buckle and recoil under the weight of poured concrete. She might then adhere a print to the front of the raw cement, leaving a transfer of a rock face, as if the image has rejected its paper self. The sculpture takes issue with the photograph, punching a hole in it, or casting it off to the floor.

The works on view in Fixed Variable are not about the content of the photographs comprising them. They concern themselves with the codes and gestures by which the photographs can be made and altered. After breaking a photograph down, each image is reconstructed, giving the medium itself renewed agency and opportunity.