The Birth of Stockholm..! Adeagbo bases his complex installations on the historic and cultural aspects of the city or place where he is exhibiting. Here he brings together Sweden and Benin, to generate displacements and new narratives. 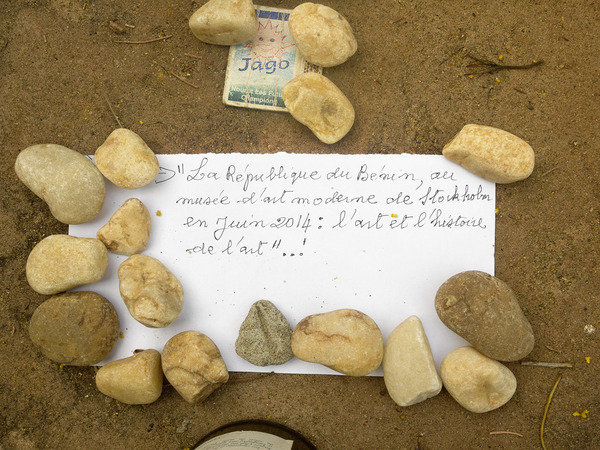 Moderna Museet has the great pleasure of presenting Georges Adéagbo’s first exhibition in Sweden. Adéagbo bases his complex installations on the historic and cultural aspects of the city or place where he is exhibiting. In the exhibition La naissance de Stockholm..! / The Birth of Stockholm..! Adéagbo brings together Sweden and Benin, to generate displacements and new narratives.

Since the 1990s and his participation in the Venice Biennale in 1999, Georges Adéagbo (b 1942 in Cotonou, Benin) has shown his work internationally. One vital aspect of Adéagbo’s method is his examination of how the viewer’s own cultural context explains and invests objects and events with meaning. His complex collages are based on his exploration of the culture and history of a city or place. Books, newspapers and clothes bought in flea markets in Stockholm and Cotonou are combined with illustrations and woodcuts and intertwined with the artist’s hand-written texts.

“In Georges Adéagbo’s new work for Moderna Museet, he creates a collage of events and individuals, where history, philosophy, politics and religion are recurring themes. Jesus, Queen Christina, René Descartes and Okwui Enwezor are all included in his installation. By creating new contexts and meanings, Adéagbo changes our habitual way of seeing the world,” says Matilda Olof-Ors, curator.

One of the oldest depictions of Stockholm is found in the Sun Dog Painting in Stockholm Cathedral. It shows the optical phenomenon of halos, an atmospheric event that appeared over the city in April 1535. During one of his preparatory visits to Stockholm, Adéagbo was captivated by this renaissance work of art. He has “translated” the Sun Dog Painting by ordering a woodcut of the painting from an artisan in his hometown of Cotonou. The paintings in Adéagbo’s installations are never made by himself but ordered from local artisans in Benin who make them according to his instructions.

In this exhibition, Adéagbo also explores the history and art collection of the Moderna Museet. Iconic western modernist works have been recreated in new versions. The goat with a car tyre in Robert Rauschenberg’s famous Monogram (1955-59) is reinterpreted in Adéagbo’s installation as Abraham’s biblical sacrifice. The exhibition features paintings based on photos from various pivotal events in the museum’s history, for instance, a photo from 1967 of the Moderna Museet’s former director Pontus Hultén and the artist Lucio Fontana, in the form of a black-and-white painting.

The exhibition is supported by Vinge.

More information on Georges Adéagbo:
Georges Adéagbo was born in Cotonou, Benin, in 1942. He studied law and business administration in Abidjan, Ivory Coast, and in Rouen, France, in the 1960s. He lives and works in Cotonou and in Hamburg, Germany. His works have been shown at the São Paolo Biennial, the Venice Biennale, Documenta, the Johannesburg Biennial, MoMA PS1 in New York, the Serpentine Gallery in London, the Toyota Municipal Museum of Art and Palais de Tokyo in Paris.

The press are invited to an open preview of Georges Adéagbo’s exhibition La naissance de Stockholm..! / The Birth of Stockholm..! on Friday, 27 June, at 6-8 pm.
At 6.30 pm, a conversation between Georges Adéagbo, Matilda Olof-Ors and Stephan Köhler. Language: English and French.