Artists Using Photography, 1960-1982. The show brings together approximately 150 works by 57 international artists, many of whom also work in other media such as video, painting, and sculpture. They took up the camera as a tool to pursue their broader artistic ideas, using photography not only as a document of fleeting performances, staged self-portraits, temporary assemblages, or remote interventions in the landscape, but also as the actual, lasting work of art 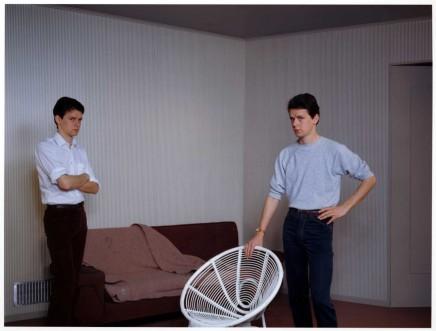 Last Picture Show: Artists Using Photography, 1960-1982, on view at the UCLA Hammer Museum from February 8 through May 9, 2004, is the first major examination of photography by artists who think of themselves as artists first, rather than photographers. Focusing on roughly a twenty-year period, The Last Picture Show brings together approximately 150 works by 57 artists, many of whom also work in other media such as video, painting, and sculpture. They took up the camera as a tool to pursue their broader artistic ideas, using photography not only as a document of fleeting performances, staged self-portraits, temporary assemblages, or remote interventions in the landscape, but also as the actual, lasting work of art.

The many works included reflect a range of issues and artistic interests, and provide a major genealogy testifying to the rise of the photographic practice as influential and evolving. Beginning with the early uses of conceptual and experimental photography by such artists as Yves Klein, Bernd and Hilla Becher, and Bruce Nauman in the early 1960s, the show concludes with the Picture Theory artists of the late 1970s and early 1980s, including Sherrie Levine, Richard Prince, and Cindy Sherman. Works by Los Angeles artists John Baldessari, Charles Ray, Edward Ruscha, and James Welling play an important role in the exhibition.

The Last Picture Show was organized by Douglas Fogle, curator at the Walker Art Center, Minneapolis, where it debuted in October 2003. The UCLA Hammer Museum is the exhibition's second venue.

THE EXHIBITION
Organized both chronologically and thematically, The Last Picture Show encompasses a wide range of art practices and movements such as Conceptual Art, Minimalism, Arte Povera, and strategies of image appropriation. The broad scope of the exhibition includes diverse and unconventional photographs that demonstrate how artists have used the camera to frame critical explorations and overarching themes. These include architecture and seriality, the body, self-portraiture and identity, found images, appropriation, interventions in natural and built environments, conceptual strategies, and the absurd, among others.

Highlights from the exhibition include Bernd and Hilla Becher's Gas Tanks (Spherical), 1963, which typify their analyses of ubiquitous and banal architecture in the 1960s; rarely exhibited Polaroid portraits by Andy Warhol; and works by Bruce Conner (Angel, 1975), Bruce Nauman (Eleven Color Photographs, 1966-67/70), and Charles Ray (Plank Piece I-II, 1973), all of which use the artists' own bodies in sculptural photographic experiments. Also on view are Cindy Sherman's Untitled Film Stills, explorations in self-portraiture that depict her as stereotypical female characters from Hollywood cinema; Sherrie Levine's After Walker Evans, 1981 in which she appropriates a famous image of the photographer Walker Evans; and another example of appropriation, John Baldessari's A Movie: Directional Piece Where People are Looking, 1972-1973.


THE UCLA HAMMER MUSEUM
Through its permanent collections, exhibitions and programs, the UCLA Hammer Museum endeavors to illuminate the depth and diversity of artistic expression through the centuries up to the present moment. Founded by Dr. Armand Hammer in 1990, the Museum houses several collections of art: The Armand Hammer Collection of Old Master, Impressionist and Post-Impressionist paintings; The Armand Hammer Daumier and Contemporaries Collection; and The Grunwald Center for the Graphic Arts, containing over 40,000 works on paper, and the Franklin D. Murphy Sculpture Garden on the UCLA campus.
In addition to selections from its permanent collections, the Hammer Museum presents a range of exhibitions of historical and contemporary art, architecture, and design. The Museum also presents approximately ten Hammer Projects each year focusing on the work of emerging artists. The series provides international and local artists with a laboratory-like environment to create new work or to present existing work in a new context, and reflects the Museum's commitment to serving artists by providing a responsive, flexible arena for presenting their work to the Los Angeles community.