Works from 1992 to 2014. Over 40 works shown in exhibitions in the past 22 years. The key piece in the first room is a sculpture made by Peking-based artist Lu Shengzhong. With Xu Bing, Maurice Weiss, Ai Weiwei, Yin Xiuzhen and others. 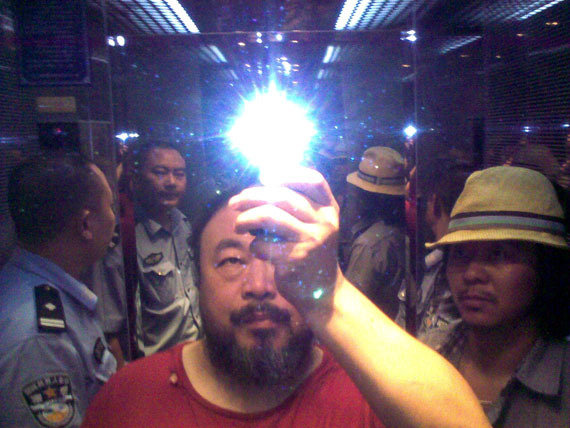 ‘My Chinese friends’ brings together over 40 works by Chinese artists that originated between 1992 and today and with only two exceptions have all been curated by Alexander Ochs and shown in exhibitions in the past 22 years.

The key piece in the first room is a sculpture made by Peking-based artist Lu Shengzhong. The daoist and professor of folk art mounted two red paper-cut figures into an opened traveler’s suitcase: Yin and Yang, positive and negative, correspond to the Chinese philosophy’s concept of contrary consecutive principles. Lu’s silhouette that was once created for a project called ‘Red Train’ depicts the guiding theme of the exhibition.

In Yin Xiuzhen’s photographs one finds young woman swimming in polluted water enjoying themselves, while for one year towards the end of the 90s Chen Liyang takes photographs of her monthly menstruation, capturing her blood in artfully crafted old mirrors.

Chen Guangwu changes the typography of the most important scripts of Mao Tse-Tung, and like that deprives all significance of them, at the same time as Wang Shugang’s monk sculptures are painted in red, the color of the communist party. This is how even works that even emerged from a self-referential idea turn into political pieces without that having to be pointed out, e.g. like in the case of the Ai Weiwei exhibition at Martin Gropius Bau.

ZhaoZhao, currently on show at the Berlin exhibition 'The 8 of Paths' and describes by most media to be the antagonist of He Xiangyu is represented in this show by a group of small scale paintings. These show portraits of resistance fighters, who not further named, but still give away clues of their Uighur background through the painted textile designs.

This block of images is then commented on by two photographs taken by Xiong Wenyun, showing wooden shacks on the Tibetan roof of the world. On the one hand they are decorated with the red star and slogans of the party and yet on the other hand this is contrasted with monochrome fabrics hanging from the shacks' window and door frames, which evokes connotations with Blinky Palermo.

RongRong's large scale portrait of Zhang Huan standing in the dim alleyways of the old summer palace reminds one of the recommencement of the Chinese contemporary art scene in 1989. And so does Zuoxiao Zuzhou with his iconographic piece 'Add a Meter to th Nameless Mountain', which show a performance from the period of promoterism.

At that time Zhu Jinshi already lived in the west. In 1979 together with Ai Weiwei and Xu Bing he was part of the forbidden exhibition 'Kollwitz Is Our Flag! Picasso Our Sword!' along the fence of the Chinese national museum. Based on this exhibition he developed the photographic piece 'Post Buddhist' that show a melancholic view through the window of his apartment at Potsdamer Straße in Berlin. (where he lived together with Qin Yufen)

Xu Bing is represented by his edition of 'Lost Letters', once created for Alexander Ochs. Back then in the former gallery premises on Sopienstraße 18 the artist found a xylolite floor, which served to be the source to print for a 10 meter long format from, which was then reproduced en miniature using plumb letters from the Weissensee art college.

Like Ai Weiwei Xu Bing's lived in exile in New York for a long time. Nowadays he has become the Vice President of the CAFA - the Central Academy of Fine Art - in Beijing, where Ai Weiwei is still waiting for the returning of his passport that was takes from him in 2011.

Ai Weiwei's sculpture is placed in correspondence to a large scale tree dimensional drawing by Liu Wentao. In the same room one comes across a small format painting by Qui Shihua that reminds of his banishment into the Gobi Desert at the time of the cultural revolution and simultaneously relates to a wall filling 'nature piece' made from dries grass and flowers by Qing Qing.

As one wanders towards the fourth room you will find a motif from Miao Xiaoshun's 'Last Judgment in Cyber Space'. Then entering the fourth room there's works on paper by Lu Song, Fang Lijun and Tan Ping. Whereas 1982 born Lu Song quotes ideas of western romanticism in his landscapes, Tan Ping reacts to a close relative's cancer disease with cutting deformed cell shapes into his printing plates.

With the help of a DAAD scholarship Tan Ping began his studies at the Berlin University of Arts (UdK) under Klaus Fussmann 25 years ago. Today he himself is a teaching professor at the Central Academy in Beijing. And as the students at UdK are still waiting for their professor Ai Weiwei to arrive, Fang Lijun puts his small hands upon his face as seen in his self-portrait from 1998.

Alongside the mentioned artists in the exhibition "My Chinese Friends' also represents works from Xu Shun, Wang Yin, Cai Jin and photographic portraits taken by our German friend Maurice Weiss, who travelled together with Alexander Ochs to China and like that also tells of an old story between Beijing and Berlin.