Enlightenment Discourse on the Origins of Architecture. He is distinguished by a series of projects in which he assumes different roles as he reconstructs historical moments and mimics them in tableaux vivants. 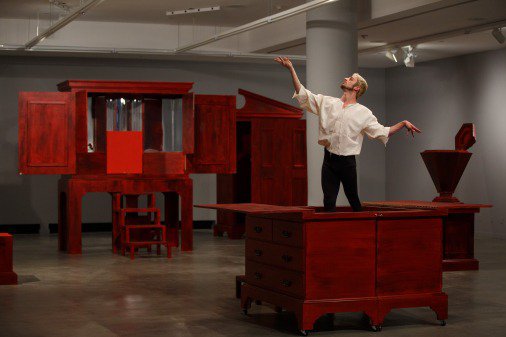 The work of London-based artist Pablo Bronstein (Buenos Aires, 1977) is distinguished by a series of projects and public interventions in which he assumes the roles of art historian, architect and choreographer as he reconstructs historical moments and mimics them in tableaux vivants. Camouflaged within the guise of history and imitating architectural forms or urban lifestyles from a certain era, Bronstein reinvents the past with great subtlety and perception.

The newly commissioned project that Pablo Bronstein creates at REDCAT functions as a "staged essay" where the artist articulates, by means of a series of drawings and furniture, the origins of architecture from the naturalistic perspective of the Enlightenment. In a certain way, Bronstein satirizes the insistence with which the architectural culture of the Enlightenment sought to guarantee a "nature" uncontaminated by historical events.

In the gallery, a series of drawings and furniture/buildings appear and together create a traditional 18th-century room. Each unit changes shape and location by means of a set choreography, transforming the suite into an urban plaza reminiscent of the idealized view of a city in traditional Renaissance painting. The intricate setting is activated by a performer who opens, closes and rearranges the objects in the exhibition, and then returns them to their initial state. In their open position, these objects create a complex pattern, imitating the possible uses of a bourgeois city. In their closed position, they return to the rigid and symmetrical grid of the room, an abstract representation of State power and order. Each of these pieces also functions as a sign that refers indirectly to the search for the first building or an architectural model of universal validity. By exaggerating their decorative and constructive morphology, these pieces seem to have an essential and practical function of creating a "real architecture" that emphasizes not the mythological or religious perspectives that dominated in the past, but the archeological interests of Enlightenment thinkers and the historical research into the era.

However, the inherent contradictions that Pablo Bronstein establishes between the drawings and furniture/buildings—the shapes they refer to, their irreducibility to pure theory or mere physicality, functionality or artifice—are also ironic comments about the role of art historians, highlighting the pleasure but also the danger of historical discourse. Pablo Bronstein establishes processes that enable fissures between the past and present, the human and inanimate and, above all, between the practice of history and lived experience. He also questions the common ground between the construction of discourse and the subject of study, as well as our own body and the way we look through objects, involuntarily searching for their capacity to reveal a history to us. As in any historical discourse, Pablo Bronstein creates a temporary, incomplete setting, one that can always change shape, demonstrating to us that there is no single origin, and that the original always seems to be preceded by its copy.

His books Postmodern Architecture in London (2007), Ornamental Designs (2008), and Gilded Keyholes (2013) have been published by König Books.

The exhibition is accompanied by a small publication with an essay from Ellis Woodman (architecture critic and executive editor of BD, London, UK).