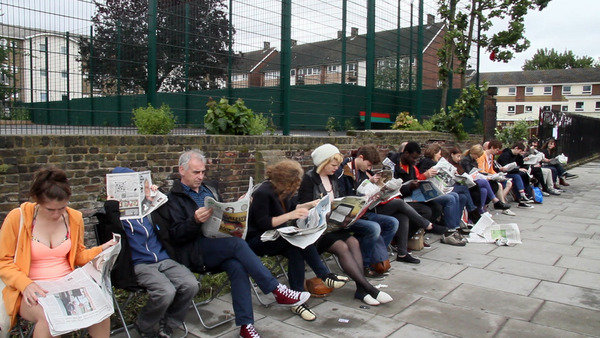 Ann-Marie LeQuesne stages performances with groups of people in public places. Her invitation to participate is an open one. The actions are simple, but are often disrupted or altered by their location. LeQuesne invites both the participation of her collaborators and the attention of those passing by. The action is then filmed or photographed, becoming material for a subsequent restaging from the documentation.

Encore (2012) re-enacts the enthusiastic applause at the end of a children’s’ concert in Brooklyn. News (2013) plays out a nice day in the park reading the paper…then things get messy. In Hive (2011), participants were asked to count up to an assigned number, walking amongst the group as they counted and becoming still when they reached their number.

Ann-Marie LeQuesne is featuring different videos every two weeks at the AC Institute through July 26, 2014.

BIOGRAPHY:
LeQuesne grew up in the United States, but has lived most of her life in the United Kingdom. She has a wide range of experience in collaborative performances, including events in the Tate Modern, the Tate Britain, a performance at the Arsenal Football Grounds, and a staged event on an icebreaker in the Arctic Circle.