45th edition. The summer photography festival features 50 exhibitions and stages around the city. "To show a photograph at Arles is a performance: it means displaying a work, exhibiting it appropriately, and exposing it to a test new to many". 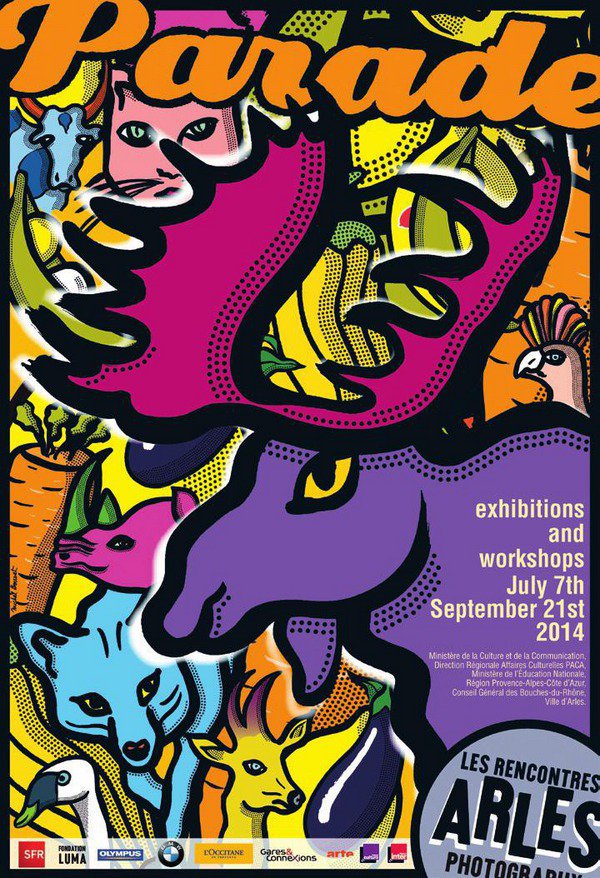 Arles has always been a theatre for me. Every year, for fifteen years, it becomes a citywide stage, putting photographers in the spotlight and at the microphone (or even the megaphone!) to communicate directly with their viewers.

With Olivier Etcheverry’s scenography and Nicholas Champion’s teams (assisted, in particular, by Patrice Falcot), we create settings for their works on marvellous sites invented for the occasion. These designs are executed by a technical staff of over 70 people, directed by Olivier Fisher and Franck Billela (construction), Véronique Férré (painting), Etienne Esnault (lighting), Françoise Perrono (hanging), and many others: metalworkers, assemblers, movers, and runners most of them theatre and film professionals.

Together with Aurélien Valette, Olivier Koechlin’s teams, Valentin Bardawil, and Claudine Maugendre, we create shows to convey dramatically scenarised and musically scored journeys into photographers’ works, both live and online, all through the Arlesian nights.

The electricity of a premiere reigns throughout the ten days of the festival in Claudine Colin’s press office and Agnès Benichou’s protocol office, as well as during the marvellous parties organised by Anne Igou and our partners to thank visiting artists and journalists -- the only VIP events in a festival otherwise wholeheartedly open to all.

To show a photograph at Arles is a performance: it means displaying a work, exhibiting it appropriately, and exposing it to a test new to many, that of live public viewing, from the simple exhibition visit to the 2,000 spectators of the Théâtre Antique, by way of numerous debates, workshops, and the fascinating seminars arranged by Françoise Docquiert. The exhibition production team, currently Julie Héraut and Safia Belmenouar under the direction of Aurélie de Lanlay, prepares in minute detail and at long distance the arrival in Arles of photographs from near and far.

Their sole aim: when the curtain goes up, despite our carnivalesque conditions of exhibition, the artist, the curator, or the collector must be completely satisfied. There again, the theatrical setting amplifies our perception of happiness or dissatisfaction. The team must surpass itself in planning its complex logistics, for The Rencontres displays every year as much as a classic photographic institution would in five years or ten.

Michel Bouvet creates the posters that attract such attention to The Rencontres and to themselves. Award-winning, exhibited throughout the world, they are so theatrical that theatres themselves copy them.

Soon follows the printed programme, that feather-light but precious souvenir of a summer visit. Our graphic artists (Azadeh Yousefi, Stéphane Tanguy, and Ghaïta Tauche-Luthi) perfect each detail to serve the visitors who do us the honour and pleasure of coming to our little city. Its content is presented in a superb mobile app; a website allows special moments to be relived again and again.

The catalogue, produced over three months under the supervision of Joséphine Gross by the Rencontres catalogue production team and Géraldine Lay for Actes Sud, is our best ambassador in attracting artists and visitors. Finally, trademarked Rencontres products, whose sales guarantee our independence, fly off the shelves of the shops managed by Stéphanie Retière and Morgane Robcis.

This programme foundation allows the various educational departments to provide their specialised offerings: the Rentrée en Images (serving 10,000 students and 330 classes every year) under the supervision of Isabelle Saussol; workshops, where Fabrice Courthial gives concrete form to the inspirations of the photographers who lead them; photo folio reviews under the time-conscious yet gracious administration of Anne Fourès; and the work of the fifteen docents who guide and enlighten visitors.

As in any show, there are small parts, but not necessarily small actors. The Rencontres’ 200 exhibition guards are in the glare of the footlights: throughout the summer, they are likely to be our visitors’ first contact and first impression. The majority of them are long-time job seekers. With the support of the French state and the Chamber of Commerce, we at The Rencontres give them four months of training (reception, foreign languages, information technology, safety, and so forth) before their three-month term of employment. Upon its completion, they receive certification to help them in their job search. Under the supervision of Monique Lopez, they join the troupe when the big tent goes up and leave when it comes down. It is difficult to imagine, if one has not experienced it, the emotion of the group's farewells.

A real troupe! A magnificent troupe. Fifteen permanent employees and more than 360 contributors, superbly coordinated by Aurélie de Lanlay, an administrator who meets crises of an extraordinary variety with incomparable coolness and dash. Her right hand is the exceptional Agnès Benichou, whose strength and sympathy have given support to many staffers during the crush and rush of June and July.

Yes, this little world is not untouched by emotion. Whatever their task, all of them love art. They are the first to experience a programme; they are also those who analyse it the most deeply. They have seen so much: backstage, in the wings, in every nook and cranny. Their eyes have been sharpened, their appreciation of other human beings as well.

I love this team, which has taught me so much, just as I love the photographers who enrich my imagination. Many institutions dedicate themselves to the work of dead artists, avoiding the stress of dealing with the living. That stress and that dissatisfaction with the status quo, insatiable before the possibilities of production and recognition, are what motivate me to do what I do.

To make an artist visible is the most beautiful gift one can offer him. We strive to make Arles an effective place in the spotlight; the artists we invite return the favour by expending an extraordinary energy here.

The Rencontres are also a forum for opening up the field of photography. Recent years have seen many themes offered to the public, as well as to professionals and teachers: vernacular photography, Chinese, Russian, Mexican, Argentine, and South African; photography not merely outside institutions but on building fronts or in cyberspace; and the soaring expansion of the book form.

We have championed the specificity of photography as a genre, but also the permeability of its uses, demanding a transversal, non-sectarian programming by the lights of multiple curators of international standing.

This troupe has seen the passage of many young people -- often interns -- come to learn here; soon entrusted with great responsibilities, so constant is the demand, and supported by a few experienced master-acrobats. All should be named, so much have they contributed to reinventing our stage. Alain Arnaudet and Alice Martin successively administered the first years of this experiment. Pascale Giffard, Eva Gravayat, Prune Blachère, Sylvain Hébel, Valérie Louic remember the risks we ran to better serve photography, which some people then restricted to the status of a second-rank spectacle.

They eventually took wing to other institutions, where they now have the time and the means to work differently. Despite the distance separating us, they have a remained a faithful group of friends and often get together with the troupe at nightfall.

It is now my turn to leave this troupe to pursue elsewhere a journey begun 34 years ago, thanks to those who made the difficult choice to be photographers.

How to leave the stage, if not theatrically? The register was set for high drama (thwarted love, betrayal, political intrigue, buffoonery, epic) rather than light comedy. So it goes for places that stir the soul. Arles moves one forever if one is touched by it even once.

Thus, it was only natural to give a last parade to some of the many friends who shaped the recent history of the festival: Raymond Depardon, Christian Lacroix, Martin Parr, Lucien Clergue, Erik Kessels, Bill Hunt, Joan Fontcuberta, Luce Lebart Nostalgia not being our style, they all offered new and exciting proposals.

But we also wanted to invite artists and curators never before seen at The Rencontres, in the first rank of whom we find David Bailey, Vik Muniz, Patrick Swirc, Artur Walther, Daile Kaplan, the five curators and ten nominees of the Prix Découverte, and many others, including the actor and director Vincent Perez, whose first passion was photography.

Many thanks to the private partners who allowed us to develop in total artistic liberty, who brought in friends, clients, and collaborators, and even creativity, adding to the effervescence of the event. Their fidelity allowed us to reassure our accountants, Huguette Veyrier and then Anne Galle, when we took all those risks. Thank you too, public partners, for your staunch support.

Thanks to the people of Arles, to its charming hotels, delicious restaurants, tireless taxis, sunny café terraces, enthusiastic municipal teams, welcoming cultural institutions, to Jean-Paul Capitani’s Association du Méjan, to the valuable tips from Fred Oggier, and to the 30-year commitment of Claude Sintes, who believed and believes still that his museum’s archaeology has every connection with photography. The quality of these and of their work is an enormous part of The Rencontres’ indisseverable roots in Arles.

Thanks to all our friends, dear and prominent among them Lucien Clergue, Jean-Maurice Rouquette, and Maryse Cordesse, and to the outstanding figures of the board, who most actively supported this exciting adventure.

Thanks to those who made the renewal of this festival in a new format possible: François Barré (president of the association from 2002 to 2009), with whom we wrote and staged it, and Jean-Noël Jeanneney (president since 2009), which whom we expanded and developed it. Their unflagging and clear-sighted support, quickly mingled with friendship, was essential to the success we have enjoyed. Sometimes advisors, sometimes ramparts, these two presidents, so different, so responsive, continually encouraged boldness and singularity.

My sincerest good wishes to my successor as he invents new seasons and nurtures the changing format of the festival for future generations of photographers. I wish he too may know happiness in Arles.

EXHIBITIONS AND PRICES
Exhibitions from 7 July to 21 September inclusive (some central city sites close on Sunday 24 August, Sunday 31
August and/or Sunday 7 September).
Daily from 10am to 7.30pm, unless otherwise stated.
The Rencontres d’Arles are entirely bilingual (French/English).
The exhibition catalogue will be available in July (jointly published by Rencontres d’Arles and Éditions Actes Sud,
in a French and English version). Price: €46.

PRICES
Professional pass: €63 - no concessions
Non-transferable accreditation is restricted to photography and image professionals. Proof of professional identity is
required. Valid from 7 to 13 July, it gives unlimited access to the exhibitions and evening screenings at the Théâtre Antique.

Group services
The Rencontres d’Arles offers discounts for groups of 10 people and over upon reservation. Discounts are also offered to work committees and associations. The festival also offers customised guided tours with liaison staff/photographers and, if required, can devise specific programmes lasting several days.
For more information and reservations: Han Xiao / reservation@rencontres-arles.com / +33 (0)4 90 96 63 39

‘LES RENCONTRES D’ARLES’ APP BY SFR
The 2014 Rencontres d’Arles offers visitors an app created thanks to the support of SFR, a festival partner for the 10 th consecutive year. It may be downloaded for free to all iOS and Android smartphones and tablets, and provides practical, entertaining and original features. The app allows visitors to discover exhibited artists, artist biographies, exhibition sites’ locations and other useful information, as well as providing a handy festival diary. Users can customise schedule contents through a bookmark system. Added extras: geolocalisation services and a camera function named ‘Studio Photo’, which allows users to take pictures featuring the official festival mascot. App devised by SFR.

By bus
Regular services to and from Marseilles, Nîmes and Avignon.

For more information
www.lepilote.com (for getting around the Bouches-du-Rhône)
www.edgard-transport.fr (connections to and from the Gard region)