Featuring approximately 90 works by nearly 40 international artists, and including painting, sculpture, drawing, printmaking, photography, film, video, installation and performance, "Damage Control. Art and Destruction Since 1950" presents many of the myriad ways in which artists have considered and invoked destruction in their process. Taking the form of a shell of a 1950s bus in a synthetic material with the look of stone, "Many dreams" by the Martine Feipel & Jean Bechameil merges in with the verdant park environment as if time had gradually fossilized it. 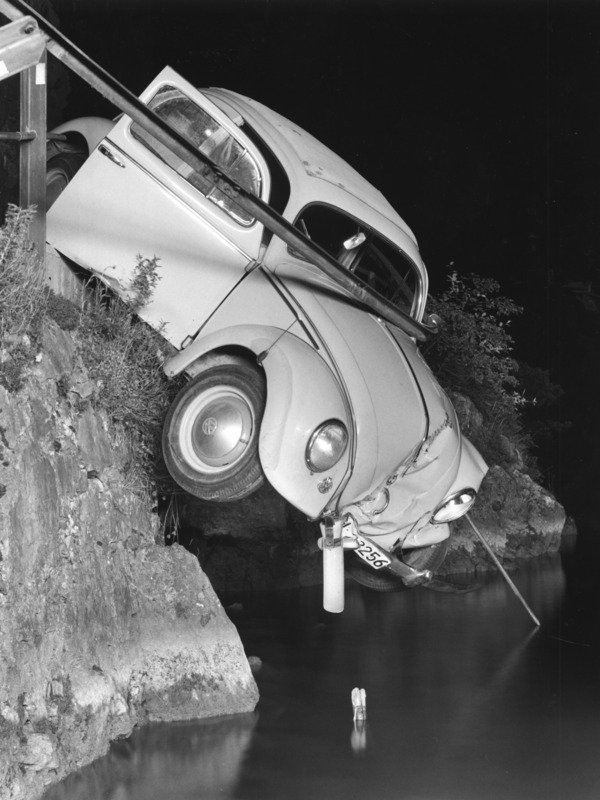 Destruction has played a wide range of roles in contemporary art - as rebellion or protest, as spectacle and release, or as an essential component of re-creation and restoration. Damage Control: Art and Destruction Since 1950, on view at Mudam Luxembourg from July 12 through October 12, 2014, offers an overview, if by no means an exhaustive study, of this central element in contemporary culture. Featuring approximately 90 works by nearly 40 international artists, and including painting, sculpture, drawing, printmaking, photography, film, video, installation and performance, the exhibition presents many of the myriad ways in which artists have considered and invoked destruction in their process.

While destruction as a theme can be traced throughout art history, from the early atomic age it has become a pervasive cultural element. In the immediate post-World War II years, to invoke destruction in art was to evoke the war itself: the awful devastation of battle, the firebombing of entire cities, the dropping of the atomic bombs on Japan, and, of course, the Holocaust. Art seemed powerless in the face of that terrible history. But by the early 1950s, with the escalation of the arms race and the prospect of nuclear annihilation, the theme of destruction in art took on a new energy and meaning.

In the decades since, destruction has persisted as an essential component of artistic expression. Damage Control: Art and Destruction Since 1950 offers an overview of this prevalent motif. Many of the earlier works in the exhibition directly record nuclear bombs or their aftermath, or use such documentation as a starting point for broader commentary. The use of found film, television, and photography as a source expanded more widely in the 1960s as the importance of media coverage of disasters on a cataclysmic or everyday scale increased.

Other artists adopted more conceptual or symbolic approaches to address the potential for destruction in the world or as a reaction to social conventions. Destruction has also been employed as a means of questioning art institutions or challenging the very meaning of art itself. In many of the artworks on view, regardless of time period, medium, or intent, the desire to control destruction or to emphasize the integral relationship between construction and destruction is central.

But whether as rebellion or protest, as spectacle and release, or as an important facet of re-creation and restoration, it is apparent that for generations of artists internationally, destruction has served as an essential means of considering and commenting upon a host of the most pressing artistic, cultural, and social issues of our time.

Damage Control: Art and Destruction Since 1950 is organized by the Hirshhorn Museum and Sculpture Garden, Smithsonian Institution, Washington, DC, in association with Mudam Luxembourg and Universalmuseum Joanneum/Kunsthaus Graz.

The international tour of Damage Control: Art and Destruction Since 1950 received major funding from the Terra Foundation for American Art, and is also made possible through generous support from the Swiss Arts Council Pro Helvetia and the Japan Foundation.

Main partner of the exhibition at Mudam: SES

events within the framework of the exhibition

This summer, the esplanade in the Draï Eechelen park will feature the artwork Many dreams by the Luxembourg artist duo Martine Feipel & Jean Bechameil. It is the first time this major sculpture will have been presented in Luxembourg after having been shown in Belgium (Beaufort04 - Triennale of Contemporary Art by the Sea) and France (in the park of the Château d’Avignon and at the Pavillon Vendôme – Centre d’art contemporain in Clichy). Taking the form of a shell of a 1950s bus in a synthetic material with the look of stone, the work merges in with the verdant park environment (that offers a panoramic view of Luxembourg city centre) as if time had gradually fossilized it. It invites us to experience the feelings that overcome us “when we are alone in front of the sea or a vast landscape.”

Artworks by Martine Feipel & Jean Bechameil are always immersive, questioning the perception we have of external and internal spaces and thereby inviting us to undergo a perceptual experience of them before turning our gaze on our own desires and expectations. In 2011, with the installation Le Cercle fermé (2011) that was produced for the Luxembourg pavilion at the 54th Venice Biennale and presented at Mudam during the exhibition Atelier Luxembourg (2012–2013), we had an accurate representation of the artists’ interest in the question of the perception of habitation spaces in both a material and a symbolic sense. In the case of Many dreams, Martine Feipel & Jean Bechameil invite us to examine everyone's own mental space by particularly addressing the related themes of travel, the unknown and desire. It puts the viewer in a contemplative and paradoxical state by providing, as the artists point out, “a dreamlike vision of our aspirations mingled with their incompleteness, ultimately referring us back to the vulnerability of all things.”