The exhibition focuses on the practices and actions by interdisciplinary art collective in the last two decades up to the present. Through various strategies of action, it propose an exploration of the artists that work with social, political and institutional conflicts. 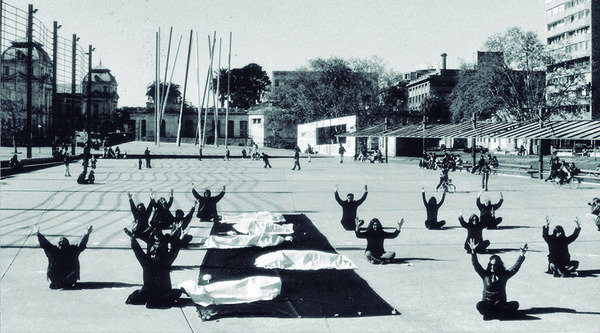 The exhibition Acción Urgente [Urgent Action] is the result of exhaustive research by Cecilia Rabossi and Rodrigo Alonso. It explores the actions carried out by interdisciplinary groups of artists from Argentina, Bolivia, Brazil, Chile, Paraguay, Peru, and Uruguay during the last twenty years, all of which form part of a phenomenon that became vital to the region’s art scene during this period. In response to the surrounding political, social, and economic realities, these groups have deployed artistic practices geared to making an array of issues visible. The works in the exhibition evidence the originality, spontaneity, and range of aesthetic resources used in actions that engage the public space of the city as setting.

Such actions include the satirical and provocative laughter of Grupo Etcétera as, in the nineties, it staged public denouncements of those involved in perpetrating repression during the last military dictatorship in Argentina; the reinvention of graffiti by the Mujeres Creando collective in Bolivia; and the original proposals of Frente 3 de Fevereiro in Brazil to condemn racism. Together, these and other outstanding proposals formulate the dialogue that runs through the exhibition.

The artists’ collectives challenge individual creation for the sake of highly political collective authorship. They operate at the margins of institutions and use the mass media to circulate, produce, and communicate their actions. As such, these collectives formulate new modes of aesthetic and political experimentation in the public space.

To the second floor by staircase.
Large window overlooking to the river.

To the second floor by staircase. Large window overlooking to the river presents a plan of site-specific interventions by Eugenia Calvo, Leandro Tartaglia and Ivana Vollaro. Taking the concept of Le Corbusier about the window as "wall of light", the curator Lara Marmor proposes this exhibition which opens a new edition of the Contemporary Space in Proa.