Recent work by Sue Tompkins, Jim Lambie, Luke Fowler, and Jonnie Wilkes. Each based in Glasgow, these artists share an outlook with deeply psychological underpinnings, experimenting with the communicative forms and effects of various mediums. 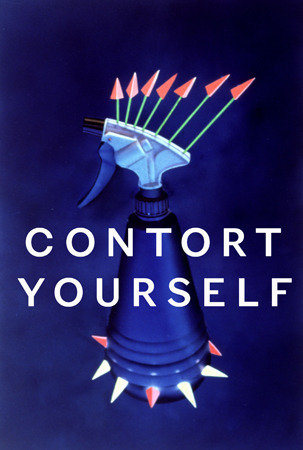 Kayne Griffin Corcoran is pleased to present Contort Yourself, a series of solo exhibitions disguised as a group show curated by The Modern Institute, Glasgow which includes recent work by Sue Tompkins, Jim Lambie, Luke Fowler, and Jonnie Wilkes. Each based in Glasgow, Scotland, these artists share an outlook with deeply psychological underpinnings, experimenting with the experiential and communicative forms and effects of various mediums as diverse as painting, installation, sound, text, and film.

Sue Tompkins’ practice is lead by an enquiry into language and personal expression, using the spoken, sung, and written word. Over several years Tompkins has incorporated text, sound, installation, and live performance to address language in visual and spatial terms. With text as both a focus and subject matter for her work, Tompkins experiments with the effects of combining, accumulating, and fragmenting text. Gathering phrases and words from everyday encounters, these works prompt us to experience the flow of language in a state of flux. Rather than acting as a background to the text, Tompkins’ use of paint is integral to relaying or distorting the meaning of these words. Applying paint liberally onto each canvas, often directly using her hands to pull and push across its surface, she responds to the spatial restrictions imposed by its frame and indeed by the space of the gallery itself. Contort Yourself includes a series of new paintings by Tompkins that continue these explorations.

Working on a scale and intensity that takes over the gallery space altogether, Jim Lambie’s work is informed by an ongoing investigation into the psychology of space and color. Deeply rooted in color theory, Lambie draws parallels in his works with the concept of synesthesia (whereby the experience of one sense sparks a response in another, such as the visualization of sound through color). His site-specific installations envelop existing architecture as a key inspiration and part of the work. Contort Yourself includes thirteen of Lambie’s ‘ladders’ extending fifteen feet from floor to ceiling, accentuating the height, volume, and symmetry of the space. With mirrored inserts between rungs and coated in luminous colors these ladders are devoid of function. Instead they reflect the light, color, and texture of their surroundings, creating a ricocheting environment that could easily belong to another sensory dimension.

Following on from his celebrated works What You See Is Where You’re At (2001) and Bogman Palmjaguar (2007), Luke Fowler exhibits his Turner Prize-nominated film All Divided Selves (2011). Taking up the legacy of radical psychiatrist R.D. Laing, Fowler weaves archival materials with his own filmic observations, married with a dynamic soundtrack of field recording and recorded music by Éric La Casa, Jean-Luc Guionnet, and Alasdair Roberts. A charismatic, guru-like figure who spearheaded the social and cultural revolutions of the 1960s, Laing argued in his now classic 1967 text "The Politics of Experience" that normality entailed adjusting ourselves to the mystification of an alienating world. The film concentrates on archival representations of Laing and his colleagues as they struggled to acknowledge the importance of considering social environment and disturbed institutional experience as significant factors in the aetiology of human distress and suffering. All Divided Selves describes the vacillating responses to these radical views, including the less forgiving responses to Laing’s later career shift from well-recognized psychiatrist to celebrity poet.

Additionally, a new sound work by Jonnie Wilkes will be included in Contort Yourself. While viewing the exhibition visitors are invited to play German Pizza Party, a limited edition vinyl released this year by the Vinyl Factory and The Modern Institute, Glasgow. Jonnie Wilkes is an artist, electronic music producer, and one part of the DJ duo Optimo.