Retrospective, 1938 - 2009. Harmonious and unexpected like messages that unleash the most varied feelings, his works continue to add to the patrimony of Madi' forms. "simple" visual object, to use Arden Quin's words. 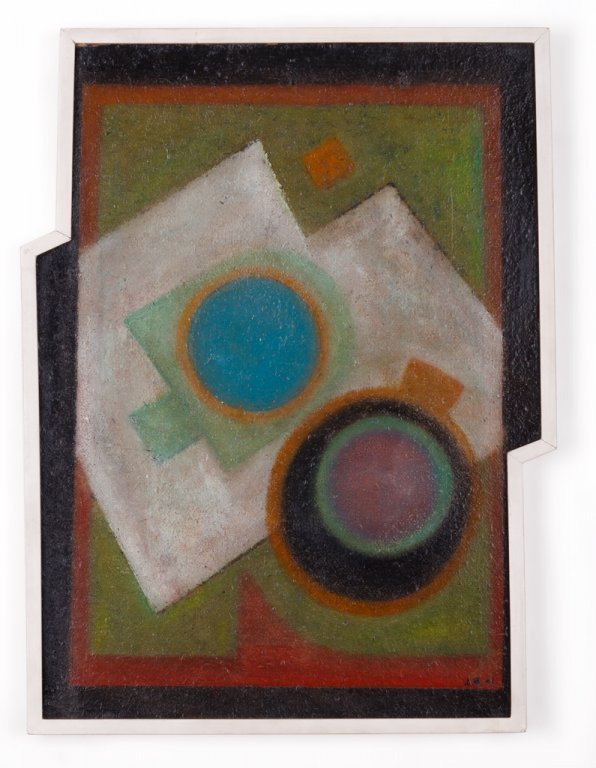 On September 27, 2010, in his Parisian home of Savigny-sur-Orge, at the age of 97 and fully lucid, Carmelo Arden Quin ended his splendidly dynamic journey surrounded by the love of his wife Sofía Kunst, of the Uruguayan artist Bolívar and of dozens of artists who had absorbed his legacy and who follow the Master’s aesthetic propositions throughout the most varied scenarios in the world. Arden Quin was born in Rivera (Uruguay) on March 16, 1913, coincidentally at a time when European avant-garde movements were already seeking to emancipate from the sacrosanct law of nature to develop their own rules and their own creative ethos, facilitating the gestation of geometric abstraction.

We know that in 1936, he sent one of his paintings to Montevideo’s Ateneo at the invitation of the professor Torres García, who had been announcing “universal constructivism.” The young artist did not belong to the professor’s atelier but would hold long and productive conversations with the great Uruguayan artist. In 1938, already living in Buenos Aires, he began to study Philosophy and Liberal Arts and started to paint his first non-orthogonal works. In 2007, in a conversation in Paris with Sofía, Carmelo Arden Quin, while referring to some basic characteristics of the Madí movement—of which he was one of the founders in Buenos Aires in 1945—, said: “Supports before Madí, both with figurative and non-figurative art, is a surface with four right angles in the shape of a square or a rectangle; up to that time, painting was carried out on that support, even geometric painting. The dimensions (height-width) are conceived using this criterion. In search of new shapes of planes, Madí starts to work with other polygons that could be regular or irregular: triangles, rhombuses, pentagons, hexagons, individual or juxtaposed, of which circles are also a part. This is the synthesis of Madí works.
Simple works, without metaphysical aspirations or of any other kind.”
At the age of 94— that’s how old he was when this conversation took place—the artist was as lucid as in his youth and adulthood, but wiser. Those clear-cut definitions are a great synthesizer and at the same time compel us to cut through the road travelled, at least to some extent, to arrive at the simplicity of which Arden Quin was referring.

In the early decades of the 20th century, when Cubist artists propose a break with a painting’s virtual space—which had existed in perpetuity throughout the history of painting as the window through which representational images were projected—conquering planimetry represented quite a step, although Cubists continued to maintain a figurative quality. But with the conquest of the plane even in non-figurative paintings, the orthogonality thereof once again brought about that window that now, eerily, recreated background and figure in a sketch wherein the nucleus of the work was inscribed in the field that served as the background.

In 1946, Madí artists theorize and propose the cut-out frame and arrive at the latest consequences of the representational crisis. The idea of a rupture with the orthogonal frame liberates the work from the field or the background to leave solely a nucleus that now acquires the most varied plane forms within the space, as would any other kind. And it is here where the longed for total break with a metaphysical past is consummated and acquires the condition of a “simple” visual object, to use Arden Quin’s words. The artist spoke of other Madí traits in that conversation: “In addition to the plane, curves, undulating surfaces and coplanals, which are absolute inventions of the movement, [it] structured the monochrome plane, in black and white with complementary [colors]. In other words, the artist has absolute freedom with color on pure planes that constitute a form, in addition to the multilateral element and the mobility of the planes, of concave and convex reliefs and of perforations that pierce the surface, leading us to think of a creativity that invents objects which explain themselves, such as a tree, a bouquet of flowers, etc…

On the other hand, the extent of Madí materials is limitless, for as long as it’s a smooth surface it could be anything from paper to various plastics, passing through wood and metal.” The word “invention,” so common in Arden Quin’s vocabulary, takes us back to that sole edition of the magazine Arturo (Bs. As. 1945), where the members of the editorial department used the word to deliberately avoid using “creation,” because the latter had a strong theological content that was being avoided ever since Mondrian and the Constructivists worked on the fringes of geometry. “Invention” brings us closer to the idea of an engineer, operator or architect, implying first of all the rational use of resources as opposed to the world of “expressions” or of “inspiration” that is based, according to these artists, on a still romantic subjectivity. But I find it necessary to point out that, beyond movements or groups, there are only artists revolving around programs, artists whose works are not the equivalent but the sum total of individual characteristics. Such is the case with Arden Quin, a singular force who has produced for more than sixty years a profoundly original body of work, the fruit of his inevitable will to renew and of his back and forth between intuition and conceptualization, in an uninterrupted dialog with plane and geometric forms. Regarding this subject, I will mention that once, on a call I made to him in Paris shortly before his death, he began to talk about the triangle and the new possibilities it posed for him, as if he had just discovered it. Honestly, I was surprised, and he made me think of the commitment of someone who, at the end of his life, continues to maintain a lover’s dialog with geometry. We must not forget that his various inventions generate from intuitions the artist followed on an ongoing basis in his search for new forms. Such is the case with the works we present today, a fascinating journey that takes us to his beginnings all the way to works he completed just before his death. They are a clear manifestation of the investigation and creation of a world of mere manifestations where the artistic form materializes into something. But this materialization is not a representation but rather a presentation of what is offered to our eyes. Although, with this definition… how distant are we from a concrete perception of these works, whose presence produces the effect of a true epiphany! Their proposition is that of a singular imaginary that wraps the spectator in a concept of beauty deeply in touch with our own epoch.

Harmonious and unexpected like messages that unleash the most varied feelings, these works continue to add to the patrimony of Madí forms in the person of an artist whose subjectivity unfolds continuously and puts in objective terms the visions articulated therein as if words in an unknown language, a language Carmelo Arden Quin got us accustomed to as he meditated during his long days full of grace, echoing with precision a line of his long poem Eclimón—edited in Buenos Aires by Ed. Malvario in 2005—where he wrote not by chance in the next to the last verse: “The only thing of importance is to surpass the benchmark.” Today Carmelo surpassed the last benchmark and becomes part of history, of a myth, of a legend.