"Edward Hopper and Photography" pairs Hopper paintings from the Whitney's permanent collection with the work of contemporary photographers who share an interest in elevating everyday subject matter by manipulating light. "Collecting Calder" presents a selection of his sculptures and drawings. "Shaping a Collection: Five Decades of Gifts" focuses on artists who came to the fore between 1940 and 1990. 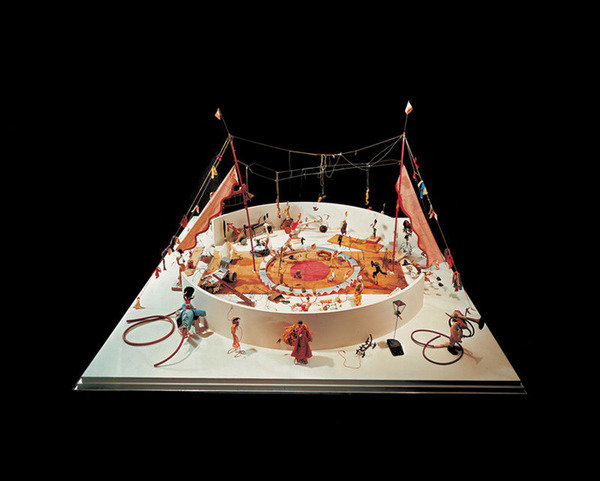 By reducing all elements in his composition to their essential geometries and treating light as a palpable presence, Edward Hopper imbued his images of everyday life with what the American philosopher Ralph Waldo Emerson called an “alienated majesty.” One of two permanent collection displays on the Museum’s fifth-floor mezzanine, Edward Hopper and Photography pairs Hopper paintings from the Whitney’s permanent collection with the work of contemporary photographers who share an interest in elevating everyday subject matter by manipulating light. The six photographers represented in this presentation, Gregory Crewdson, Philip-Lorca diCorcia, William Eggleston, Steve Fitch, Todd Hido, and Stephen Shore, record mundane subjects but endow their photographs with emotional poignancy and mystery similar to that in Hopper’s art.

Edward Hopper and Photography is organized by Barbara Haskell, Curator.

The Whitney’s collection is the largest repository of Alexander Calder’s work in the world. Collecting Calder, one of two permanent collection displays on the Museum’s fifth-floor mezzanine, presents a selection of Alexander Calder sculptures and drawings, giving equal focus to the two major aspects of the artist’s oeuvre: Calder’s Circus and his later work in abstraction. For the former, Calder employed ordinary materials—wire, string, cork, wood, paper, bits of metal, and cloth—to create a miniature circus, whose acts he staged for friends and patrons as narrator and puppeteer between 1926 and 1931. His later mobiles, inspired in part by his visit to Piet Mondrian’s studio in 1930, use an ingenious system of weights and counterbalances that allowed each piece’s suspended parts to move in response to air currents, retaining the movement of the circus performances. A selection of these works are also on view along with a group of the artist’s stabiles, or static sculptures.

From the Whitney Museum’s inception in 1930, its permanent collection has grown primarily through the generosity of individual donors, beginning with Gertrude Vanderbilt Whitney’s founding gift of more than five hundred works of art. In the five decades since Marcel Breuer designed the Whitney’s current building, the collection has expanded dramatically—from about 2,300 objects to more than 21,000 works—in large part due to donations from Museum trustees, collectors, foundations, and artists. Today, gifts comprise nearly two-thirds of the Museum’s holdings, including many works now considered to be icons. While representing only a small portion of the gifts received during the last fifty years, this exhibition honors all of the benefactors who have understood that a museum’s collection is its foundation.

Shaping a Collection: Five Decades of Gifts focuses on artists who came to the fore between 1940 and 1990, an extraordinarily dynamic period in American art. It is impossible to imagine contemporary art without the precedents set by the artists in this presentation, including Jean-Michel Basquiat, Agnes Martin, Claes Oldenburg, Robert Rauschenberg, and Andy Warhol. On the eve of the Whitney’s move downtown, this exhibition provides a small indication of the collection’s depth, soon to be seen in the Museum’s new, larger home starting in the spring of 2015.

Shaping a Collection: Five Decades of Gifts is organized by Dana Miller, Curator of the Permanent Collection.