Charles Gaines's solo show features seventy-five works from the beginning of a singular career that now spans four decades. 'Material Histories' is the most recent in a series of exhibitions featuring work of Kevin Beasley, Bethany Collins and Abigail DeVille. 'Under Another Name' considers work in multiple media, focusing on the relationship of various genres and media to one another. 'Vantage Point' presents the students' perspectives and awareness of complex power dynamics, definitions of community, internal conflicts and victories. 'Harlem Postcards' is an ongoing project that invites contemporary artists of diverse backgrounds to reflect on Harlem. 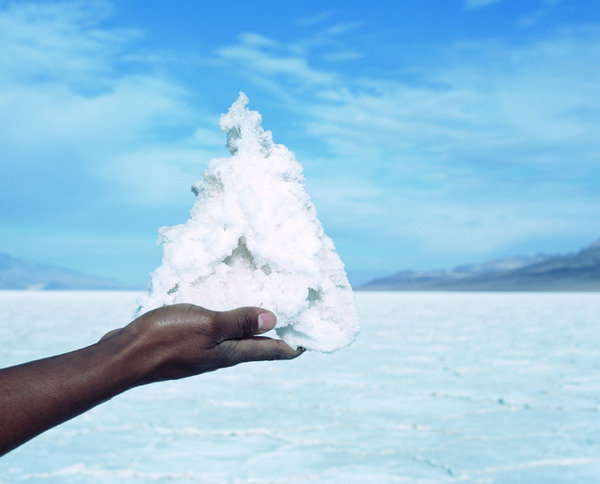 Engaging programs for audiences of all ages complement the summer exhibitions, including weekly Target Free Sundays and the ever-popular Uptown Fridays! series.

Highly regarded as both a leading practitioner of conceptualism and an influential educator at the California Institute of the Arts (CalArts), Charles Gaines is celebrated primarily for his photographs, drawings and works on paper that investigate systems, cognition and language. His early experiments examined the roles that systems and rule-based procedures play in the construction of forms, objects and meaning. Charles Gaines: Gridwork 1974–1989 traces Gaines’s career, from his groundbreaking work in the 1970s—some of which debuted in exhibitions at famed New York galleries Leo Castelli and John Weber—to his investigations of subjectivity in the late 1980s. Exploring the ways in which Gaines’s early works on paper can be viewed as a crucial bridge between the first generation conceptualists of the 1960s and 1970s and the conceptually-based practices of artists who emerged in the ensuing decades, the exhibition includes rare and never-before-seen works, some of which were presumed lost.

Considered against the backdrop of the Black Arts Movement of the 1970s and the rise of multiculturalism in the 1980s, the works in Charles Gaines: Gridwork 1974–1989 are radical gestures. Eschewing overt discussion of race, they take a detached approach to identity that exemplifies Gaines’s determination transcend the conversations of his time and create new paths in artistic innovation.

Additionally, several new media initiatives around Charles Gaines: Gridwork 1974–1989 build on the Studio Museum’s active and growing presence in the digital realm, including a tumblr and a Facebook group promoting the discussion of Gaines's art and ideas.

Charles Gaines: Gridwork 1974–1989 is generously supported by The Andy Warhol Foundation for the Visual Arts.

Material Histories is the most recent in a series of exhibitions featuring work of Kevin Beasley (b. 1985), Bethany Collins (b. 1984) and Abigail DeVille (b. 1981), three emerging artists who have been awarded eleven-month residencies at the Studio Museum. This exhibition maintains the Museum's commitment to highlighting new artistic talent and voices, and features artwork created by the 2013–14 artists in residence since they began their residence in October 2013.

Kevin Beasley was born in Lynchburg, Virginia, in 1985. He holds an MFA from Yale University (2012) and received a BFA from the College for Creative Studies in Detroit (2007). Beasley creates sculptural installations composed of found materials and refuse. He also creates works in sound that are similarly invested in physical presence. Beasley’s works have been featured in recent exhibitions, including Fore at The Studio Museum in Harlem (2012–13), Some Sweet Day at the Museum of Modern Art (2012), An All Day Event, The End at Danspace (2012), the Queens International at the Queens Museum and the 2014 Whitney Biennial.

Bethany Collins was born in Montgomery, Alabama, in 1984. She holds an MFA from Georgia State University (2012) and a BA in Studio Art and Visual Journalism from the University of Alabama (2007). Collins is a painter who focuses on dual perception and multiplicty in the seemingly binary. Her works have been exhibited in solo and group exhibitions at notable venues throughout the United States, including the Zuckerman Museum of Art, the Museum of Contemporary Art of Georgia and the Hammonds House Museum. Collins was also a finalist for the Artadia Atlanta Award.

Abigail DeVille was born in New York, New York in 1981. She holds an MFA from Yale University (2011), where she received the Alice Kimball Traveling Fellowship. DeVille received her BFA from the Fashion Institute of Technology in 2007 and recently completed a residency at the International Studio & Curatorial Program. Through bricolage, painting and sculpture, DeVille engages with material culture through found objects. Her work straddles two conceptual frames: the infinite expanse of the universe and the claustrophobic space of the urban environment. DeVille’s work has been in exhibitions at the New Museum, Contemporary Arts Museum Houston, Bronx Museum of the Arts, and Institute of Contemporary Art in Philadelphia.

The Artist-in-Residence program is at the core of the Studio Museum’s mission, and gives the institution its name. Since the Museum’s founding in 1968, more than 100 artists in residence have created and shown work in the Museum’s studios and galleries. Among the program’s alumni are some of the most renowned artists working today, including Sanford Biggers, Leonardo Drew, David Hammons, Leslie Hewitt, Kerry James Marshall, Julie Mehretu, Wangechi Mutu, Alison Saar, Mickalene Thomas, Nari Ward and Kehinde Wiley.

Under Another Name borrows its title from a line that appears in Renée Green’s letterpress print William Morris. In it, she cites William Morris, a 19th century English artist, writer, textile designer and socialist. In his novel A Dream of John Ball (1888), which Green quotes, he writes: “I pondered...how men fight and lose the battle, and the thing that they fought for comes about in spite of their defeat, and when it comes turns out not to be what they meant, and other men have to fight for what they meant under another name…”

Under Another Name considers work in multiple media, focusing on the relationship of various genres and media to one another. Here, ephemeral sculptures are captured as photographs; letterpress prints invoke the aesthetics of video; performances are recorded as drawings; sound is captured in objects; and photographs are abstracted into paintings. Rather than privileging one medium over another, the exhibition looks at their interdependence and what happens when a work is understood through the context of a new medium.

Under Another Name is organized by Assistant Curator Thomas J. Lax.

Expanding the Walls: Making Connections Between Photography, History and Community is an annual, eight-month residency in which New York–area high school students explore the history and techniques of photography. Through experimentation, gallery visits and workshops led by contemporary artists, the students build community as each explores and defines his or her art practice. Since the program’s founding in 2001, the James VanDerZee (1886–1983) archives—housed at The Studio Museum in Harlem—have been the primary catalyst for the students’ critical reflections on the representation of culture and community. VanDerZee, the iconic chronicler of Harlem during its renaissance period, documented landscapes and social groups, and cultivated a thriving studio practice that represented an emergent black middle class. Now in its fourteenth year, the program and exhibition continue to be impassioned considerations of VanDerZee’s timeless themes, and testaments to the Studio Museum’s commitment to young, emerging artists.

The title for this exhibition, Vantage Point, is a term that describes a position or place that affords a wide or advantageous perspective. Vantage Point presents the students’ perspectives and awareness of complex power dynamics, definitions of community, internal conflicts and victories. Like VanDerZee, the young artists meticulously construct works that range from realistic echoes of lived experiences to projected narratives that deliberately push perceived societal boundaries. Atzimba Xoyalta’s The Thinker (2014), for example, is an intimate snapshot, photojournalistic in approach, illustrating the self-discovery of youth, while an untitled work by Gabriella Rosen uses the language of film noir to recast everyday people as superheroes. From these diverse vantage points students both collapse and expand the notions of lived and imagined experiences.

Through their engagement with contemporary artists and museum professionals, excursions throughout New York and discussion groups focusing on the impact of art on society, students discover techniques to present their ideas to an intergenerational audience. For this exhibition, Expanding the Walls participants have selected VanDerZee photographs, displayed alongside their own, that resonate with the same sense of performance and production present in their works.

Harlem Postcards is an ongoing project that invites contemporary artists of diverse backgrounds to reflect on Harlem as a site of cultural activity, political vitality, visual stimuli, artistic contemplation and creative production. Representing intimate and dynamic perspectives of Harlem, the images reflect the idiosyncratic visions of contemporary artists from a wide range of backgrounds and locations. Each photograph has been reproduced as a limited edition postcard available free to visitors.

This season, we are pleased to feature postcard images by Kelvin De Leon, Delphine Diallo, Heather Hart and Albert Vecerka.

Uptown Fridays!
The Studio Museum in Harlem is thrilled to announce the return of Uptown Fridays! From 7 to 10pm on June 27, July 25, August 8 and August 29, visitors are invited to groove to the sounds of Libation’s DJ Ian Friday with Manchildblack and Afro Mosaic Soul in the Museum’s courtyard. Uptown Fridays! guests may browse the Museum galleries freely or on tours guided by our curators or enjoy signature cocktails and drink specials.

Uptown Fridays! has been the ideal destination for professionals, artists, curators, critics and local residents since its inception in December 2000. This festive series has grown increasingly popular over the past few years, drawing crowds of up to 900 guests per event. Uptown Fridays! are presented in conjunction with exhibitions on view and allow a cross section of writers, scholars, and critics to share diverse conversation regarding relevant themes to those of African descent. Bring a friend or come solo and make a few during a festive evening of art and culture!

The Studio Museum in Harlem
144 West 125th Street - New York, NY 10027
The Studio Museum is open Thursdays and Fridays, noon–9 pm; Saturdays, 10 am–6 pm; and Sundays, noon–6 pm. The Museum is closed to the public but available for school and group tours on Mondays, Tuesdays and Wednesdays. Museum admission is by suggested donation: $7 for adults, $3 for students (with valid identification) and seniors, and free for children 12 and under. Sundays are free at the Studio Museum, thanks to generous support from Target.