Sympathy for the Devil

Satan, Sin, and the Underworld. The exhibition explores the fascinating evolution of artists' depictions of the devil and his realm through the past 500 years. Prints, drawings paintings, and sculptures from the 16th through 21st centuries reveal the archfiend's transformation from a horned and cloven-footed fallen angel to the debonair Mephistopheles to the evil hidden within those responsible for the horrors of modern society. 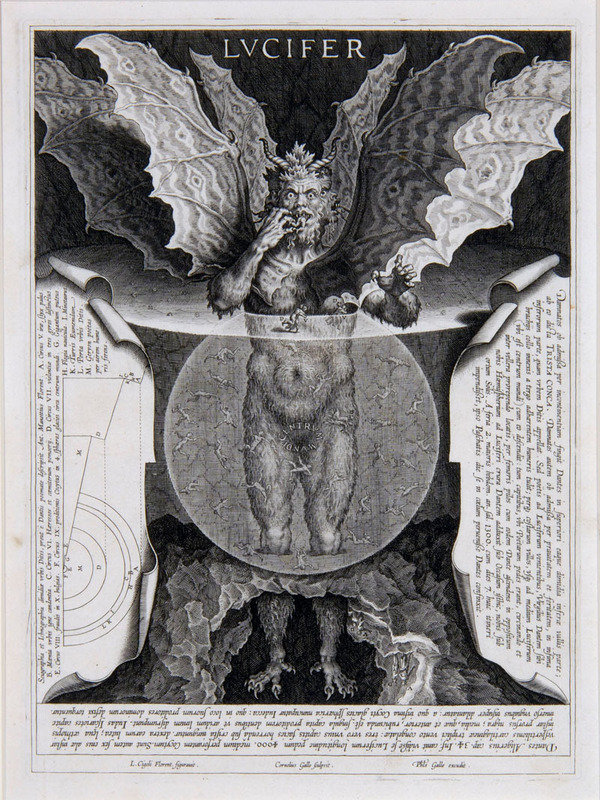 Stanford, Calif. — To celebrate the arrival on campus of Jackson Pollock’s Lucifer—one of the most important works in the new Anderson Collection at Stanford University—the Cantor Arts Center presents an exhibition that explores the fascinating evolution of artists’ depictions of the devil and his realm through the past 500 years. Prints, drawings paintings, and sculptures from the 16th through 21st centuries reveal the archfiend’s transformation from a horned and cloven-footed fallen angel to the debonair Mephistopheles to the evil hidden within those responsible for the horrors of modern society.

Sympathy for the Devil: Satan, Sin, and the Underworld includes more than 40 works, primarily from the Cantor’s collection. The exhibition opens to the public on August 20 and continues on view through December 1, 2014.

“As the keepers of the Rodin Sculpture Garden’s Gates of Hell, we thought it would be interesting to explore the visual history of the devil and his realm,” says Bernard Barryte, Cantor curator of European art. “We found that artists have had great freedom in their depictions of the devil. The Old Testament and the Christian gospels offered little specificity—only that he was a powerful, deceiving adversary of God.”

Before the 16th century, artists borrowed features from the Arcadian god Pan and from Celtic, Egyptian and Near Eastern deities. During the Renaissance, artists found inspiration in accounts by Homer, Dante and Virgil. As works on view reveal, by the 16th century the devil is generally depicted as a horned beast, as in the engraving Lucifer by Cornelis Galle. Later, when Lucifer’s revolt against God was reinterpreted as a revolt against tyranny, Lucifer evolved into a dark romantic hero as seen in Jean-Jacques Feuchère’s sculpture Mephistopheles.

Interestingly, in the 20th century, graphic representation of the devil largely disappears. Hell seemingly becomes an aspect of this world, a notion summarized in Jean-Paul Sartre’s observation, “Hell is the others.” Its denizens are ordinary people who do horrible things, as in Jerome Witkin’s painting The Devil as Tailor, in which Satan appears as a tailor stitching the attire of those involved in Nazi Germany’s Holocaust.

The exhibition also features Albrecht Dürer’s Harrowing of Hell; several versions of the Last Judgment, including a painting from the school of Hieronymous Bosch; allegories by Pieter Brueghel representing the sins that condemn people to torments by the devil and his demons; and images of witches, such as Louis Boulanger’s frenetic Sabbath, depicting those who choose to serve the Devil. Also included are images of the Greco-Roman underworld that contributed to the Christian concept of Hell as a realm of eternal punishment.

Other artists represented in the show are Hendrick Goltzius, Jacques Callot, Gustav Doré and Max Beckmann. Works are drawn from the Cantor’s permanent collection and on loan from Stanford Library’s Special Collections, Kirk Edward Long and Barbara and James Palmer.

The exhibition is made possible by support from the Halperin Exhibitions Fund.

The Gates of Hell and the Cantor’s Collection
Visitors to Sympathy for the Devil will also enjoy Auguste Rodin’s The Gates of Hell, on permanent display in the Cantor’s Rodin Sculpture Garden. The French government commissioned the monumental bronze work in 1880 as a portal for a proposed museum of decorative art. Rodin took Dante’s Inferno as his theme and worked on the project for more than two decades, incorporating motifs from the poems of Victor Hugo and Charles Baudelaire as his ideas developed. But the museum was never built, and the original Gates of Hell, now in the Musée d’Orsay, Paris, became a matrix for posthumous casts. The Cantor bronze, cast in 1985, is the fifth, and the first made using the lost wax technique.

The Cantor’s cast is also one of 20 major works in the B. Gerald Cantor Rodin Sculpture Garden, which is open all hours with lighting for nighttime viewing. The museum displays approximately 200 additional Rodin works, including the monumental Thinker, in three galleries, making Stanford’s collection of Rodin bronzes one of the world’s largest. Docents lead free tours of the Rodin Collection Wednesdays at 2 pm, Saturdays at 11:30 a.m. and Sundays at 3 p.m., rain or shine.

All in all, the Cantor’s encyclopedic collection includes more than 40,000 artworks. (See “The Cantor Arts Center,” below.)

Auguste Rodin
Among the most famous and influential artists of his age, Auguste Rodin (1840–1917) made the human body his primary subject. His Thinker may be the most famous sculpture of all time. Rodin habitually worked from nature and used his observations to create emotionally intense and evocative sculptures. Following academic tradition, his working process involved modeling figures and partial figures, but by the late 1880s he came to appreciate that a part could be as expressive as a whole and began to exhibit the fragments as self-sufficient works of art. This affinity for the partial figure, the evocative intensity of his works and his choice to retain the marks of the sculptural process on finished sculptures were revolutionary in his time. “From the 1890s until his death, Rodin was probably the most famous artist in the Western world,” says Bernard Barryte, the Cantor’s curator of European art. “His notoriety made him a focus of adulation and emulation, and for decades he exerted a profound influence.”

Lucifer and The Anderson Collection at Stanford University
Jackson Pollock’s 1947 painting Lucifer is a prime example of the abstract painter’s “drip paintings” and as such is highly regarded in the art world. The work will be on view starting in late September in the Anderson Collection at Stanford University, a new museum opening adjacent to the Cantor.

Pollock created Lucifer using a groundbreaking technique: after laying the canvas on the floor, he poured paint onto it directly from the can and also spattered on the paint, approaching from all directions. With this technique he broke the artistic conventions of both figurative representation and the use of easel and brush.

Lucifer is one of 121 works by 86 artists given to Stanford by Bay Area residents Harry W. and Mary Margaret Anderson and their daughter Mary Patricia Anderson Pence, who have spent 50 years building one of the largest and most outstanding private collections of post-World War II American art in the world. The Anderson Collection at Stanford University is anchored in the work of abstract expressionists including Jackson Pollock, Willem de Kooning, Franz Kline, Clyfford Still and Philip Guston, and extends to contemporary painters such as Ellsworth Kelly, Terry Winters, Sean Scully and Vija Celmins. Major postwar movements represented include Bay Area figurative art, color field painting, post-minimalism, California funk art and contemporary abstract painting. The collection’s proximity to the Cantor Arts Center and the McMurtry Building for the Department of Art and Art History should transform the way the arts are studied and experienced at Stanford, providing a rich resource for teaching and research and a destination for scholars and art lovers alike.

The Cantor Arts Center
The Cantor Arts Center at Stanford University is a vital and dynamic institution with a venerable history. Founded in 1891 with the university, the historic museum was expanded and renamed in 1999 for lead donors Iris and B. Gerald Cantor. The museum’s encyclopedic collection spans 5,000 years, includes more than 40,000 artworks and beckons visitors to travel around the world and through time: from Africa to the Americas to Asia, from classical to contemporary. With 24 galleries presenting selections from the collection and more than 20 special exhibitions each year, the Cantor serves Stanford’s academic community, draws art lovers from the San Francisco Bay Area and beyond and attracts campus visitors from around the world. Free admission, free tours, lectures, family activities, plus changing exhibitions make the Cantor one of the most well-attended university art museums in the country and a great resource for teaching and research on campus.

The Cantor Arts Center
Stanford campus, off Palm Drive at Museum Way
Wednesday–Sunday, 11 a.m.–5 p.m., Thursday until 8 p.m.
Beginning September 22, the Cantor will also be open on Mondays from 11 a.m. to 5 p.m
Admission is free