An exhibition project that commemorates the 800th anniversary of Francis of Assisi's trip to Santiago de Compostela. It is a significant collection of works by 35 artists, including some of the leading international figures in contemporary art of the last four decades. 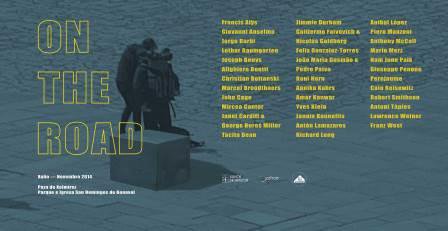 On the Road is an ambitious exhibition project, organised by the Government of Galicia, that takes place in Santiago de Compostela (Spain) between June and November to commemorate the 800th anniversary of Francis of Assisi's trip to Santiago de Compostela. The exhibition structure is intrinsically related to ideas underpinning the attitude of Francis of Assisi that are still highly topical.

The exhibition's curator, Gloria Moure, has brought together a significant collection of works by 35 artists of varying origins, including some of the leading international figures in contemporary art of the last four decades. The exhibits include site-specific pieces such as those by Francis Alÿs, Jorge Barbi, Christian Boltanski, Tacita Dean, Jimmie Durham, Guillermo Faivovich & Nicolás Goldberg, Richard Long, Perejaume or Lawrence Weiner.

Furthermore, works by renowned artists such as John Cage, Janet Cardiff & George Bures Miller, Jannis Kounellis, Anthony McCall, Mario Merz, Nam June Paik or Giuseppe Penone, amongst others, have been adapted to suit the exhibition space in which they will be shown, being lent a new dimension of expression by the uniqueness of their surroundings.

On the Road is not confined to a single exhibition space, being shared between various settings in the historic heart of Santiago de Compostela. The Palacio de Gelmírez (one of the very few examples of civil Romanesque architecture still standing) houses the core of the exhibition, reopening for this purpose after a number of years during which it has been closed to the public; San Domingos de Bonaval Church is home to a group of works that have been specially adapted to the space; and next to it, the cemetery and splendid Bonaval Park (designed by the Portuguese architect Alvaro Siza) hosts two specifically produced installations, one by Jorge Barbi and the other by Christian Boltanski.

The 44 artworks on display in the exhibition cover an extremely wide range of mediums and formats, including paintings, sculptures, photographs, installations, videos and films, and are accompanied by a specially produced publication and interventions in spaces within the city.

A catalogue (in separated editions in Spanish, English and Galician) was published to accompany the exhibition, it includes essays by José Luis Pardo and the exhibition's curator, fact sheets for each work on display and notes specifically written for the occasion by the artists that have created them, and a comprehensive set of photographs that document the site-specific works.