Flaka Haliti: an installation of imitated concrete walls with a photo series of cloud motifs including computer-drawn faces. Space & Reality is a thematic selection of key new acquisitions. Rock the Void is the first comprehensive retrospective exhibition of artist and filmmaker Josef Dabernig. 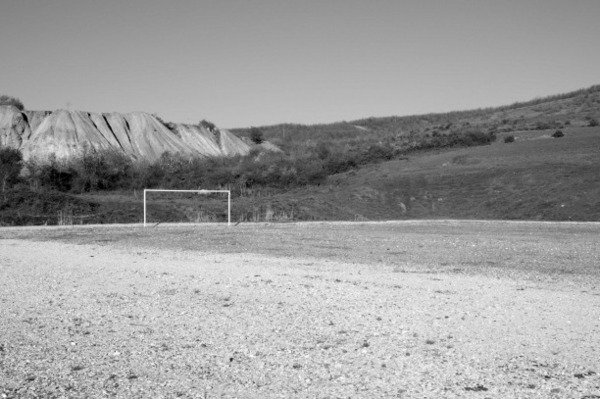 Flaka Haliti, winner of the Henkel Art. Award. 2013, takes an analytical approach to society and the media in her work, and refers in particular to her own experiences as an interloper between different countries and cultures. The artist, who was born in 1982, lives and works in her home city of Priština and also in Munich and Vienna.

By contrasting an installation of imitated concrete walls with a photo series of cloud motifs including computer-drawn faces, Haliti constructs a spatial scenario that is both menacingly narrow and constricted and yet also offers an open and broad perspective. A further work looks at interpersonal relationships between proximity and distance under the conditions of the media world, in a video installation about long-distance relationships in the internet.

The exhibition title I See a Face. Do You See a Face. is taken from the photo series with cloud motifs and poses a question that is formulated so that it can also be taken as a statement of fact. In this deliberate dissolution of all clear parameters and ascription, Flaka Haliti emphasizes her interest in initiating games between reality and fiction, and imaginary proximity and spatial distance.

With her inaugural exhibition back in 2012, Museum of Wishes, mumok director Karola Kraus made it clear that focusing on the defining elements of the mumok’s own collection would be an important feature of her tenure. Continuing in the spirit of framing the museum’s own collecting policy, in the summer months of 2014 mumok is presenting a thematic selection of key new acquisitions. The focus here is on the turn to space as a theme in art. Looking at space as a theme entails a cross-genre approach in art, aiming to bridge the divide between artistic and social reality. With a selection of new acquisitions and gifts, mumok will present thirty striking examples of the turn to space since the 1960s.

Alongside “wishes come true” from the Museum of Wishes, the show will also present new permanent loans from the Austrian Ludwig Foundation and also purchases made for mumok with the support of the Austrian Federal Chancellery, Department of Art. A special place is reserved for works from the Gertaud and Dieter Bogner collection. We will also be showing acquisitions that would not have been possible without the support of the Society of Friends of the Fine Arts or the mumok Board. Generous gifts by artists and collectors who are closely associated with mumok are also included in this exhibition.

A love of order and minimalism, rationalistic obsession, and a drive toward planned structures all seem to determine the scenery chosen by artist and filmmaker Josef Dabernig (born 1956 in Kötschach-Mauthen) for his first comprehensive retrospective exhibition in a museum. The ostentatious tidiness of this show is, however, again and again unsettled by many kinds of subtle irritation and anomaly. For this personal exhibition of his works, Dabernig has designed an architecture that extends over three exhibition levels and by means of which he can place the different blocks of his work in relation to each other. His show entitled Rock the Void will present Dabernig’s lists, his conceptual text works, and mathematically structured aluminum grids and panoramas of football stadiums, alongside film works, including his most recent film River Plate (2013), the film Hypercrisis (2011), which was nominated at the 2011 Venice Film Festival for the European Film Prize, and Wisla, Dabernig’s ode to soccer (1996), the artist’s first film, which received enthusiastic international acclaim.