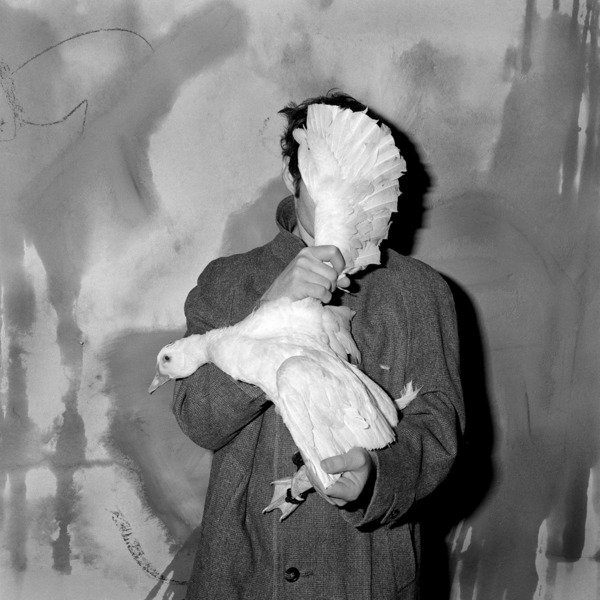 ‘The dark side is the part of the self that an individual fears to come grips with. It has nothing at all to do with evil; and being in contact with this part of consciousness can only benefit one’s sense of self. ‘
– Roger Ballen

’Asylum [of the Birds], by [South African] photographer Roger Ballen is at once arresting and compelling. The series shown [...] avoids immediate definitions while at the same causing powerful reactions.’
– The Guardian

Considered one of the most original image-makers of the twenty-first century, American-born photographer Roger Ballen has lived and worked in South Africa for four decades. His latest work, Asylum of the Birds, is set within the confines of a makeshift house on the outskirts of Johannesburg, a place inhabited by individuals at the absolute margins of society. In this anarchic place, the human and animal inhabitants collaborate as Ballen’s cast in an on going series of quasi-directed performances. As we enter Ballen’s layered netherworld the images simultaneously repel and compel our gaze and transport us to an even darker dream world, that of the fears within our own imagination.

The omnipresent birds, both alive and dead, signal a foreboding reminiscent of Hitchcock, while simultaneously suggesting hope and freedom. While the word ‘asylum’ could be defined a place of insanity, it also suggests refuge and persists in our mind as a metaphor for redemption. Says Ballen of his work; “My purpose in taking photographs over the past forty years has ultimately been about defining myself. It has been fundamentally a psychological and existential journey.” The photographer studied psychology at the University of California, and later his PhD at the Colorado School of Mines, specialising in Mineral Economics. Ballen was originally drawn to South Africa to work as a geologist, but his enthusiasm for photography strengthened, and he has been taking images there for nearly fifty years.

Ballen's underworld has recently become the setting of a music video by the South African group Die Antwoord entitled ‘I Fink U Freeky’ (with forty-eight million hits online). The exhibition also presents a short video documentary (which received over forty-thousand hits the week of its debut) of Ballen at work. The film will be on view in the exhibition. A new monograph of the same from Thames & Hudson is available for purchase at the gallery. Ballen's previous award-winning books include Platteland (1994), Outland (2001), Shadow Chamber (2005), and Boarding House (2009). A few rare copies of Outland and Shadow Chamber are also available for purchase at the gallery.

Ballen has had over 50 exhibitions worldwide, and his work is being collected by some 40 museums worldwide, including the Folkwang, Essen, LACMA, Los Angeles, Musée de l’Elysée, Lausanne, Stedelijk, Amsterdam, Victoria and Albert, London, Centre Pompidou, Paris, and the MoMA, New York, just to name a few.
’Asylum of the Birds’ has already received considerable attention at the following museum exhibitions in 2014: Fotografiska, Stockholm, the Kunst- und Kulturzentrum Monschau, Aachen, the Moscow Media Centre, Moscow, the Musée Nicéphore Niépce, Chalon-sur-Saône, the Museu Oscar Niemeyer, Curitiba, the Museum Dr. Guislain, Gent, the Museum of Contemporary Art, Rome, and the Oliewenhuis Art Museum, Bloemfontein. His film ’Asylum of the Birds’ will be shown at the ‚nuit des images’ at the Museé l’Elysée, Lausanne on the 28th of June. For 2015 exhibitions have been scheduled at the Museo de Arte Contemporáneo, Santiago de Chile and at the Museu de Arte Moderna de São Paulo, so far.

Interviews with Mr Ballen can be conducted on Wednesday, 20th of August 2014.

Opening reception for the artist and book signing of his latest publication:
Wednesday, 20th of August 2014, 6 – 8 p.m.