Kate Davis, Jessie Flood-Paddock, Katja Novitskova, Padraig Spillane and Artie Vierkant - five contemporary artists who respond to the way that objects and technologies carry the imprint of the human body. 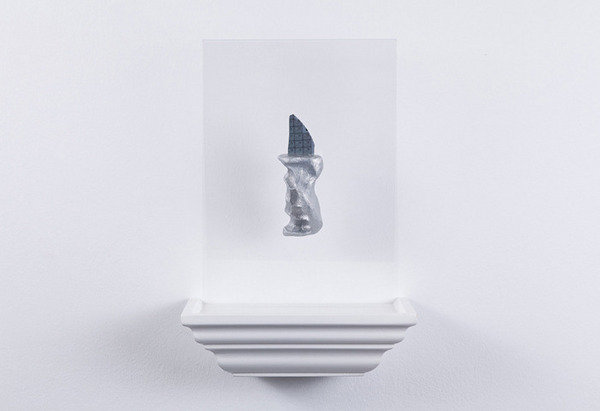 Magic Touch is an exhibition that features five contemporary artists whose works respond to the way that objects and technologies carry the imprint of the human body.

The exhibition considers our changing relationships to objects, presenting works such as Kate Davis’s video installation Denkmal, which narrates the touch of common objects that recent technology has made redundant; or Katja Novitskova’s series of sculptural works Shapeshifters made from hand-pressed epoxy clay, nail polish and broken computer wafers. In these works and others in the exhibition, there is an emphasis on the way that successive technologies create new forms of tactile relationships while disabling others.

Also included in Magic Touch are works by Pádraig Spillane, Jessie Flood-Paddock, and Artie Vierkant. Flood-Paddock will present works developed from her Nude series that elaborate a series of sculptural forms and surfaces from a cosmetics logo that promotes its own ‘invisibility’, while Pádraig Spillane’s photographic-based works make manifest what the camera fails to capture of his human subjects. For his first exhibition in Ireland / Northern Ireland, New York-based artist Vierkant will produce a new iteration of his Fingerprints series of video works that utilise digital fingerprint techniques.

Magic Touch has been developed through the recognition of contemporary displacements of the human body. This is a displacement caused by the new technologies of our inter-connected ‘touch-screen’ world, and another kind of displacement that follows recent ‘post-humanist’ philosophies that have undermined notions of human empowerment over things. As such, Magic Touch considers how the human body continues to imprint itself in new ways upon the objects and technologies that at first appear to dispel it on physical and metaphysical terms.

Magic Touch is curated by Matt Packer, Director, CCA Derry~Londonderry. It is the fourth exhibition in the CCA’s 2014 series exploring the contemporary status of the human body, following from Of Other Bodies (featuring Pauline Boudry & Renate Lorenz, Kevin Burns, and Falke Pisano), Sarah Browne: Hand to Mouth, and Eamon O’Kane: Where there are people there are things.

Opening Saturday August 2nd at 6pm
A free bus jointly organized by CCA and VOID, allowing visitors to view Magic Touch at CCA (opening at 6pm) and The Starry Messenger: Seven Artist Filmmakers at VOID (opening at 7:30pm), will run from Belfast to Derry~Londonderry and back on Saturday, August 2nd. The bus departs at 4:30pm from Golden Thread Gallery (84-94 Great Patrick Street) and returns at 10:30pm from outside Tinney’s Bar (Patrick Street). To reserve a free seat, please contact us. Places are limited.