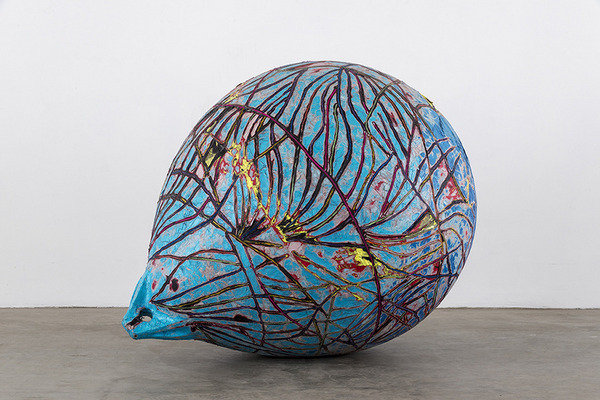 Mark Bradford: Sea Monsters presents new paintings and sculptures by Mark Bradford (b. 1961). This just-completed body of work draws upon the example of Medieval and Renaissance maps: specifically, the tendency of cartographic illustrators to use fantastical creatures to mark uncharted waters, tempting explorers to reach further into the unknown. Bradford’s abstractions do not strive for cartographic precision, but rather evoke the socioeconomic conditions of communities under siege and in a near constant state of emergency and reinvention. The seascape of paintings, inflated and failed buoys, and the monumental text-based mural that together comprise Sea Monsters were all executed in the last six months. All are made of worldly matter, yet exert an otherworldly effect, pointing at once to that which we know and everything about our world that remains a mystery. By moving back and forth between mapping social conditions in flux and refining his formal approach to painting, Bradford has derived a new language of abstraction that is as much a hermetic studio discipline as it is of and about the world we share, a language best described as social abstraction.

Rose Projects 1B | 1914: Magnus Plessen presents recent work by Berlin-based painter Magnus Plessen (b.1967) alongside the historical materials and documents of World War I that inspired this body of work. For years, Plessen has returned repeatedly to look at Ernst Friedrich’s War Against War (1924), the seminal anti-war polemic that used censored photographs to reveal the grim realities of the war, including graphic images of the facial wounds suffered by soldiers in the trenches. Plessen's figurative paintings convey the shatter and shock of the men's identity through passages of black—not abstraction per se, but a kind of blind representation. 1914 is the second in a series of three exhibitions organized by curator-at-large Katy Siegel. The series, Rose Projects 1, focuses on artists who refuse the categorical divides between representation and materialist abstraction.

The Rose's Collection in Focus series highlights and draws new connections between important and often understudied objects in the museum's collection. This semester's presentation focuses on work by women artists.

Alex Hubbard’s (b. 1975) work reflects the diversity of his practice: his paintings are sculptural, his videos painterly, and in all media his artwork is evidence of the performance of its creation. Hubbard elects to work with difficult, unpredictable materials that take directions and shapes of their own, and his paintings and videos capture his gestural process in a collage of messy marks and vibrant, visceral forms. Rose Video 04 presents Hubbard’s Annotated Plans for an Evacuation (2009) alongside a recently-completed painting.