An Alternative History of Photography. An innovative display in which the manifestos are privileged visually. In a reversal of the traditional exhibition format, 56 photographs are presented as visual captions to written statements. 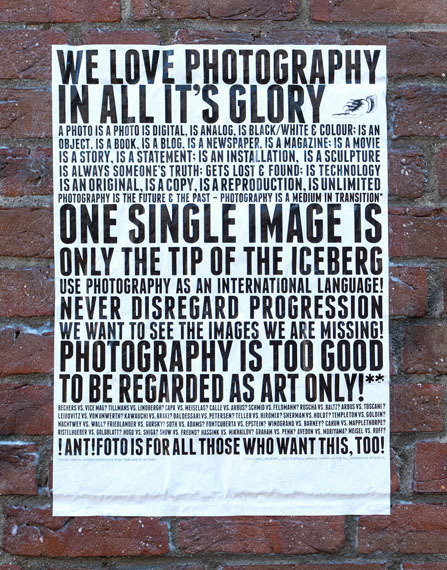 Manifesto! An Alternative History of Photography is the first exhibition to explore the historical relationship between photography and the manifesto. Comprising 56 statements written by photographers covering the whole history of photography from the 1840s to the present day, it assembles those who have something urgent to say about the medium. The result is an engaging cacophony of voices, often programmatic, sometimes angry, but always hopeful.

The manifesto is a modernist mode par excellence, tied intimately to the interruptive strategies of the avant-garde and the design and typographic innovations that were so central to its revolutionizing of artistic production. During the 1920s and 1930s, photographers, too, turned to the manifesto form, declaring a break with the past and the centrality of the medium to social and artistic transformation. Thus for the Futurists, Paul Strand, or László Moholy-Nagy, photography offered to overturn the traditional arts and to transfigure human vision altogether. For Alexander Rodchenko, Edwin Hoernle and John Heartfield, photography’s aesthetic innovation would aid in the task of changing society as a whole. There is an urgency to the manifestos of the interwar period as photographers proclaimed the significance of the medium for larger struggles.

Modernist manifestos form the core of the exhibition, but the photographic manifesto also has an intriguing nineteenth-century pre-history and a significant post-war afterlife. From its very earliest days, photographers sought polemically to declare the importance of photography to the visual arts (W. H. F. Talbot, L. J. M. Daguerre), or offer truculent advice to those who ignored the specificities of photographic practice (Peter Henry Emerson, Maurice Vidal Portman, Alfred Stieglitz). In the immediate post-World War Two period, the photographic manifesto took a subjective turn as photographers attempted to redefine the foundations of a medium tainted by wartime propaganda (Otto Steinert, Minor White). However, the manifesto would recover its political voice after 1968 and in the hands of the Situationist International, Martha Rosler or Daido Moriyama it once again declared a new direction for photography against a backdrop of widespread upheaval.

The exhibition concludes with a selection of powerful contemporary manifestos, suggesting a recent revival in the manifesto form (Ai Weiwei, Thomas Hirschhorn, Hito Steyerl, Hossam el-Hamalawy). In part a response to the rise of social media, this urge by artists to reach for their keyboards suggests that photography is once again at a point of transformation, driven by the vast algorithmic power of the digital image and the role of the medium in contemporary social struggles. Clearly, for photographers, filmmakers and digital artists the photographic manifesto still has a role to play in fermenting political and aesthetic change. As the title of a work in the exhibition by Alfredo Jaar states, ‘You do not take a photograph, you make it'.

Finally, Manifesto! pays particular attention to the manifesto form itself, presenting an innovative display in which the manifestos are privileged visually. In a reversal of the traditional exhibition format, photographs are presented as visual captions to written statements. The installation reminds us that the manifesto is never purely a textual commentary, but rather a design object in its own right, often fusing word and image. Bringing together past and present, Manifesto! presents a new history of photography. It reveals the many ways that the medium has sought to renew itself by proclaiming a different future.