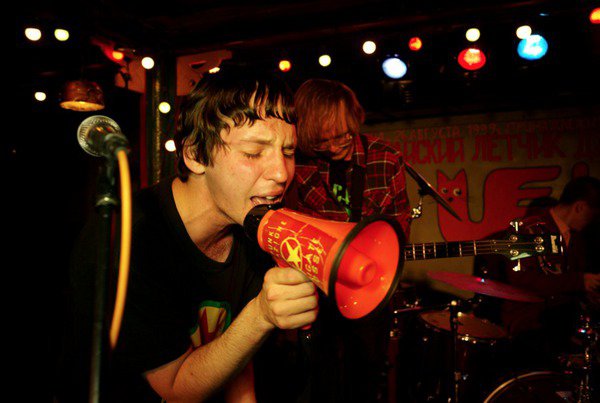 In his new project, Punk-Fraction 1, the renowned photographer Igor Mukhin combines his own works from two periods. Twenty years have passed since he captured images of the central figures of the Russian musical underground, figures who have now become legends – Tsoi, Grebenshchikov, Spider, Garkusha, NII Cosmetics, Mamonov and others. Now their place has been taken by “new punks” – PFRB, AWOTT, The Flying Guitars and others.

In 1985–1987, Igor Mukhin photographed the independent Soviet rock scene; in 2012–2014, it is as if the scene revolving around “the independents”, in small arenas, including apartment and squat concerts, is being repeated. Only time will tell whether this new generation will have the same influence on culture and the public's way of life that its predecessor did, but there is no denying the rebirth of an interest in the underground and that scene's urgency and topicality.

To document the life of the current modern scene, Igor Mukhin uses a digital camera that lacks the “charge and energy” possessed by black-and-white silver film. For this reason, the exhibition's exposition will be constructed in the form of a “game”, in which the new photographs will be used as a background for the presentation of the photographs of the 1980s, all of them coming together to create a unified installation.

The new project by Alisa Yoffe, Punk-Fraction 2, is inspired by punk. The underlying concept of punk is simple and can be expressed by the term DIY – Do It Yourself. Punk requires no interpretation, and no syntactical analysis. Punk is not a tendency or a style in the strict sense. It is, rather, a way of thinking, a means of direct expression in comparison with which any other form of self-expression appears to be an overly intellectualized, hypocritical conceit.

For her works, Yoffe has used the cheapest paper and the simplest of acrylic paints. Following the stylistics of punk depictions, she disdains color and effects, combining man-like monsters with texts across the large planes of her canvases and sheets of paper. Thanks to their size, these images compete with graffiti, and in their way they create an opposition to wall paintings, especially now, according to the artist, when “graffiti is very much in demand among municipal authorities.”