From Earth to Sky. With a selection of about 100 works, including paintings, paper works and objects, the exhibition traces the theoretical and technical path of the artist, following his central motto 'from earth to sky'. 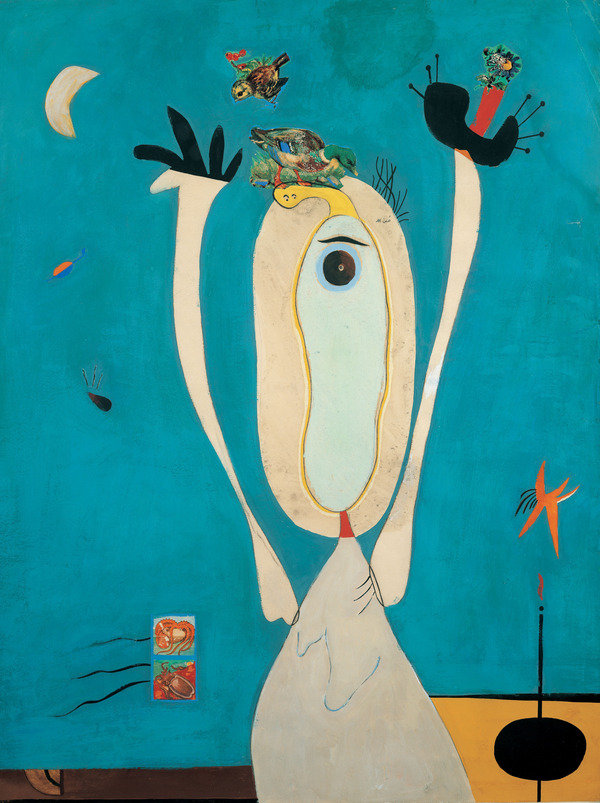 Catalan artist Joan Miró is the third of a series of prominent artists connected to Surrealism to become the focus of a comprehensive retrospective exhibition at the Albertina. Following exhibitions dedicated to René Magritte (2011) and Max Ernst (2013), the Albertina is now hosting an exhibition on Miró, which is part of a programme on artists situated within a broad definition of Surrealism, as represented in the Albertina’s Batliner Collection. With a selection of about 100 works, including paintings, paper works and objects, the exhibition traces the theoretical and technical path of the artist, following his central motto “from earth to sky”.

Like the Surrealists, Miró viewed the disjointed, post-World War Two world from a radical perspective. He was inspired by poetry, music and intuition, but, as in Surrealism, also found a point of departure for his work in his immediate surroundings. During his whole life and work, Miró was always connected to his ancestral roots, but at the same time expressed a yearning for freedom and independence, a breaking away from the constraints of background. His devotion to the Catalan landscape and a similar fascination for all things and beings formed the foundation of his work. While his paintings abound with lightness, spontaneity and poetry, they are actually the result of a deliberate working method and an affinity for the natural and original.

Although he was initially criticised by André Breton, the leading theorist of Surrealism, for his “naive“ and “intellectually limited vision of art”, it was precisely this approach which made Miró’s work appear so unburdened. Miró had cleared his perception and recognised that this child-like vision could provide the basis for serious discussion and an equally limitless and attentive fascination for all things.

Similar to so many creative paths, that of Catalan artist Miró was spurred on and shaped by a clash of opposites. This driving force, which is repeatedly stressed and perceptible in his work, was nourished by impulses from his experiences of alternating life in the country and the city – a traveller between his country house in Montroig, Tarragona, and the calm of then unspoilt Mallorca, and the visually and acoustically overwhelming, yet intellectually enriching, urban life of Paris and Barcelona.

Over 80 years, the rather calm, taciturn and reclusive artist, who was not particularly interested in social events and gatherings, preferring to devote his entire concentration and energy to his art, created works whose visual charm reveals nothing of the effort he invested in it. The lively, cheerful and striking images and objects, often resplendent with violent shapes and colours, present a contrast to the very different nature and appearance of their creator.

Miró’s life was his art. He combined the earthy and nature-bound – the “Catalan farmer“ – with the thinker, philosopher, seeker and “mystic”. The subject matter of his works often took him to a spiritual, cosmic level. This contrast provided a decisive impulse for his creativity.

Even if Miró’s work is often deemed apolitical due to his restraint and, first and foremost, to frequent comparisons to Pablo Picasso, the well-being of humanity was always of central importance to him; he fought for it in his own way. A yearning for harmony and a view that all living things should be treated with the same respect and love may not necessarily seem like topical political commentary. His goal was not the perseverance of his work, but rather the delivery of a message that would reach a broad spectrum of people.

When Miró allowed his observations of the environment to lead him to a poetic-visionary and universal world of images, reality provided a starting point, but it was never the final destination. Its transformation into a system of colours and shapes was the guiding force behind his creative vision. The imagery in his work is magical. Moons, suns, stars and comets, eyes and insects, birds and women populate his paintings, and the poetic interpretation of his interest in the earth and the cosmos can be read in these images – in the flora and fauna, and not least in mankind and his place within this world. Unlike the Surrealists, Miró did not allow unconscious material to become manifest in his work. His paintings offer private visions of the original essence of things, the world and the universe.