The exhibition brings together around 50 works belonging to Daros Latinamerica Collection, from Zurich. The works will occupy Casa Daros' entire main exhibition space on the first floor, in a circuit that will rouse spectators in multiple ways regarding the idea of illusion, through installations, videos, photographs, drawings and objects that feature a playful and often good-humored approach. 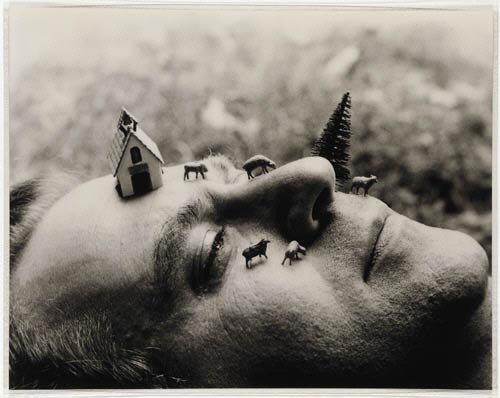 The works will occupy Casa Daros’ entire main exhibition space on the first floor, in a circuit that will rouse spectators in multiple ways regarding the idea of illusion, through installations, videos, photographs, drawings and objects that feature a playful and often good-­‐humored approach. From the “supposedly just optical nature of the mere sensory illusion,” as in the surprising short videos by Mauricio Alejo; to the “theoretically-­‐perceptively ludic character well elaborated between sign, signified and signifier,” in the works of Luis Camnitzer; the “mental (dis)illusion” of Leandro Erlich and Liliana Porter; or illusion as a “social, political, cultural, religious, market or media phenomenon," visible in works by Teresa Serrano, José Toirac and Leidy Chavez & Fernando Pareja; as well as “in all its ambiguity, in the condition of mere paradox full of absurdity with a Dadaist touch,” in José Damasceno and Los Carpinteros.

“Illusions are images of desire, fantastical images or self-­‐deception, as well. Our lives are full of them. But we don’t always like to admit this. This is why, almost as an antithesis to make survival easier, there is the concept of reality, which we like to cling onto (at times with great effort and convulsively),” said Hans-­‐Michael Herzog. “The show opens our eyes to multi-­‐faceted and complex, difficult to interpret spaces that oscillate freely between supposed reality and so-­‐ called illusion – spaces that are full of innumerous examples of fiction and projections, whose more detailed definition completely escapes any categorization."

“Perhaps art is nothing more than illusion? Or, perhaps, after all, it is real first, perhaps even more real than what is called reality? What is reality, after all? Pure illusion?," questioned the curator, adding that "Illusions" asks questions like these "without even wanting to answer them." “The exhibition is an invitation to more conscious perception, to thinking, and to a deeper understanding that can lead to far-­‐reaching insights able to sharpen our capacity to discern what reality means, what illusion means.” “Observers will also be able, in their process of perception, to learn about and recognize themselves a little better,” he stated.

MICROSITE A microsite has been specially created for the exhibition with texts and interviews with the artists, in addition to images of the work on display. By moving the mouse, web users can view the works from different angles, and there is even an interactive tool that makes it possible to comment and share the photos. To visit the microsite, go to: www.illusions.casadaros.net.

The show will be accompanied by a 48-­‐page publication, 15cm x 21cm, with photos of the works and texts by Hans-­‐Michael Herzog, artists Luis Camnitzer and José Damasceno, art critic Orlando Britto, and Katrin Steffen, who also conducted interviews with the artists.

WORK/ARTISTS
In their 2012 work, “Untitled,” Colombian artist duo Fernando Pareja & Leidy Chavez (Fernando Pareja, 1979, and Leidy Chavez, 1984, Popayán, Colombia) built a variety of kinematoscope, with strobe lighting, in which wax dolls appear to fall into the middle of an incessantly turning wheel.

“The Following Omen (Experiment about the Visibility of a Dynamic Substance),” by Brazilian José Damasceno (1968, Rio de Janeiro), created in 1997, has only been shown twice in Brazil: the year it was made, during the collective show "Intervals," at Paço das Artes, and in 2000, at the "Rediscovery: Brazil +500" show, both in São Paulo. Internationally, it was presented in 2001, at the “Experiment Experiencia” show at the Museum of Modern Art in Oxford, England and “Al calor del pensamiento -­‐ Obras de la Daros Latinamerica Collection,” (In the Heat of Thought -­‐ Works from the Daros Latinamerica Collection,” at the Santander Bank Foundation, in Madrid, in 2010. In the text, “Un altro attimo,” written by the artist in 2001, he states that “reality, or what is conventionally called real, has innumerous strata, layers, dimensions, densities, states, porosities and channels, with a brutal structural complexity that moves, grows and is modified according to another immense universe of distinct points of view.”

In his 2005 video “Opus,” a little over five minutes long, Cuban artist José Toirac (1966, Guantánamo) show a succession of numbers in black and white, all accompanied by audio from speeches by Fidel Castro, with his unmistakable voice. In this way, the interminable rhetoric of his paternalist discourse is reduced to a variety of “minimalist sono-­‐numerical illusion," with doses of humor.

By Argentinean artist Leandro Erlich (1973, Buenos Aires), there will be three installations: “Stones” (2003), “Changing Rooms” (2008) and “The Doors” (2004). In “Stones,” the audience sees footsteps in movement on a floor covered with pebbles. In “Changing Rooms,” the artist built a series of changing rooms where, upon entrance, visitors are confronted with infinite views and reflections of themselves. In “The Doors,” spectators find several closed doors, in which light enters from a crack, intriguing them. The artist observes that “cinema has influenced our imagination in multiple ways and has also been able to generate a collective memory.” “There are times when we feel like we’re living in a piece of fiction, fiction we identify as cinema. Oscar Wilde’s essay about life imitating art has never been so relevant.” He comments that “revealing the trick is a way of reducing the importance of the phenomenological and inviting a conceptual interpretation of the work.”

Liliana Porter (1941, Buenos Aires) creates in her prints “Nail” (1972), “Stitch” (1970), and “Scratch” (1974) a “visual trick”, in which you can confuse a printed nail with a real one, or the image of a shadow with a real shadow. “What interests me in this visual confusion is questioning the substance of reality and time. That is, the distance between words and things,” the artist said.

The previously unexhibited installation "16m" (2010), by Los Carpinteros, the Cuban duo made up of Marco Antonio Castillo Valdés (*1971, Camagüey) and Dagoberto Rodríguez Sánchez (*1969, Caibarién), consists of 200 black blazers, irregularly drilled through on the right. Lined up and hung along a metal pole, together they create a 16 meter long hole.

“Illusions” brings to Brazil for the first time a generous set of work by conceptual artist Luis Camnitzer (1937, Lübeck, Germany, raised in Montevideo). In all, there are 31 works, including a dozen of his famous “boxes.” Luis Camnitzer states in his text, “The Artist, the Scientist and the Magician,” from 2011, that “setting aside cultural deformations, if we refer to cognitive concepts the only difference between art and science is that in art we can work without having to use logic as a reference, and we can suspend the cause-­‐effect relationship. That does not mean that distancing those two conditions exempts us from the demands proposed to scientists. Artists should also be responsible, they have to serve the common good, be rigorous and able to submit accounts.” “Magicians, not artists, are the extreme opposites of scientists. This is because the essence of the magical act lies in the ability to hide the process and keep it secret,” he continued. “Whereas scientists work to explain the incredible. Magicians look to simulate the incredible. Artists apply themselves to presenting the incredible so as to expand the world of the credible."

In an interview with Katrin Steffen, Mexican artist Mauricio Alejo (1969, Mexico City) commented on his short-­‐short videos being shown at the exhibition – “Crack” (2002), “Line” (2002), “Twig” (2003), “Red” (2003), “Hole” (2002) -­‐ “They’re about optical illusions.” But he emphasized that “The verbal also plays an important role: a title isn’t just a description, but an instruction about what one should be seen." “The verbal has a structure and authority the visual lacks. When a certain point of the action is reached, there’s a split that goes from the verbal to the visual, leaving spectators vulnerable and open to relating in a less prejudiced way to the materials. When that happens, I like how basic the experience becomes.”

Three of the four works by Teresa Serrano (1936, Mexico City) in “Illusions” are related to the head: “5 Rolling Stones” (1999), five balls covered with different wigs; “Blown Mold” (2012), four hats symbolic of the Catholic Church – the skullcap, mitre, biretta and Saturn hat – in blown glass; and “Of the Same Diameter,” (2012), three head coverings of the same diameter used by three big monotheistic religions: Christianity, Judaism and Islam. In "Mouth of Plank” (2007), a nearly 13-­‐minute long video in black and white, we see a woman in a repetitive routine inside a house.