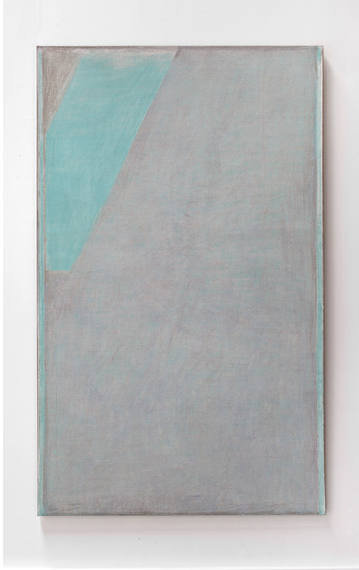 The University of California, Berkeley Art Museum and Pacific Film Archive (BAM/PFA) presents MATRIX 255, featuring a new selection of paintings and watercolors by John Zurier. The Bay Area artist paints abstract, seemingly monochrome canvases with colors that range from muted earth tones to vibrant hues. Interested in capturing the various effects of his environment and translating that into paint, Zurier utilizes a range of materials, brushwork, and surface treatments to create a subtle balance between color modulation and spatial depth. In this presentation, his first solo exhibition in a museum, Zurier premieres a new series of paintings made during or after his sojourns to Iceland, where he has been traveling, teaching, and making work in recent years.

Zurier’s minimalist, contemplative compositions are as complex as they are spare. From the differences between cotton and linen surfaces, the thickness of the stretcher, and the hardware that binds the work together to the individual properties of tempera and oil paint, every aspect and detail of his compositions is considered. In his varied practice, color stands out as one of his primary concerns and his reflection on a given color often propels his approach. Some pieces develop within days, while others evolve over extended periods of time. Informed by such diverse influences as Abstract Expressionism, Italian Renaissance painting, Minimalism, Japanese painting, and poetry, each of Zurier’s works strike “a unique, sensitive chord,” according to the exhibition’s curator, Apsara DiQuinzio.

In recent years, Iceland—a place he has been visiting regularly since 2011—has been a primary source of inspiration for the artist. Zurier is fascinated with its vast, ever-changing landscape and, in particular, the effects of time, weather, and light. This past summer, Zurier produced a series of paintings in various sizes on an Icelandic horse farm in the northern region of Skagafjörður. These luminous abstractions evoke the ice, fog, skies, ground, water, and atmosphere of the landscape while also tapping into more timeless, poetic states. MATRIX 255 features many of these works, as well as others Zurier painted during or after previous trips to Iceland.

On November 7, Zurier will join DiQuinzio in the galleries for a conversation about the his practice and influences. The talk will be immediately followed by a special L@TE: Friday Nights @ BAM/PFA event programmed by Zurier that will include new electro-acoustic compositions by Icelandic composers Úlfur Hansson and Georg Hilmarsson and Bay Area composer Amadeus Regucera. Commissioned by Zurier to accompany his paintings and watercolors, the new works will be performed by the all-cello chamber ensemble Celli@Berkeley.

About the Artist
Born in Santa Monica in 1956, Zurier received both his BA (1979) and MFA (1983) from the University of California, Berkeley. Over the past several years Zurier has had solo exhibitions at Peter Blum Gallery, New York; Gallery Paule Anglim, San Francisco; Lawrence Markey Gallery, San Antonio; Galerie Nordenhake, Berlin; Patrick de Brock Gallery, Knokke, Belgium; and Galeria Javier Lopez, Madrid. In 2012, he was featured in the 30th Sao Paulo Biennial, The Imminence of Poetics, as well as in 2008, Annual Report: A Year in Exhibitions, the 7th Gwanju Biennial, South Korea. Other recent group exhibitions include El Genet Blau (The Blue Rider), JiM Contemporani, Barcelona (2011); 2010 California Biennial, Orange County Museum of Art, Newport Beach; Le Tableau, Cheim and Read Gallery, New York (2010); and Galaxy: A Hundred or So Stars Visible to the Naked Eye, UC Berkeley Art Museum and Pacific Film Archive (BAM/PFA) (2009); and the 2002 Whitney Biennial, Whitney Museum of American Art, New York. The artist lives in Berkeley and works in Oakland, California. MATRIX 255 is Zurier’s first solo exhibition in a museum.

The MATRIX Program is made possible by a generous endowment gift from Phyllis C. Wattis and the continued support of the BAM/PFA Trustees.