The islands of Yuri Sobolev 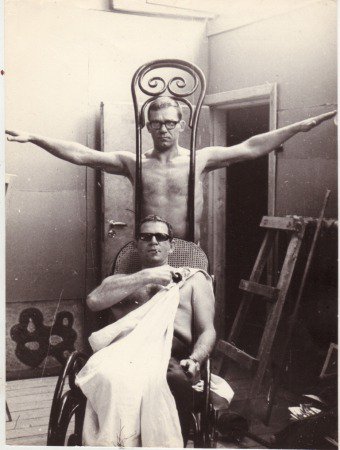 The MMOMA exhibition “The Islands of Yuri Sobolev” is a continuation of the series of projects on the history of Russian contemporary art dating to the latter part of the 20th century. A retrospective of the work by Yuri Sobolev (aka Yuri Nolev-Sobolev, 1928-2002) will be held at the museum venue in 17 Ermolayevsky Lane. The exhibition comprises graphic works, book and magazine illustrations, animated cartoons and slide films. It also includes video and photographic documents pertaining to the artist’s work for theatrical productions: video footage of a multi-screen show for ICSID World Design Congress (1975); slide films for the following theatrical productions: What Happened after the Rescue (1987-1988), Post (1981), and ODMO (1988) portraying the new wave of 1980s artists. Materials pertinent to the performances of the students of the Yuri Sobolev School, and those relating to the KukArt festival and the archives are also part of the exhibition. Exhibits displayed at each floor of the venue correspond to the particular period of the artist’s career.

The works on view span more than forty years of Yuri Sobolev’s career. It is worthy of note that Russia’s contemporary art has been around just a little bit longer. The artist’s strategy rested on his pursuit of modern approaches and novelty, the above striving mostly formed the concept of his art. The idea of combining classical art and today’s world images in the same centerfold, in the same cover or a frame – the technique that became all the rage several decades later – that idea dawned upon the artist far too early. Sobolev used a variety of media for reproducing that method in his original graphic works, on the pages of Znaniye-Sila (Knowledge Is Power) magazine, in the sketches for the animated film Glass Concertina (1968) directed by Andrei Khrjanovsky, in the annual publication Nauka i Chelovechestvo (Science and Humanity) of 1962 and 1963, and in several other works. Sobolev transferred the strategy based on the tradition of avant-garde editing pioneered by Sergei Eisenstein and Alexander Rotchenko into an area of multimedia experiments – the totally new and unexplored area as far as the artists of the 1960s and the 1970s were concerned.

A multi-screen slide film made by Yuri Sobolev in collaboration with the director Yuri Reshetnikov for the 1975 Congress of the International Council of Societies of Industrial Design (ICSID) became the summit of the artist’s quest for new ways of the artistic expression. The congress took place in Moscow’s Rossiya cinema and concert hall. The multimedia show running more than 40 minutes on 30 screens was concocted of the images showing modern mechanisms and consumer goods. The images, which had been borrowed from the Western catalogues, were cut together with the images of artwork dating to different times. Despite the revolutionary use of a multiscreen in terms of technology and aesthetics – the multi-screen projection involved 16 slide projectors – the ICSID show was eventually banned by the authorities who deemed it ideologically questionable. Aside from taking the opportunity of seeing the video footage pertinent to that ambitious project, the spectator will also have a chance to take a closer look at the preparatory materials explaining the workings of the unique design.

The experiments in the field of new media took place while the artist was giving shape to his own plastic language. During his stint in the magazines Dekorativnoye Iskusstvo (Decorative Art) and Znaniye-Sila, Sobolev was one of the first USSR artists who started using a modular grid i.e. the Western design novelty technique for arranging a magazine page. He made good use of the technique as to his art too. In his oeuvre the grid became part of an artwork on purpose; the grid would have several levels/layers so that it could help reveal the artist’s ideas. Utilized thus, the pencil grid was transformed from the universal technical means to an artist’s module/sign for the purposes of modeling a “microcosm” of a graphic sheet.

“The Islands of Yuri Sobolev will enable one to witness how certain ideas and approaches that had been brought forth through the artist’s experiments with a particular medium eventually resulted in most unusual discoveries in the course of his work with other media. The exhibition whose core consists of the Yuri Sobolev family collection and archive also includes the works provided by courtesy of the Moscow Museum of Modern Art, the State Tretyakov Gallery, the Cinema Museum, National Center for Contemporary Arts, and Kolodzei Art Foundation. Several pieces of art and archival materials are also on display by courtesy of foreign and Moscow private collectors.

Yuri Sobolev was one of the key artists who helped to bring about the Russian contemporary art in the latter part of the 20th century. The majority of his projects proved to be ahead of the times. The artist has been largely unknown to the public as yet. The 1960s saw him participating in the legendary exhibition marking the 30th anniversary of the Moscow Artists’ Union. The exhibition was severely criticized by Nikita Krushchev for “avant-gardism.” In collaboration with his friend and studio’s neighbor Ulo Sooster, the artist was actively experimenting in a variety of styles and trends of the 20th century art. Aside from indulging in Surrealism and Dadaism by drawing pictures, the friends would also throw extravagant happenings in a Moscow café called Artisticheskoye (Artists’ Café) in a bid to reconstruct the bohemian atmosphere of Cabaret Voltaire. Sobolev’s apartment in downtown Moscow nearby Kirovskiye Vorota Square (nowadays called Myasnitskiye Vorota Square) became the site of “Nolev Ark” (1960-1961). It was the place that attracted artists, poets and jazz musicians, not to mention the regular circle of friends. The “Ark” drew in the like-minded neighbors before long. The friends – the artists who were lucky to get their studios in Sretensky Boulevard neighborhood (Ilya Kabakov, Ernst Neizvestny, Ulo Sooster, Viktor Pivovarov, Vladimir Yankilevsky, Anatoly Brusilovsky) formed the eponymous community. Many of them soon got united around the magazine Znaniye-Sila, in which Sobolev worked for 13 years as chief artist. From 1980 to 1990, Yuri Sobolev staged theatrical productions in theatres of the “Urals Zone” in collaboration with the director Mikhail Khusid. In doing so, he participated in a nonconformist yet notable reform movement in the Soviet puppet theatre art of the 1970s – 1980s. In 1990, Sobolev moved to St. Petersburg to keep on staging theatrical productions in the frame of Interstudio, the International Studio of Synthesis and Animation, which was founded in collaboration with M. Khusid. Since 1993 he was also an art director of the KukArt Festival of Theatre, Music and Visual Arts. In 1994, at the St. Petersburg Academy of Theatre Art, he handpicked a class of artists to teach them a new course comprising lectures on the history of modern art, performance, video art etc. The “Yuri Sobolev School”, which also included practical training and participation of students in exhibitions, became the first education project of its kind in this country.

Anna Romanova is an art historian and an independent curator. She authored several publications on contemporary art. She worked as senior research fellow in the Department of New Art Trends of the State Tretyakov Gallery from 2001 to 2006.

Galina Metelichenko-Soboleva is an artist, a designer, a teacher, and a curator of the course “Graphic Design and Advertising” in the International School of Design in St. Petersburg. She works in the field of video art since 1996.