'Dailies by Thomas Demand reflect the pervasive photo-snapping culture of the present day, the current urge to seize and share any momentary scene or event. "Arte Povera and multipli" explores the idea of the multiple as the driving force behind a new form of artistic production. Also on show a solo exhibition by Thomas Scheibitz. 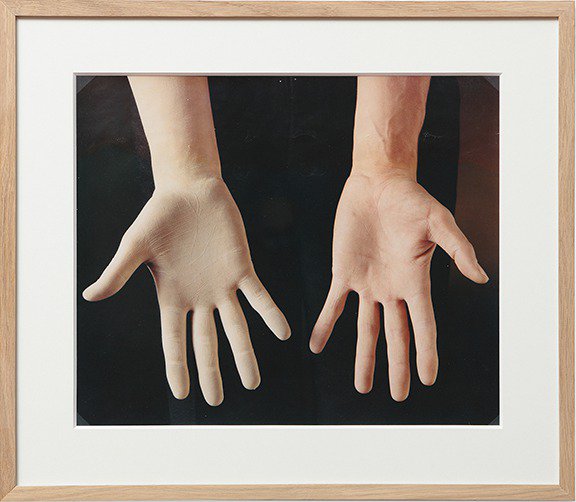 Since 2008 Thomas Demand has been making the Dailies, a series of photographs developed from pictures he has taken on his camera phone. Best known for large-scale photographs of life-sized models built by the artist, which might portray an interior space linked to the news or recent history, the Dailies see Demand turn his attention to the overlooked details of everyday life. The printed works are relatively small, yet achieve an intensity that goes beyond their source material: phone snapshots of minor, offhand scenes, such as a laundry line or an abandoned ice-cream cup. The Dailies have been exhibited widely, from Australia to New York, as well as Sprüth Magers London, in 2012. This is the first time they are exhibited in Germany and will include the two latest works, Daily #22 and #23 (both 2014).

The everyday subject matter is put into sharp relief by the richness of the colours, which Demand achieves by making each print with the labour-intensive method of dye-transfer, a process that involves fixing dyes with gelatine to ordinary paper. Demand chose this process for its saturated colours, spatial depth, intense darkness, as well as the durability of the pigments, all elements that serve to emphasise the formal power of the photographs. Even if the photograph depicts little more than an ephemeral model of a straw and cup lid tossed onto the pavement, the print itself is a delicately crafted object.

The Dailies reflect the pervasive photo-snapping culture of the present day, the current urge to seize and share any momentary scene or event, yet Demand brings a forceful intensity to these everyday scenes. The full contrasts and dynamic compositions often bring to mind modernist and geometrical abstraction. A bathroom mirror, reminiscent of a restaurant anywhere, becomes an angled grid, suggesting a Suprematist composition. Venetian blinds, messed up and radiating a blue glow, could be a readymade Rothko. A clear plastic glass, half-full of yellow liquid, sits precariously on a windowsill. Partially reflected in the window behind it, the composition is as tense and balanced as the scene it depicts. In one of the two recent works Daily #22, a small ice-cream cup sits abandoned on a ledge, the handle of its purple spoon extending into the foreground, casting a small shadow. Behind, the vertical lines of a dark grey barrier intersect with the dull beige of a ledge. A gentle shadow wraps itself around the white ice-cream cup, creating a compact area of subtle tonal gradations. Above all, this is a spatial construction, an abstraction attentive to tone, composition, and internal coherence. The Dailies highlight these spaces of everyday beauty, suggesting that even a glimpse of a disposable scene can be transformed into an object of infinite contemplation.

Sprüth Magers Berlin is concurrently presenting the solo exhibition Radiopictures by Thomas Scheibitz and the group show Arte Povera and 'Multipli', Torino 1970-1975 curated by Elena Re.

Curated by Elena Re

In 1970 Giorgio Persano opened Multipli, his first gallery in Torino. Multipli was exceptional for its time. Working with Arte Povera artists and with other Italian artists linked to the conceptual art of the era, Multipli produced a significant body of multiples from 1970 to 1975. Persano and his artists did not view the multiple merely as a means to circulate or multiply the image through the reproduction of an original. The gallery was founded, rather, on the notion that a work of art could be democratic. Although each piece was made as part of a series, each object would also retain the characteristics and aura of a unique piece. Curated by Elena Re, Sprüth Magers Berlin presents an exhibition that focuses in particular on artists associated with Arte Povera, exploring the idea of the multiple as the driving force behind a new form of artistic production.

The artists who made and exhibited work at Multipli were Giovanni Anselmo, Alighiero Boetti, Pier Paolo Calzolari, Giulio Paolini, Giuseppe Penone, Michelangelo Pistoletto and Gilberto Zorio, as well as Marco Gastini, Giorgio Griffa, Claudio Parmiggiani and Salvo. The artists did not develop a collective or specific medium for their works, but helped to transform the multiple into a historically important genre by developing a range of different techniques. Anselmo, for instance, worked with soil, Zorio incised cowhides, Salvo created marble plaques, Calzolari made installations with felt, golden thread and a rose, Penone used his forearm to make marks as a starting point to conceive a range of works, while Pistoletto started experimenting with screenprints on stainless steel. The gallery developed into a workshop for the production of works that were created especially as limited edition multiples, fashioning that combination of uniqueness and freedom that they strived to achieve. Apart from the reproducible nature of the work, and the innovative gallery model, the most important result was the quality of the work that emerged. This was due to the systematic, constructive engagement among all the artists, who worked together to create a new form of art.

The works produced by Persano’s Edizioni Multipli have been exhibited in various shows over the last twenty years, including Arte Povera: Les multiples 1966-1980, Musée d’Art Moderne et d’Art Contemporain, Nice (1996); Che fare? Arte Povera –The Historic Years, Kunstmuseum Liechtenstein, Vaduz (2010); Light Years: Conceptual Art and the Photograph, 1964-1977, The Art Institute of Chicago (2011). Arte Povera and ‘Multipli’, Torino 1970-1975 is, however, the first show that focuses exclusively on Persano’s gallery. Elena Re – who is concurrently working on a larger, comprehensive analysis and exhibition of Multipli – has curated a show of representative, historical works in order to shed light on the distinctive nature and importance of Multipli and its era. Alongside the multiples themselves, the exhibition will be expanded with the display of a range of objects and documents, including books, magazines, invitation cards, information sheets and photographs.